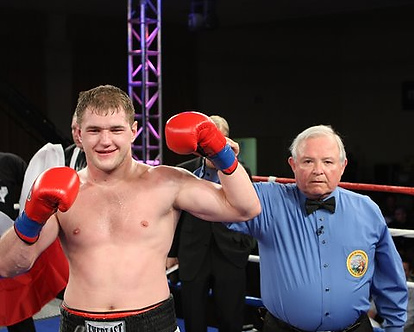 So it was fitting and ironic that the last bout to air on the long series would be heavyweights. Andrey Fedosov stopped Donovan Dennis in the eighth round before a crowd gathered on a cold Friday night at the outdoor Omega Products International. Fedosov (28-3, 23 knockouts) won the Boxcino heavyweight title and earned a top 10 ranking by the WBA.

Both fighters breezed through their quarter and semi-final bouts that took place earlier this year. Fedosov, originally from Russia and now living in Hollywood, Calif., was the favorite entering the tournament, but Dennis carried momentum his way, including his highlight-reel second round knockout over Razvan Cojanu on April 10.

Both fighters had their moments in the opening two rounds, but Fedosov was able to drop the southpaw Dennis (14-3, 11 KOs) in the opening moments of the third round with a right cross to the head. Dennis was able to get up and rally before the end of the round.

Dennis was able to find some success in the middle rounds, landing left hands to the head of Fedosov. In the seventh round, Fedosov was able to swing momentum in his favor, hurting Dennis in the last minute of the round.

“I was waiting for the counter and finally I got it,” Fedosov said after the fight.

He was able to capitalize on that moment about 40 seconds into the eighth round. Fedosov landed a lead, overhand right to the chin of Dennis, dropping him to the canvas. Dennis stood up, but referee Thomas Taylor waved the fight over at 54 seconds.

“It’s a big value for me, but bigger for my family. I’m going home tomorrow to Russia and I’m hoping to get a big fight soon.”

The bout concluded a 17-year run for the “Friday Night Fights” series. Boxing will return to ESPN on July 11, with the premier of “PBC on ESPN.”

John Thompson survived a first-round knockdown to stop Brandon Adams in the second round. With the win, Thompson was crowned the 2015 Boxcino junior middleweight champion.

Thompson was a late-sub in the tournament, taking the spot of Cleotis ‘Mookie’ Pendarvis when Pendarvis was overweight in his quarterfinal bout against Ricardo Pinell.

Things did not start well for Thompson in his bout against Adams, as he was dropped in the opening moments of the first round. A left hand to the body followed by a right hand to the head dropped Thompson to the canvas. Thompson recovered well and had moments of his own to end the round.

“After the first round, my corner told me to stick to my game-plan,” said Thompson after the fight.

Midway through the second round, a series of lefts from Thompson dropped Adams to the canvas. Adams got up, but was met with a heavy barrage of punches from Thompson, some that hurt Adams against the ropes. Referee David Mendoza stepped in and administered an eight-count, but it was only a matter of time before Thompson rained down more punches. A barrage of punches stunned Adams again, this time prompting Mendoza to step in and stop the bout at 2:18.

“I figured he would punch himself out by the third or fourth rounds. I knew when he was hurt, his peripheral vision was not going to be good, so I threw left hooks. This is a new beginning. I was meant to be here.”

The southpaw Zarate landed the telling blows in the first half of the fight, countering Fuentes to the head with lefts and eventually attacking the body in the middle rounds. Fuentes came on at the same time, landing his share of punches to the body and pressing the fight. Zarate slowed down considerably in the last two rounds, but did enough to get the nod on the judges’ scorecards. All three judges scored the bout 58-56 in favor of Zarate.

– Lightweight Angel Martinez (6-1-1, 2 KOs) stopped Andres Fabian Figueroa in the fifth round. Martinez dropped Figueroa (5-1, 3 KOs) with a right and finished him off at 1:09.

– Bantamweight Humberto Rubalcava (2-0, 2 KOs) stopped Richard Tallmadge, who was making his pro debut, at 1:08 of the first round.

– In the walkout bout of the evening, welterweight Isaac Freeman (2-1, 2 KOs) stopped Eridani Leon (2-2) after the second round. Freeman dropped Leon twice in the first round and possibly broke Leon’s nose during the fight.