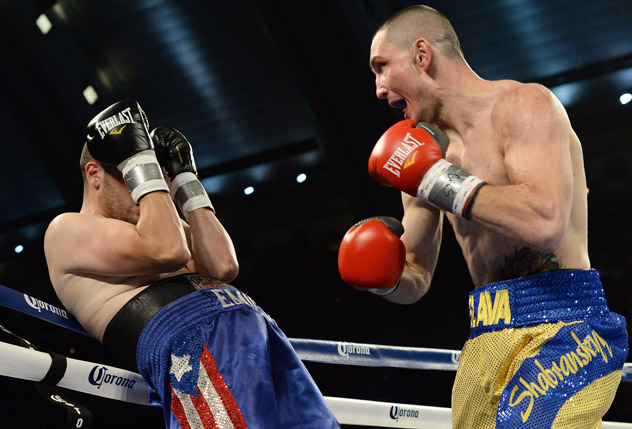 Born in Ukraine, Shabranskyy (13-0, 11 knockouts) has fought mostly in and around his adopted hometown of Los Angeles; he will be fighting for the third time in 2015. In his last outing, Shabranskyy picked up the USNBC belt with a fifth-round stoppage of the previously undefeated Fabiano Pena.

“This will be my first headlining event and I am ready to entertain and prove to all the fans in Philadelphia that I am worthy of my title and am a serious contender in the light heavyweight division,” said Shabranskyy in a press release.

Shabranskyy’s opponent for his 10-round bout on June 30 has not yet been named.

Ballard, a 2012 National Golden Gloves champion from Maryland, will be in his tenth bout since turning pro in February 2013 — eight of his nine wins so far have come by knockout — and will fight an eight-rounder against an opponent still to be determined.

“Golden Boy Promotions is happy to return to Philadelphia for this exciting night of fights on June 30,” said GBP president Oscar De La Hoya. “Philadelphia is a fight fan’s town, with a rich boxing history, so I’m thrilled to return to the city for this event for Golden Boy Live!”

Opening the broadcast will be 19-year-old lightweight Lamont Roach Jr. (7-0, 3 KOs), of Maryland, in a six-round bout against Christian Santibanez (3-4, 2 KOs), who hails from San Antonio.

The untelevised portion of the card will feature six-round bouts with Maryland junior lightweight Kevin “K-Smoove” Rivers and Philadelphia junior welterweight Damon Allen, both undefeated. Victor Vasquez, a local lightweight, will fight as well, and South Korean transplant Gang Yong Kim will open up the card in a four-round lightweight bout.