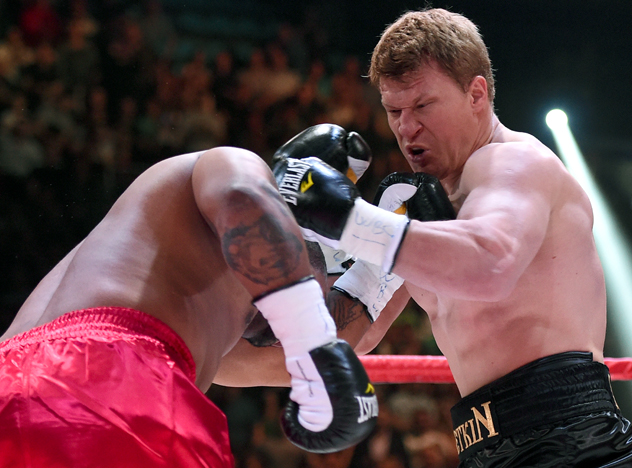 22
May
by Doug Fischer

THE RING’s No. 1-rated heavyweight, Alexander Povetkin, made short work of Mike Perez, stopping the former Cuban amateur standout in the opening round of their WBC title-elimination bout on Friday in Moscow, Russia.

Povetkin (29-1, 21 knockouts) hurt Perez with a right hand and put the southpaw down – and flat on his back – with two follow up rights. The 29-year-old Cuban barely beat the 10 count and got up on very unsteady legs. He was quickly sent crashing into the ropes where referee Massimo Barrovechchio waved the fight off at 1:31 of Round 1.

The shocking KO was the third straight victory for Povetkin since the 35-year-old Russian dropped a unanimous decision to RING champ Wladimir Klitschko in October 2013. Perez (21-2, 13 KOs), THE RING’s No. 8-rated heavyweight, was one fight removed from a split-decision loss to Bryant Jennings last July.

Povetkin, who won a gold medal at the 2004 Olympic Games, solidified his place as the mandatory challenger for newly crowned WBC titleholder Deontay Wilder, who is scheduled to make his first defense against unheralded Eric Molina on June 13.

On the Povetkin-Perez undercard, THE RING’s No. 2-rated cruiserweight Grigory Drozd defended his WBC title for the first time with a ninth-round stoppage of Lukasz Janik. Drozd (40-1, 28 KOs), a 35-year-old Russian veteran, won the title with a unanimous decision over Krzysztof Wlodarczyk last September.