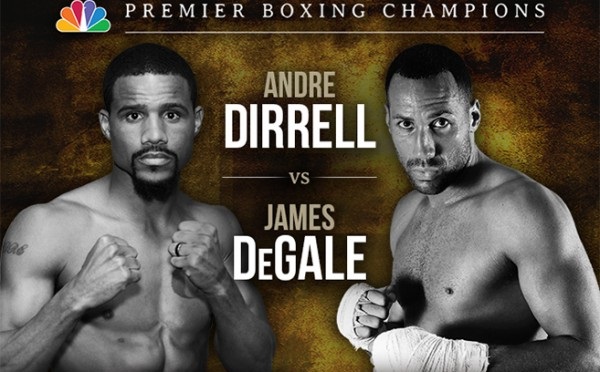 21
May
by Coyote Duran

James DeGale battles Andre Dirrell for the vacant IBF super middleweight title on Saturday at Boston University’s Agganis Arena. The “Premier Boxing Champions” card will be broadcast on NBC at 4:30 p.m. ET/1:30 p.m. PT, while in the UK on Sky Sports at 8:00 p.m.
The bout is expected to be keenly contested, pitting a pair of Olympic medalists — DeGale, gold in 2008 and Dirrell, bronze in 2004.

Both are southpaws with impressive speed and good fundamentals. Each has fought in big fights before. This finely poised chess match may not win any “Fight of the Year” award but is a purist’s dream.

DeGale, 29, won the British title inside two years as a pro in just his ninth fight. He lost to archrival George Groves in a grudge match one fight later. Since then, he’s won 10 straight, collecting the European title along the way. The London-born fighter is primed to challenge for his first world title after six years as a pro.

Dirrell, 31, is a 10-year pro. He got his world-title shot in 2009 when he dropped a razor-thin, split decision to Carl Froch in the opening round of Showtime’s “Super Six World Classic.” He rebounded to beat Arthur Abraham by disqualification five months later. He exited the tournament and has had long spells of inactivity — three wins in the second half of 2014 positioned him to fight for the IBF title.

Leon Margules of Warriors Boxing won the purse bid, offering $3.1 million, which will be split 50/50.

The purse isn’t the only thing split down the middle. Online gambling group bet365 couldn’t split either man, pricing both at 10/11 (-110).

Joe Gallagher, trainer of super middleweight brothers Paul and Callum Smith, among others

Andre Dirrell W 12 James DeGale: It’s the right time for DeGale but I feel the way to beat DeGale – and you look at the plan George Groves implemented that night – it was a close decision but we’ve got got someone that does that better than Groves in Dirrell. I think a “tip-top of his game” Dirrell comes in; I think it’ll be hard for James over there. James has adapted; he’s brought some strength to his work, switch-hitting. Dirrell probably hasn’t seen someone like “Chunky” before and how to deal with his style.

It’s very interesting. It’s a very hard, pick ’em fight. I just feel over in America – the other Dirrell brother [Anthony] lost and I’m sure [Andre]’ll be going out to make sure he doesn’t lose this time. It’s a real pick ’em but if I’m pushed, I think they may rob “Chunky” of the win on a points decision over there.

James DeGale SD 12 Andre Dirrell: I continue to go both ways on this fight, so the following is just an indication of how I’m feeling today.

DeGale is, by far, the more aggressive fighter but I don’t think that will work for him. He might try to swarm Dirrell with pressure early but his own inaccuracy, combined with sharp counters, is likely to slow that approach down.

I don’t think the styles will gel and the crowd won’t be impressed but I see DeGale claiming a split, perhaps controversial, decision after 12 ho-hum rounds.

Andre Dirrell SD 12 James DeGale: The temptation is to say that it ends in a draw. In terms of style, Dirrell and James DeGale might as well be twins. Both are left-handed. Both switch up. Both are slick. Both are tactical. Both are Olympic medalists.

Dirrell might have an edge in hand speed. DeGale appears to be punching with more power of late and there are questions about how Dirrell – badly hurt by Arthur Abraham five years ago – reacts if he gets tagged.

But the guess is Dirrell’s speed and tactical know-how will keep him out of harm’s way and be just enough for a narrow, controversial victory on the scorecards.

Andre Dirrell SD 12 James DeGale: Both these super middleweight contenders really want to win big in Boston and grab the vacant IBF championship that’s at stake there. Andre Dirrell wants it to maintain a world title belt in his fighting family. James DeGale is admittedly obsessed with the notion of becoming Britain’s first Olympic gold medalist to win a “genuine” world title as a professional prizefighter.

This is shaping up to be an intriguing confrontation on American soil. The fact that it’s being televised by NBC on the Saturday afternoon of Memorial Day Weekend should inspire both combatants to perform in excess of expectations.

DeGale won’t be easily defeated but he will be sent back to London with another loss on his record after “The Matrix” puts on the kind of breakout performance he’s been chasing since the disputed, 2009 split decision loss to Carl Froch in United Kingdom.

James DeGale W 12 Andre Dirrell: Style-wise, it will be an interesting match-up between two consummate technicians with decent power. But the “intangible” department is clearly in favor of DeGale. His motivation is to finally validate his Olympic achievement by winning a title abroad and join the illustrious list of terrific super middleweight champions produced by Great Britain since the dawn of the division. His frustrating loss to Carl Froch will spur him on even further and turn DeGale into a search-and-destroy battle-bot. A dominant victory by decision should be the most likely outcome and a late stoppage wouldn’t be surprising either.

James DeGale TKO Andre Dirrell: An excellent match-up, with two versatile southpaws who medaled in the Olympics squaring off for a world title. Since both men are nearly identical in terms of size and speed, it comes down to intangibles and that James DeGale has faced stiffer competition recently.

It has been five years since Andre Dirrell stepped in with a top-10 opponent and I do not believe the fight taking place in the USA matters since the crowd has no connection or rooting interest in Dirrell. The fight will be won in the first five rounds, in which DeGale will be faster to the punch and beat Dirrell with his feet as the American tries to find his rhythm and time the slightly-quicker DeGale.

From round six on, I see it an even duel but playing catch-up and pressing will hurt Dirrell, who runs into some big shots late trying to close the gap on the scorecards. DeGale has shown increased power of late and I am picking DeGale to score a TKO in the championship rounds.

James DeGale UD 12 Andre Dirrell: This should be a close title fight and one relatively worthy of the name. I am just giving it to the British man, who can make history by being the first boxer from this side of the Atlantic to win Olympic gold and then become a titleholder. DeGale seems more fired up than ever and that should mean a performance to match follows.

Andre Dirrell W 12 James DeGale: Dirrell versus DeGale is your proverbial 50/50 fight. Both fighters are tall southpaws who can punch. Dirrell has fought the tougher competition while DeGale is two years younger at 29.

Dirrell, an American, will also have the home field advantage over DeGale, of England. I want to go with DeGale but I have a feeling that the quicker Dirrell will edge DeGale over 12 tactical rounds.

James DeGale W 12 Andre Dirrell: This is a coin-flip fight but I think DeGale is a little mentally tougher. He’ll be more willing to make it a fight when he needs to and that will be enough in the second half. This is a spot where a highly-debated decision won’t be a surprise.

James DeGale W 12 Andre Dirrell: It’s an intriguing match-up. It’s a difficult fight for James; they both have similar styles, similar records, both southpaws, fast, tricky boxers. It could be a clash of styles. They’re both counterpunchers; one needs to take the lead. I’d like to think James DeGale wins.

James DeGale W 12 Andre Dirrell: I think it’s a very good fight. I think it’s one of the better match-ups in the super middleweight division. I rate the two of them, they’re both talented, Olympic medalists, both similar, both good skillful southpaws. They rely on reflexes and speed. It’s tough going over to America but I can see it being a good chess match, not a boring one, and I think DeGale will scrape home on points. It’ll be tough to score but I can think DeGale wins a close points decision.

James DeGale UD 12 Andre Dirrell: Andre Dirrell will be facing his biggest challenge, James DeGale, since 2010, when he was awarded a disqualification victory over Arthur Abraham.

From the beginning, DeGale has shown he craves challenges and aspires to become champion at 168. Dirrell has all the tools to dominate the 168-pound division. His immense talents and gifts speak for themselves.

However, DeGale seems to just want it more and I believe, from a technical standpoint, DeGale will take a close but clear, unanimous decision over Dirrell.