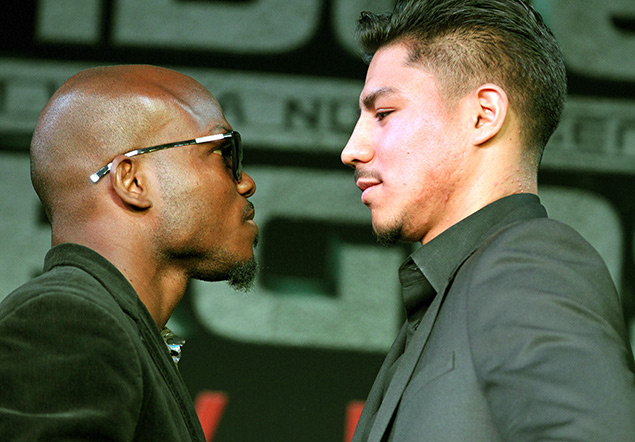 18
May
by Doug Fischer

Two-division titleholder and pound-for-pound rated Tim Bradley will face unbeaten junior welterweight contender Jessie Vargas in a scheduled 12-round welterweight bout on June 27 that will be televised live on HBO from the StubHub Center in Carson, California, promoter Top Rank announced at an L.A. press conference on Monday. The HBO World Championship Boxing broadcast will begin at 9:45 p.m. PT/ET.

“I’m excited to be back in the ring,” Bradley (31-1, 12 knockouts), who was winless in 2014 having dropped a unanimous decision to Manny Pacquiao last April and being held to a controversial draw by Diego Chaves in December, stated in a press release. “I look forward to the challenge and taking away his ‘0’ from him on June 27.”

Bradley, a 31-year-old Palm Springs, California resident, has faced the likes of Pacquiao, Juan Manuel Marquez, Lamont Peterson and Ruslan Provodnikov, who he battled to a Fight of the Year unanimous decision victory against in 2013.

“I am thrilled to have this fight,” Vargas (26-0, 9 KOs), a 26-year-old Las Vegas resident, stated in the press release. “I will be facing a very talented fighter and when you have two great talents with a lot of heart it always makes for a great fight. I always elevate my game against better competition. I am ready to show and prove that I am one of the best fighters out there. There is not one doubt in my mind that everyone will enjoy this fight. I look forward to giving the fans the best of Jessie Vargas on June 27. “

“The last time Timothy Bradley, Jr., entered the ring at the StubHub, he left having given the fans the fight of the year,” said Peter Nelson, Vice President of programming, HBO Sports. “Now, he returns for his 2015 debut against one of boxing’s undefeated rising attractions, Jessie Vargas, in a fight that augurs to have great action and impact in the loaded welterweight division.”