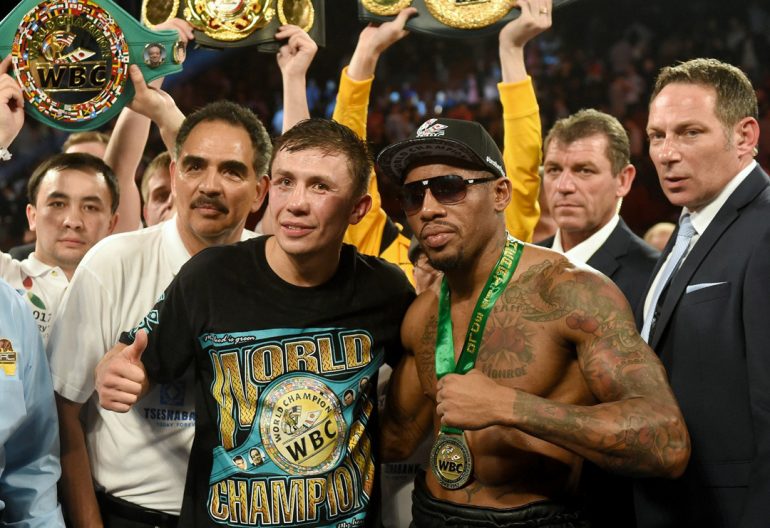 18
May
by Coyote Duran

As the rounds progressed on Saturday evening in Los Angeles and Willie Monroe Jr. showed an immense heart and desire to play things out, show the mettle of a champion, I Tweeted out that, no matter what, the kid’s stock would rise off his showing against WBA middleweight titleholder Gennady Golovkin.
All in all, I still believe that butÔÇª

Two elements of the showing by the now 19-2 (6 knockouts) hitter from upstate New York give me slight pause.

One, the fact that he was on his feet, eyes clear, legs not spaghettiedÔÇªand he told ref Jack Reiss he was all done.

Now, let’s get this out of the way right now. I’m not howling protest; I’m not even loudly barking itÔÇªbut I will admit that “No mas” I didn’t see coming.

We boxing fans are more progressive, collectively, than we were even 20 years ago. This information age has seen to that; too many of us know what “CTE” stands for. HoweverÔÇªlet’s put it out there. Even though it may be detrimental to one’s longer-term health, the willingness and ability for a boxer to go down shooting, guns a blazin’ to the last, is something that sets THEM apart from us, elevates them on the life pedestal, makes them closer to immortal. Monroe didn’t – and maybe he should not have – but is the full-on warrior tag applicable if a fighter doesn’t choose that route?

I processed my reaction to the capitulation with Abel Sanchez, the old-school tutor to the man who walloped Monroe, Gennady Golovkin. I didn’t see that no mas coming, AbelÔÇª

“Hard thumping like that makes you think,” he told me. “Vince Lombardi once said something like, “Fatigue makes cowards of men.'”

We both agreed that fewer fighters than in days of yore show a willingness to fight to the last, to “go out on their shield.”

Do we, as fans, expect “too much” if we want that mindset to play out in a boxing match?

“I think that is what they signed up for,” Sanchez replied. “It would be interesting to go back on his career and hear his criticisms of his opponent not giving their all.”

That willingness to not fold when the going has gotten exceedingly tough is a typical element of “the greats,” we both agreedÔÇª

More MonroeÔÇªThe fighter took to BoxingScene.com to opine that he doesn’t think Golovkin should be looking to secure a fight with Floyd Mayweather Jr.

“People need to stop trying to putting him up there with Floyd,” Monroe told Radio Rahim. “Floyd has been world champion for 19 years. Nothing against Triple G but he’s been over here three yearsÔÇªLet that man live; let that man have his titlesÔÇªThey said [Manny] Pacquiao would be [Mayweather’s] biggest challenge. He beat him, now they say Gennady. If he beats Gennady, they will go and find someone else. Let that man live; give that man his credit.”

Again, I didn’t see that coming. Did Sanchez? “I did not care for that either; you quit and then you are trying to dictate another’s career,” Sanchez said.

To reiterate, Golovkin has said he would drop down to a 154 pounds, a weight Floyd has fought at, to meet Mayweather. Floyd himself has been non-committal to that possible match-up but his acolytes are ready with ample reasons why he shouldn’t do it. Sanchez, who reveres the old-school values that many boxer-businessmen eschew these days, thinks that if Floyd wants to tout himself as “TBE” and the fans clamor for a Mayweather-Golovkin match-up, there exists no reason for Floyd to blow it off.

Talk to me, readers…What did you think of the way Monroe ended the evening? And what of Sanchez’s point that Monroe should butt out and not play manager to a man who just bettered him and carry water for those who say Golovkin is too big for “Money” to deal with?