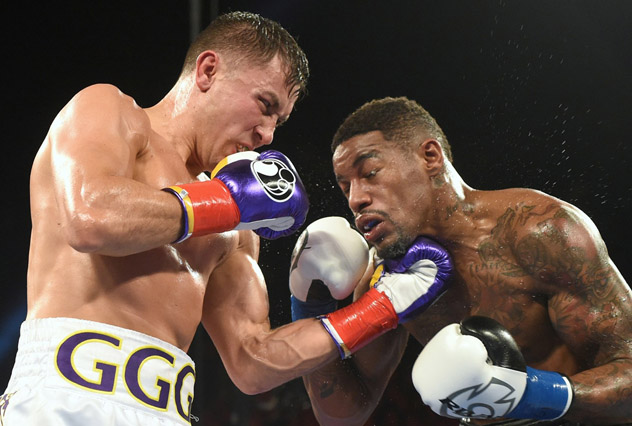 16
May
by Doug Fischer 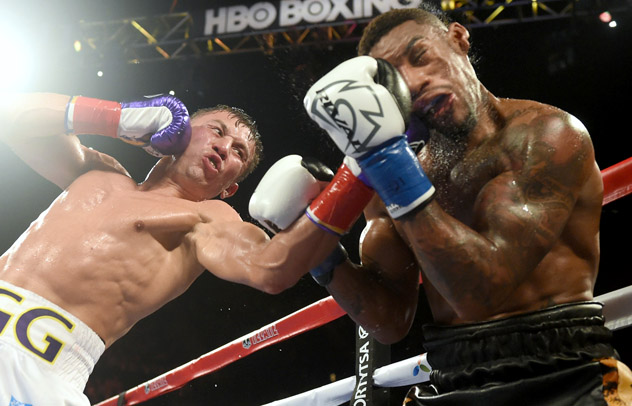 INGLEWOOD, California — Gennady Golovkin scored his 20th consecutive stoppage victory with a sixth-round technical knockout of the very game but out-gunned Willie Monroe Jr. on Saturday at The Forum. Golovkin, who defended his WBA title for the 13th time, scored two knockdowns in Round 2 and one in Round 6 before referee Jack Reiss stopped the bout.

Golovkin (33-0 30 knockouts) quickly cut the ring off on Monroe, a skilled and athletic southpaw, in the opening round, and midway through Round 2 a counter hook dropped the New Yorker. Monroe got up on shaky legs and tried to fire back but a series of hooks put him down again.

“We were both in motion and he got me with a good shot,” Monroe said of the first knockdown after the fight. “He was strong.”

Monroe (19-2, 6 KOs) knew he couldn’t survive with a stick-and-move game plan so he did something that helped the crowd favorite entertain the more-than 12,00 fans in attendance and hopefully helps his own marketability for future fights: he stood his ground and traded punches with arguably the hardest puncher in boxing.

In Rounds 3, 4 and 5, Golovkin and Monroe stood head to head and exchanged punches. Monroe was faster and busier. Golovkin launched the harder punches. The crowd loved every minute of it.

“I was thinking about my grandfather who started me in boxing,” Monroe said of the two-way action. “He was easy to hit but he takes a good shot.”

And, of course, he delivers a good shot. Monroe, who arguably could have won Rounds 3 and 4, was repeatedly buzzed in Round 5. A right uppercut landed at the start of Round 6 stiffened his legs and a series of crunching follow-up hooks that landed with a staggered Monroe along the ropes put the courageous challenger to the canvas for the third time. Monroe got up on unsteady legs, just 45 seconds into the round, and reportedly told Reiss that he was “done.”

Golovkin, even at the somewhat advanced age of 33, is just beginning. Monroe was his second fight of 2015, and he is scheduled go again in September and December. The Kazakhstan native, who now resides in Southern California (where he has trained for the past five years), hopes that pay-per-view level event is not too far in his future.

“I’m very happy with the Big Drama Show,” Golovkin said. “Willie’s a good fighter. I did not want an easy round or an easy fight. I want [Miguel] Cotto or Canelo [Alvarez] now. Not in the future. After that, Andre Ward can go.”