Edgar Sosa undaunted by Roman Gonzalez: ‘I have experience on my side’ 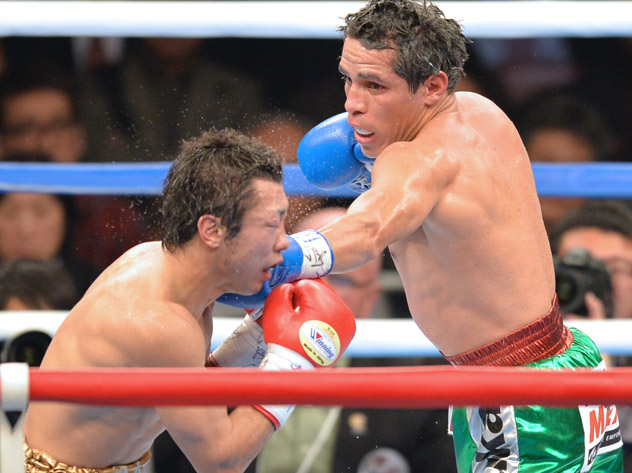 15
May
by Diego Morilla 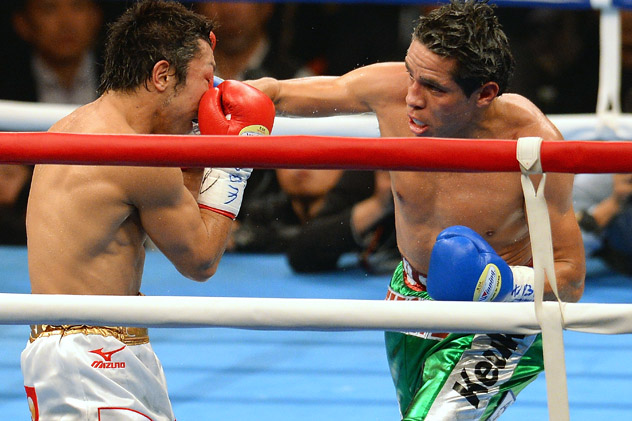 Edgar Sosa (R) fighting then-RING and WBC flyweight titleholder Akira Yaegashi on Dec. 6, 2013, in Tokyo. Sosa lost by unanimous decision and Yaegashi was knocked out two fights later by Roman Gonzalez, whom Sosa will face on May 16. Photo by Koki Nagahama/Getty Images.

The prospect of facing one of the world’s most talented fighters under the spotlight of HBO’s first flyweight co-main event in more than a decade would be enough to worry even the most seasoned ring veterans.

But former junior flyweight titlist Edgar Sosa (51-8, 30 knockouts) is confident that his experience as a champion will carry him through one of the most difficult challenges any fighter below 115 pounds could face nowadays.

“I don’t expect any setbacks. I have everything to gain and nothing to lose, I am motivated,” said Sosa a few days ahead of his fight against Roman “Chocolatito” Gonzalez (42-0, 36 knockouts) on the undercard of the Gennady Golovkin-Willie Monroe title fight at The Forum in Inglewood this coming Saturday.

The 35-year-old battle-hardened Sosa held the WBC 108-pound belt between 2007 and 2009 and had a great rate of success, defending his trinket 10 times before surrendering to Rodel Mayol in a foul-infested slugfest. He suffered a few horrendous injuries in that bout and its subsequent rematch, but he is confident that his many wars will come in handy when facing a gifted tactician like Gonzalez, who is THE RING champion at flyweight and rated No. 3 pound for pound.

“On paper, this is a complicated fight,” said Sosa, rated No. 4 at 112 pounds, during a recent interview with the WBC as part of their “Martes de Cafe” (Coffee on Tuesday) weekly pressers. “I had a great preparation and I am motivated. I have experience on my side. I feel good, with commitment to doing a great fight. I don’t think of anything else other than fighting a smart fight.”

Regardless of his high hopes, Sosa knows that he will be facing a masterful boxer in his best possible shape, but he also bets that Gonzalez will try to impress the huge mainstream audience by engaging Sosa in a close-quarters, mano-a-mano type of fight, where Sosa believes he will be able to turn the tide in his favor.

“We worked a lot on our leg mobility. With the left hand, we need to keep him at bay in the first few rounds, but always throwing punches as well,” said Sosa, stressing the need to build an early lead.

Against Gonzalez, a three-division titlist looking better and better in each new weight class he tries, Sosa will need much more than that to impress judges, press and an audience that has been abuzz in anticipation of a fight made just for the hardcore boxing fans. After the Mayweather-Pacquiao “disappointment,” many of those fans will turn their attention to this card expecting both headliners to score dramatic stoppages and continue their current KO streaks (currently at eight for Gonzalez and a bone-chilling 19 for Golovkin).

But even so, Sosa aims to repeat some of his most glorious performances, and he believes in a simple, yet proven recipe for success even in the face of what appear to be insurmountable odds against him.
“We have to fight intelligently, aggressively, work without pressure and come out to win,” said Sosa. “I feel focused on winning, demonstrating the level I am fighting at now”