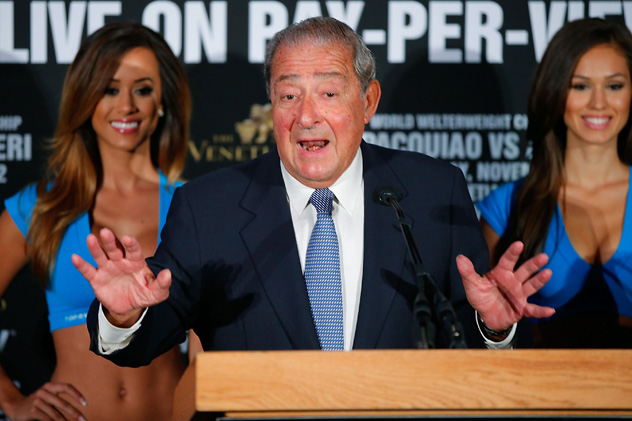 Bob Arum sounded downright happy. Who could blame the Hall of Fame promoter after just hearing the news that the May 2 Floyd Mayweather Jr.-Manny Pacquiao mega-fight established a new record for total pay-per-view buys with 4.4 million?

“Those are just preliminary numbers because that number will rise considerably,” Arum said. “I don’t know what was being projected going into the fight but everyone did a good job and it’s a splendid number and it has made history.

“That 4.4 will continue to rise in the months ahead. That’s the feedback we’re getting. It won’t exceed 5 million but I would say a good guess is that it will land around 4.8-million buys. That 4.4 million is a very conservative number. When the real numbers come out, it will really be mindboggling. It won’t go over 5 million. This whole event exceeded my expectations by far. I’m very, very happy with this number.”

Arum said indications during fight week, with the number of early buys, led Top Rank Promotions, Mayweather Promotions, Showtime and HBO, which all worked jointly in making the fight, would predict the buys would be greater than “any number that was ever reached before,” Arum said.

Mayweather-Pacquiao is now the highest-grossing PPV of all time, generating more than $400 million in domestic pay-per-view revenue alone, according to a press release from HBO Sports and Showtime, which worked in conjunction for the broadcast.

The release also stated that with additional revenue from the live gate at MGM Grand in Las Vegas, international television distribution, sponsorships, closed circuit and merchandise sales, the event is expected to generate in excess of $500 million in gross worldwide receipts.

Mayweather-Pacquiao nearly doubled the previous record of 2.48 million buys generated by the Mayweather-Oscar De La Hoya event in 2007 and nearly tripled the record $150 million in US pay-per-view revenue generated by Mayweather-Canelo Alvarez in 2013.

Live gate receipts for the star-studded event at the MGM Grand Garden Arena produced more than $71 million in revenue, dramatically eclipsing the previous live gate record of $20 million (for Mayweather vs. Canelo) for both the sport of boxing and Las Vegas.

Additionally, Mayweather vs. Pacquiao set the record for closed circuit admissions and revenue both in Las Vegas and at establishments nationwide. The event sold nearly 46,000 closed circuit admissions at MGM Resorts International properties in Las Vegas alone and was available at more than 5,000 bars, restaurants and commercial establishments throughout the United States.