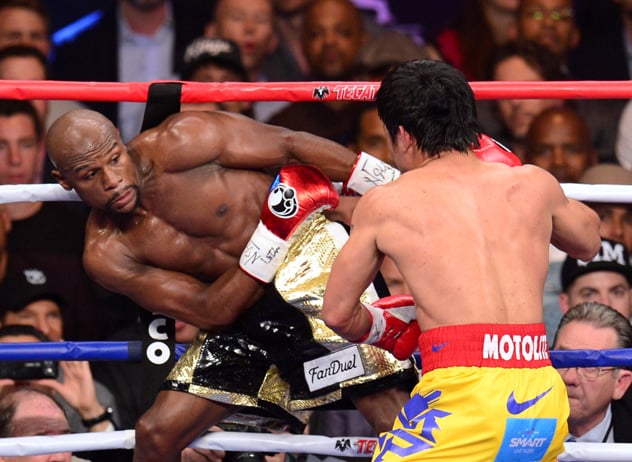 11
May
by Doug Fischer 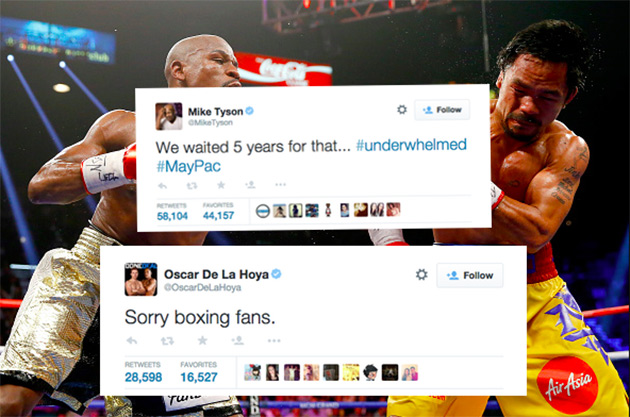 In the early morning hours of Sunday, May 3, the waitresses of a popular Philadelphia center city sports bar were still dealing with the deluge. Strewn over the dark oak tables of the dimly lit place were plastic utensils rolled up in stained paper plates, and balled-up napkins stuffed in cups.

Sal D’Antonio, the restaurant manager, was pleased. It was a great night – as it was in almost every sports bar in the city, and probably across the country due to a very special boxing match – the much-anticipated Floyd Mayweather Jr.-Manny Pacquiao mega-fight in Las Vegas on Saturday, May 2.

Yet there was Sal lamenting the sentiments of many patrons who came through his doors that night.

“I can’t tell you how many times I heard people, many who never paid to see boxing before, leaving shaking their heads wondering what they paid $25 to see,” said Sal, who agreed to talk to Ring TV.com as long as his establishment’s name wasn’t used. “It was good for businesses, definitely the fighters, the promoters, anyone involved, but it was bad for a majority of the audience. I can tell you from what I heard, there’s a lot of people who will never pay to see a Floyd Mayweather fight again.

“Some people even asked if they could get their money back, and I think I saw some guy fall asleep in the back – and he wasn’t even drunk. We’ll never buy another Floyd Mayweather fight, because it wouldn’t be worth it.”

Mayweather-Pacquiao will no doubt generate record-breaking pay-per-view numbers, many projecting that figure to be over the 4-million mark, possibly over 5 million.

But will the masses pay to see Mayweather in record numbers again? Will sports fans across the country clamor to see a rematch, or go out of their way to purchase a Mayweather fight?

A small sampling of sports fans the days following Mayweather-Pacquiao lean toward an empathic no!

“The jockeys hit their horses at the Kentucky Derby more than Mayweather and Pacquiao hit each other,” said renowned New York Daily News sports columnist Mike Lupica. “Do you think anyone would want to see either of those two fight again? Face it, boxing had a chance to hold the spotlight and shine and it didn’t. It was impossible for this fight to live up to its hype. Boxing fans had an idea what they were getting with Mayweather, but do you really think anyone who was watching boxing for the first time would want to see Mayweather fight again?”

Theresa Boyd, from North Philadelphia, had heard about Mayweather and how talented he was supposed to be. The 30-something nurse had gone with a group of friends to see for herself. She came away thoroughly disappointed. She had heard her father raving about the wars he watched, those transcendent, epic battles between Marvin Hagler and Tommy Hearns, between Sugar Ray Leonard and Roberto Duran, and Leonard and Hearns.

“I YouTubed Hagler-Hearns and just ‘Wow!’ what a great fight, and I was really fooled I would see something close to that, even though people warned me about Mayweather, they also told me and my friends Pacquiao would make Mayweather fight,” Boyd said. “All they did was dance, in my opinion. That was the first time – and probably the last time – I’ll pay to see Mayweather fight. The guy does nothing for me.”

Larry Merchant, the Hall of Fame journalist/broadcaster, predicted what would happen before it did. His wisdom resonates still when it comes to Mayweather and his allure to sports fans.

“It was a great promotion for mixed martial arts,” Merchant said, laughing. “Here’s the interesting part, you have the Cuban boxer, Guillermo Rigondeaux, who’s been virtually banned from TV with the kind of style that I call controlled nonviolence, and you have Mayweather becoming the biggest star in the sport, and a moneymaker, with not the same style, but with the same philosophy. Mayweather is a great fighter, who achieved everything he wanted to achieve by being so smart in promoting himself. But seldom, if ever, does a fighter with his style become a big box-office attraction.

“I would say Mayweather-Pacquiao was an opportunity missed for boxing, in the sense that the stars were aligned in such a way that the fight became a supernova, popular culture event that transcended the sport. It brought a lot of people in to see it, and then the event became an event instead of a fight. It was anti-climactic. I’d like to say that boxing is a sport, but it’s also part of show business and entertainment and the first rule is don’t bore people. And this fight was boring, relative to anyone calling it, ‘The Fight of the Century.’

“Happily, we’re still early in the century, so we’re going to get something better. Very often, when a fight achieves a critical mass like this, it’s usually because the fighters have earned their star power by having performed. Leonard-Duran, Hagler-Hearns did, though often it doesn’t always live up to expectations. The money generated from this fight in that sense, it was a win, but it was not a win-win. It’s like inviting people to a big party that turns out to be a dud. You want to invite people to a party where they want to come back. Why would a casual fan be seduced or suckered into another one of those?”

Merchant broached the fact that Mayweather was once a highly aesthetically pleasing fighter to watch when he was a junior lightweight. He boxed and banged then. He was decisive. Maybe it’s why Mayweather has only been THE RING’s Fighter of the Year twice in his illustrious career, in 2007, when he beat Oscar De La Hoya and stopped Ricky Hatton in the 10th round. Before that, you have to go back 17 years, to 1998, when Mayweather was last selected THE RING’s Fighter of the Year – perhaps Mayweather’s most action-packed as a pro. It was Mayweather’s star-turning year, stopping the late, great Genaro Hernandez in eight, to win his first major belt, the WBC’s 130-pound title. Then “Money” (then nicknamed “The Pretty Boy”) closed the year by demolishing Angel Manfredy to defend the title.

That vintage, fan-friendly version of Mayweather seems like a completely different fighter than he’s evolved into today.

You won’t find two bigger advocates for boxing than Merchant and Max Kellerman, the HBO color analyst who was part of the joint Showtime-HBO broadcast team that brought the record-breaking fight to the pay-per-view masses.

Like Merchant, Kellerman understands the crossover fans universal disapproval of the fight.

“It was high-level boxing, especially by Mayweather, and you have to give it to Pacquiao, as the smaller guy who really had to be on his A-game to get the decision, but Pacquiao hardly landed anything, and neither did Mayweather,” Kellerman said. “Because Pacquiao didn’t press the issue, the way he could have pressed the issue, it wasn’t as high level as it could have been. If Pacquiao would have been more aggressive, it would have been a better fight.

“Floyd Mayweather and Manny Pacquiao still have few of the recognizable brands in boxing, and two of the more recognizable brands in sports, period. Since they’re at the place where they only have to fight once a year, they’ll make a mint whenever they fight. What’s next for them is Pacquiao will have surgery, Floyd will fight someone he’ll beat in September. Floyd will retire, demur and say he doesn’t want to fight Pacquiao again, and Pacquiao didn’t show any class the first time. But that will just build up more demand for a rematch. The narrative of Pacquiao’s bad right shoulder will start to take hold, especially with Pacquiao’s fans still in denial over the first fight. And they’ll do it again.

“They won’t do the kind of numbers they did for this fight. If Mayweather makes only $100-million, and Pacquiao only makes $80-million, it will still be a bonanza. The first-time fans who ordered the fight, I’ll concede, they won’t buy the rematch. But we’re boxing fans. We can’t help ourselves. We always come back. We’re going to pay our money, watch, and then complain. Maybe they don’t get 4-million buys, but 800,000 – and that’s still enough to make a lot of money.”