Bernard Hopkins: ‘The chance of Carl Froch beating me is slim to none’ 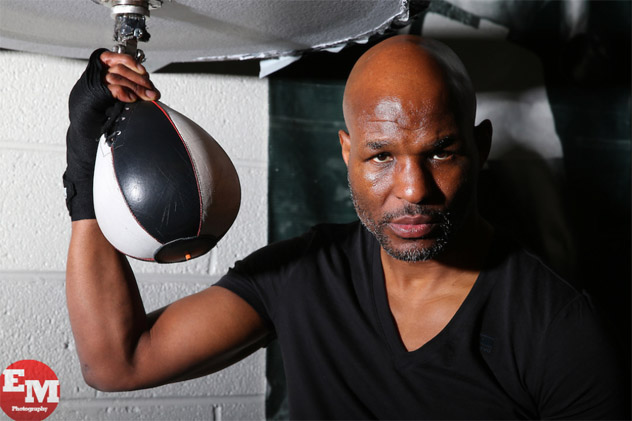 It’s been six months since Bernard Hopkins lost his light heavyweight title unification bout to Sergey Kovalev. The loss hasn’t dampened the 50-year-old’s enthusiasm toward the sport, however.

“I’m going to make a decision by June,” Hopkins told RingTV.com last Thursday at the Canelo Alvarez-James Kirkland press conference. “I do have an option with HBO and they want to do a fight depending on who it is and where.
“I just haven’t given them the go yet. I will do one going-away fight on a high level or I won’t do it at all, which means I have to be in a position to do something respectful, not only to my legacy and to boxing fans and for TV. Nothing has been worked up on hard and aggressive yet. We still have time.”
However, the Philadelphia fighter says this is definitely his last year as a professional boxer. “I’m still an active fighter but I won’t be after this year; that’s for sure.” he said.
He still works out every single day though admits some days are less strenuous than others.
Regarding his options for possible opponents before bringing the curtain down on his Hall of Fame career, of course, Hopkins has a plan.
“[I’m looking to fight] at 168; I want to be a three-weight world champion. I jumped over 168 and never went back down. Right now, I’m weighing 174¾. I feel good.
“I would like to fight [Carl] Froch. He brings a fan base like I bring and I think I have a fan base on both sides of the world.” [Editor’s note: Froch was recently stripped of his WBA title for inactivity. According to those close to Froch’s camp, his plans for the near future are unknown.]

The former undisputed middleweight champion’s eyes light up at the mere mention of fighting in England on a stage similar to when Froch fought George Groves in a rematch last year.

“I’ll accommodate him if he’s serious, if he’s not afraid to get beat by a 50-year-old,” he said with a chuckle. “That fight has the respect from most media who won’t talk down on this fight; I’m pretty sure they won’t. I’ll do it over in his country or over here; he says he wants to fight in Las Vegas, that’s the beauty of this thing. I try to make it where nobody has a way out.

“I don’t know if it’s true but [Froch] said he has no interest; he’s in a lose/lose situation. That’s a way of saying, ‘I don’t want none of that problem.’ If that’s how he feels, smart move. I’m not going to argue that because nobody else is going to believe why, based on age. He’s not Sergey [Kovalev]. He’s not tall. He’s not big. He’s not unorthodox; the chance of him doing that [beating Hopkins] is slim to none.”

Hopkins isn’t interested in fighting the other top super middleweight in the world, Andre Ward, who returns June 20. The two have a long-standing relationship and have known each other for many years. Ward is something of a prot├®g├® of Hopkins.

Away from his boxing career, Hopkins is a partner in Golden Boy Promotions. The company lost many of its big names earlier this year when it severed links with Al Haymon and is now in a state of rebuilding.

“With Golden Boy, we’re building young talent to be superstars,” he explained. “Canelo is on the door, waiting to be branded, like a sheriff with a badge. Once the first two or three fighters move out the way, he builds his legacy from that. Next year is going to be very exciting for a lot of people. I believe Golden Boy, we’re in a stabilizing situation; you build from what you have. When you have that, HBO and other outlets want to do fights that are competitive and no-miss matches.”

The self-proclaimed “Alien” was quick to say that he has many options outside of fighting, including commentating.

“I have so many great offers; so many people want to hear my input on fights,” he said. “They say, ‘He studies broadcasting like he trains for a fight.’ I say everything I do, I do with the concept of exercising my body, exercise my mind, eat the right food, look good in my clothes and research. That is a TV executives dream.”


Hopkins arrived in Houston after spending a week in Las Vegas where he worked the Floyd Mayweather Jr.-Manny Pacquiao fight. He had some strong words for Pacquiao.

“Floyd did what I would have done, disarm him, reduce him down to average and take the wind out of his sails.

“We should all be in uproar about what Pacquiao said to the world and fans. Fans are in rehab; they had a rough Saturday, Canelo-Kirkland is their rehab.

“You can’t take away from what a man’s been doing all the time. You didn’t see anything different [from Mayweather]. Why would I take a risk now like that and not show my skills to fight his style? The burden was not [on] Floyd; Pacquiao had the high burden to do the things he said he was going to do and everybody else said he was going to do – at least on his side – to Mayweather. So the burden was on his side and Pacquiao told you the reason he couldn’t fulfill that burden was because he had a shoulder injury a month ago but he told you that after you paid him.”