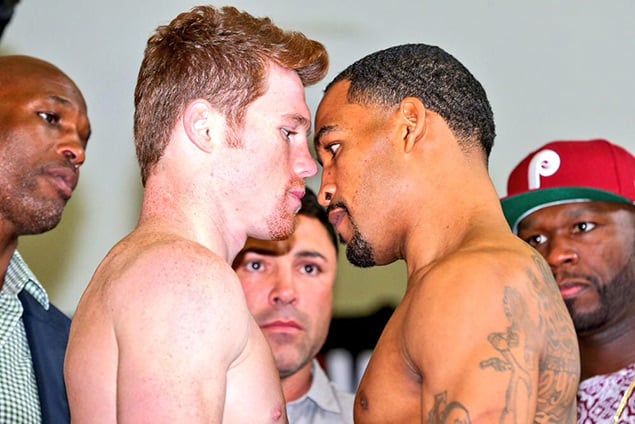 Tonight Canelo Alvarez and James Kirkland meet in a 155-pound catchweight at Minute Maid Park, Houston, Texas. The anticipated fight will be televised live on HBO at 9:00 p.m. ET/PT.

The bout pits the exciting star-power and skills of Canelo vs. the outright aggression of Kirkland. Kirkland is known as a slow starter but once he warms up is usually hell for anyone. On the flip side, it has been suggested that Canelo struggles down the home stretch. Alvarez, still only 24, he enters this fight on the back of a 10-month absence. He was due to face Joshua Clottey last December before injury curtailed that fight.

Canelo (44-1-1, 31 knockouts) has won both his fights since losing his unbeaten record in May 2013, beating up Alfredo Angulo before winning a razor thin split decision against Erislandy Lara last time out. Kirkland, will end a 17-month hiatus from boxing when he faces Alvarez. Last time out the pressure fighter beat down on Glen Tapia, scoring an impressive sixth round stoppage win. He’s no longer working with Ann Wolfe, credited with much of his success, however, he believes his new team will help him to victory just the same.

Canelo Alvarez KO James Kirkland: A tough-ass war for five, six rounds then I think Kirkland probably runs out of gas. Canelo get the stoppage.

Canelo Alvarez KO James Kirkland: I think that Kirkland going to jump on him early, but Canelo is to fast to the punch, to sharp, to strong, to young, to healthy, every advantage. I think he eats him alive in the second or third round.

Canelo Alvarez PTS 12 James Kirkland: This is a tough pick for me. Because James Kirkland is so inactive and he always seems to have out of the ring distractions. But his biggest strength is Canelo’s biggest weakness, stamina. Canelo is not a lights-out puncher to me either. He doesn’t hurt or drop the top level 154 pounders he faces. So I say Canelo by controversial decision

Canelo Alvarez TKO3 James Kirkland: Without provocative trainer Ann Wolfe in his corner, the odds are long indeed of James Kirkland pulling off a “Mercer KO Morrison” type victory at the expense of Canelo Alvarez. Even at his power-punching best, Kirkland is a chinny brawler with costly balance issues. Hit him on the button just right and Kirkland falls right down. Unfortunately for him, Alvarez is an accurate boxer with power to spare and that’s what the Mexican heartthrob will bring to bear on the “Mandingo Warrior” in a wild shootout that promises to be fun while it lasts.

Canelo Alvarez TKO 10 James Kirkland: Which James Kirkland will show up? Impossible to say, yet the answer figures to determine this one. Kirkland has been MIA for more than a year. Trainer Ann Wolfe is gone. Inactivity and a change in his corner are a dangerous combo of potential uncertainty, which should create an opening for the stubborn and confident Canelo.

Canelo, who has never had any doubt about who he is, will walk through it with his effective combinations for a late stoppage.

Canelo Alvarez TKO5 James Kirkland: My pick is based on two main factors which are both boring and obvious to anyone who knows the facts.

Firstly, Canelo Alvarez is superior to James Kirkland in almost every facet of the game and secondly, for Kirkland to have had a chance, he needed fierce disciplinarian Ann Wolfe in his corner. She isn’t. Rumors abound that Kirkland entered camp way out of condition and I fear the worst for him here.

If Canelo prevails before five I wouldn’t be in the least bit surprised because Kirkland’s erratic behavior and long periods of inactivity are surely going to decisive.

I expect high contact action, both ways, until Canelo lowers the boom.

Canelo Alvarez TKO 10 James Kirkland: If Canelo doesn’t get Kirkland early – a definite possibility given his history of slow starts – Alvarez’s accuracy and superior talent will gradually wear down Kirkland, who, without Ann Wolfe in the corner, won’t be at his peak of condition. Canelo tends to take his time and after absorbing the initial rush he’ll settle down and pick Kirkland apart.

Canelo Alvarez TKO 7 James Kirkland: James Kirkland beating Canelo without Ann Wolfe is downright laughable. Without the lauded trainer, Kirkland has shown both a lack of conditioning and discipline. Kirkland will come out like gang busters for the first couple of rounds and end up fatigued before the middle rounds are underway. As long as Canelo can weather that opening storm, he’ll have no problem dissecting Kirkland before cranking up the pressure to get a mid to late stoppage.

Canelo Alvarez KO James Kirkland: I think Kirkland is tailor-made and was picked by design for Canelo. Stylewise I see Canelo stopping Kirkland. I do say this about Kirkland he has a warriors chance and a punchers chance. I think it’s pretty much out there that his [Kirkland’s] chin aint the best in the world. The old saying boxing is the arena of the unexpected, anything can happen. I see it as Canelo having a pretty easy fight and stopping him in the early to mid rounds.

Canelo Alvarez KO James Kirkland: It’s going to be a great fight, they have similar styles, they’re both going to punch but it’s an advantage to Canelo. I feel Canelo is going to win. By about the sixth round I feel it’s going to be a knockout or they’re going to stop it.

Canelo Alvarez PTS 12 James Kirkland: A tough, close fight between two fighters who won’t have to go out looking for each other in the ring. Both Alvarez and Kirkland are always willing to mix it up in the center of the ring, and this will be no exception. But those who believe Kirkland has the power to stop Alvarez are grossly misjudging Canelo’s ability to take a punch. In the end, I believe Canelo will land at a higher rate to cement a wide decision in his favor after an old fashioned, toe-to-toe war.

Canelo Alvarez KO James Kirkland: Psychically these two are mirror images of each other, and their styles are complimentary which should make for a good back and forth fight in the first three to five rounds. The intangibles favor Canelo, such as Kirkland’s lack of activity and questionable mindset, and he can count on the crowd to inspire him to rally past or finish Kirkland at key moments. In a clash of punchers the chin is often the deciding factor, here again Alvarez has the advantage and better overall defense to boot. The only way I see Kirkland winning is an early onslaught that catches Canelo cold, otherwise Alvarez takes over from the fourth round on and slowly grinds Kirkland down for a late round stoppage.

Canelo Alvarez TKO 6 James Kirkland: The last time Canelo Alvarez was seen in a boxing ring was when he faced the very clever Erislandy Lara. Alvarez chased Lara for 12 rounds–winning the fight by a split decision.

James Kirkland, who faces Alvarez on May 9, is no Erislandy Lara. Kirkland’s game is all about power. He stalks his prey and unloads wicked shots. Alvarez can punch too. His left hook is extremely dangerous. He’s also the better defensive fighter. I see a short but exciting contest, with Alvarez winning by a sixth round stoppage.

Canelo Alvarez KO James Kirkland: This will probably be fun, quick and violent. Canelo is on a different level than Kirkland. With Ann Wolfe in Kirkland’s corner, anything can happen but without her, Kirkland is a sitting duck. He will still try to win, of course, and maybe he’ll buzz Canelo a few times but eventually Alvarez will begin landing to the body and that shaky chin and once that happens it will only be a matter of time before Kirkland breaks down. Canelo in six.

Canelo Alvarez KO James Kirkland: Both men can hurt each other. Alvarez is the better boxer with the better beard. Anything can happen but this is a pretty easy pick going in.

Canelo Alvarez KO 7 James Kirkland: This fight will be fun to watch but there is a gap between the fighters in terms of their all-around ability. Kirkland has remarkable energy and punching power — which gives him a chance in any fight — but he doesn’t have as many tools as Alvarez has. I think Canelo will outbox an attacking Kirkland, wear him down with sharp, punishing punches and ultimately knock him out. Alvarez KO 7.

Canelo Alvarez James Kirkland: I think Canelo is going to outbox him and maybe stop him late. I think the fact that Kirkland didn’t train with Anne Wolfe, I don’t think he’ll be in the shape he’s used to. Canelo is the better boxer, he’ll be real cautious with Kirkland because Kirkland can punch.

Canelo Alvarez PTS 12 James Kirkland: I think it’s gonna be a good fight, I think the only way Kirkland wins is if he comes out and make Canelo fight early because Canelo’s gonna be struggling late at the end. I know he’s gonna be in great shape. he can’t get beat up in the process, he has to put the pressure on Canelo and make him fight and then just at the end bring it, that’s the only way I see him winning.

Questions and/or comments can be sent to Anson at [email protected] and you can follow him at www.twitter.com/ AnsonWainwright