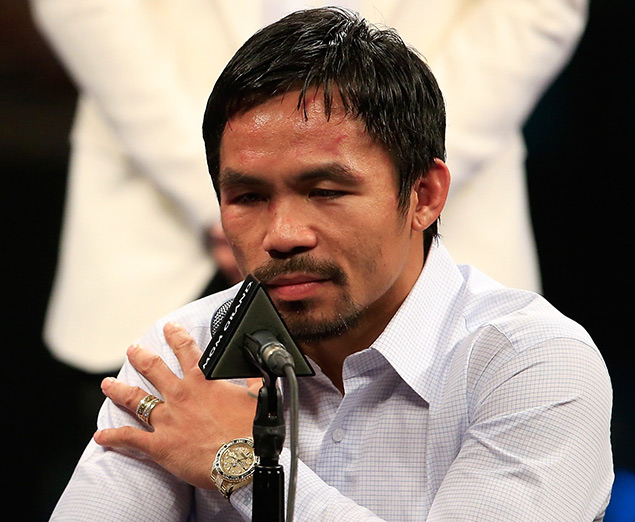 07
May
by Doug Fischer

Manny Pacquiao underwent surgery to repair a torn rotator cuff on Wednesday, in Los Angeles, and word is that the procedure went to form, and the pride of the Philippines is on his way to full recovery.

That right wing, his shoulder actually, was hurt about a month before his mega-fight against Floyd Mayweather. Postponing the super-fight was considered by Team Pacman, but a warrior instinct kicked in, and after consulting with docs, Pacman and company decided to forge ahead. The shoulder, and that torn rotator cuff, didn’t cooperate after the third or fourth round, and lord knows, fighting the defensive genius Mayeather with two good arms is hard enough.

The boxer and his crew have drawn scorn in some circles for not pulling out, though promoter Bob Arum has been noting that athletes in most all contact sports enter contests sub 100%, and this case was no different. Pacquiao expected to be able to compete after receiving a pain killing/anti-inflammatory shot, but the Nevada commission nixed that idea on fight night, so he went in against “Money” without, his team says, his body being fully functional. Post-fight, Mayweather told media that he too enters fights with his body busted up, his hands being iffy for instance. Yet he finds a way to win, he pointed out. Twitter has been abuzz with some folks positing that Pacman should have kept quiet about the injury, and accepted the defeat without explanation.

The surgeon who did the cutting and sewing for the 90 minute outpatient surgery is Dr. Neal ElAttrache. The doctor said Manny could be back in a ring to fight within nine months to a year. “I could not be more pleased with the results,” the physician said.

Talk of a rematch with Mayweather has been batted about, maybe too early for some who thought the two men didn’t mesh all that well, style-wise, on May 2.

During fight week, promoter Arum told me he could foresee Manny hanging up the gloves in 2016, after doing one final bout, in the Philippines, against young gun Terence Crawford. A free show, in a stadium, would be a blast, said Arum. Also, he’s thinking the event could run on HBO, not pay per view. But obviously, that theoretical was thrown out there before the super fight unfolded, so we shall have plenty of time to debate the merits of the rematch, while Pacman heals up, and then, presumably, rounds into form. The fighter turns 37 on Dec. 17; he is 3-3 in his last six bouts, so the end could be near, and the era of Pacmania seems to be drawing to a close.