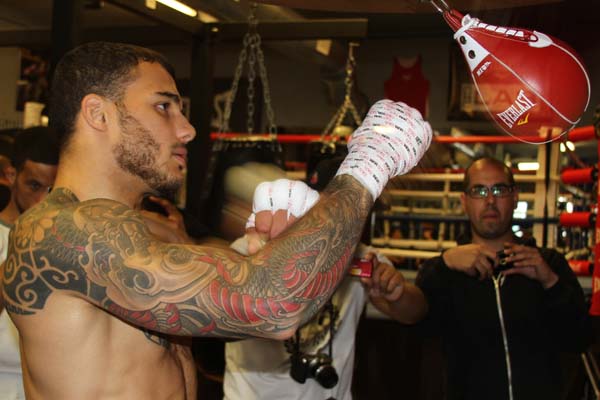 It is easy to write a fighter off after a bad loss. That was the case for Glen Tapia. Going into his Dec. 2013 bout against hard-hitting James Kirkland, Tapia held his ground but was eventually stopped in the sixth round.

The brutal punches Tapia absorbed during the fight far surpassed the opposition he had faced and dominated up to that point. Some in boxing were convinced the 25-year-old would never be a legit contender and that he may have hit his ceiling.

Tapia heard it all. While he may have agreed with some of the criticism, he didn’t have to fully accept it. A new trainer and new outlook are what “Jersey Boy” believes will lead him toward a world title shot and the respect he deserves.

Tapia will face Michel Soro on Friday night in a 10-round bout at the Prudential Center in Newark, NJ. The bout will headline a “MetroPCS Friday Night Knockout” card and will be broadcast live on truTV, beginning at 10 p.m. ET/7 p.m. PT.

After the loss to Kirkland, Tapia (23-1, 15 knockouts) took some time off but returned to the gym and eventually began working with trainer Freddie Roach. He has won his last three bouts in a row, including an impressive, third round technical knockout over Daniel Dawson on March 7.

“He’s an experienced guy,” Tapia told RingTV.com over the phone earlier this week. “In the fight he lost [against Zaurbek Baysangurov in May 2012], I felt [Soro] could’ve won the fight. He waits to counter you. He fights the same from the first bell to the end. It should be a great fight.”

Tapia credits a lot of his recent success to working with Roach. Tapia packed his bags, leaving the comfort of his hometown of Passaic, NJ., and traveled to Los Angeles to work out at the Wild Card Boxing Club in Hollywood, Calif.

There, Roach enlightened him on sport. The Wild Card is also where Tapia received top-notch sparring against some of the better fighters in boxing today.

Not only did he benefit from working out six days a week at Wild Card but it also allowed him take a look at the sport through a psychological perspective.

“It helped motivate me and it made me understand more about myself,” said Tapia, who fights under the Top Rank Promotions banner. “Freddie saw my potential. I’m not a brawler but I have skills. He woke me up to where my work ethic has to be at another level.

“I realized that until the Kirkland fight, I was coasting. I thought that the fights I was winning was a way towards becoming a world champion. But when he knocked me out, it woke me up. That fight, and what Freddie has taught, told me I had to be smarter and to be more motivated.”

There is no question Tapia has demonstrated a new commitment to his craft but the results speak for themselves.

However, there are still the critics to whom he has to answer. While some fighters may not pay much attention to what is written in articles or blogs, Tapia is different. He still remembers some of the criticisms, some merited while he felt others weren’t.

He has found a home at junior middleweight and is not moving up anytime soon, especially if there is an opportunity for a world title.

“I feel very comfortable at 154 pounds. I’m tall for this weight class.

“I have a lot of heart and I’ve been in tough. I’ve fought with a broken jaw [in a six-round, unanimous decision over Quinton Whitaker in Oct. 2010]. Personally, I know I’ve fought too much with my heart but I can still entertain and box.

“People have said I’m done and critics have every right to say that. I’m here to prove them wrong.”