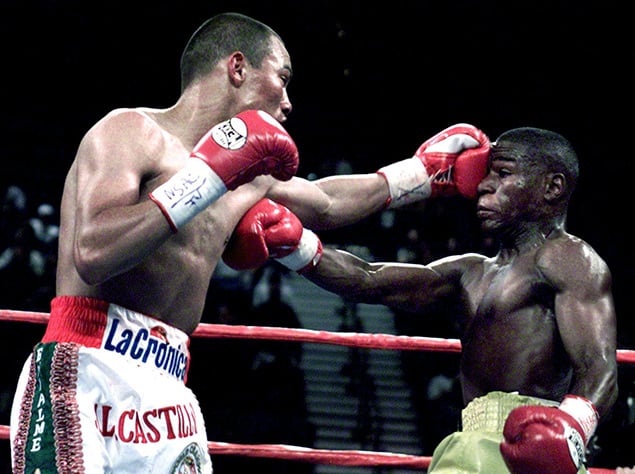 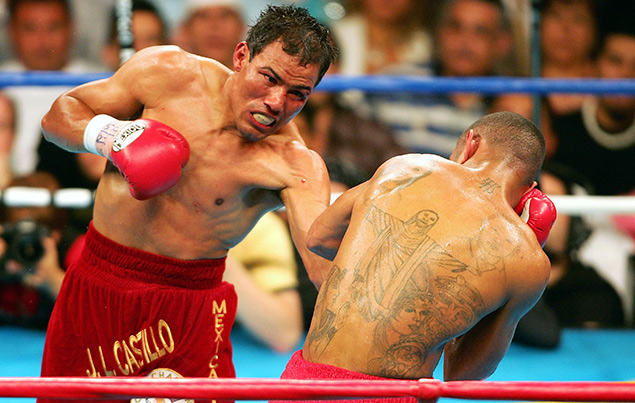 It has been 10 years since Jose Luis Castillo battled Diego Corrales in their classic first encounter. The lightweight beltholders waged war, fighting each other to a standstill for 10 brutally frenetic rounds before the most dramatic of conclusions to a bout that is considered one of the greatest of all time.

Both Castillo and Corrales had aggressive boxing styles, were big for lightweights and known to have fight-ending power, so the fight was well received by the fight public. However, nobody knew just how well.

From the very beginning each went at the other. As the rounds passed the action ramped up to another level, and after a fantastic ninth innings, the legendary 10th took place. Midway through Round 10, Castillo broke through, dropping Corrales with a left hook in the center of the ring. The game Californian rose on unsteady legs as the end looked imminent. A second knockdown took place, this time “Chico” spat his gumshield out to buy precious time. Referee Tony Weeks took a point from Corrales but let the fight continue. Then, out of nowhere, Corrales landed a monster left hand that visibly moved Castillo towards the ropes.

He followed with a combination that had Castillo out on his feet, head rocked backwards, eyes rolling to the back of his head, forcing the referee jumped in to halt the bout. It was a fight ending akin to a real life Rocky movie.

Looking back on the fight, Castillo isn’t bitter. He’s proud to have been involved in a historic fight. “I made it an attractive fight and exciting fight with Corrales to please the people,” Castillo told RingTV.com through translator Abraham Darwish. “After that fight I was still satisfied even though I lost because I won a lot of fans after that fight.”

Promoter Bob Arum CEO of Top Rank, who has been around boxing since the 1960s, ranked it among the top three fights he’s seen along with the Muhammad Ali-Joe Frazier rubber match and Marvin Hagler-Thomas Hearns.

“People understand this is something special,” the hall of fame promoter said. “Books will be written about this one.”

The two met five months later, this time each struggled mercilessly to make the 135-pound limit, Corrales just made it but Castillo was two pounds over. He never made the weight. This time, Castillo exacted a measure of revenge stopping Corrales in four rounds. Neither fighter was ever to really the same following that brutal, fight of the ages in May 2005.

Castillo now 41, continues to fight, losing his most recent fight against Ruslan Provodnikov last November. Corrales tragically passed away in a motorbike accident two years to the day removed from the first meeting with Castillo.

Early in his career Castillo worked with his legendary countryman Julio Cesar Chavez Sr., learning how important it is to work hard. He says nobody worked harder than the Lion of Culiacan. That experience cleared served him well.

As Castillo made his way through the tough Mexican scene he lost on four occasions when he challenged for the national title. Undeterred, he continued his progress when in September 2000, as a rank outsider, he surprised Steve Johnston winning ta majority decision to claim the WBC 135-pound title. The victory earned him THE RING magazine ‘Upset of the Year’ award.

He went on to retain the title three times, including a draw with Johnston in the former champion’s hometown.

In April 2002, Castillo looked to defend his title against Floyd Mayweather Jr., who had risen to lightweight from junior lightweight. Many believed at the end of 12 rounds that Castillo had done enough to beat the unbeaten rising star. However, the judges all voted for Mayweather. The rematch took place eight months later, this time Mayweather had the better of things winning a clear decision.

The Mexicali native says his proudest moment was winning the world title and that his best win was when he regained his WBC lightweight title against Juan Lazcano on the undercard of Oscar De La Hoya-Felix Sturm in June 2004.

“During the press conference, he was talking a lot of s__tÔÇªand I really developed a hate feeling toward him and wanted to hurt him,” reminisced Castillo. “But Lazcano turned out to be a lot tougher than I expected. To win the fight and to become world champion was quite satisfying.”

Castillo would lose to Ricky Hatton at junior welterweight in the summer of 2007 in what is viewed as his last significant fight at the top level. Castillo (66-13-1, 57 knockouts) graciously agreed to speak with RingTV.com about the best fighters he fought during his 80-fight career that has spanned 25 years. 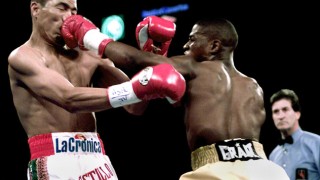 Mayweather: Floyd again, his jab was long and it was fast.

Mayweather: I couldn’t hit Floyd cleanÔÇª so he had the best defense also.

Mayweather: Floyd Mayweather Jr. had the best chin because I couldn’t hit him.

Mayweather: Because he moved a lot during his fight with me… and really couldn’t set to punch away.

Mayweather: Because he changed his style when he needed too.

Lazcano: Juan Lazcano was the toughest fighter I ever faced. He was just a strong fighter.

Mayweather: Floyd is best overall. For all the attributes I just mentioned.