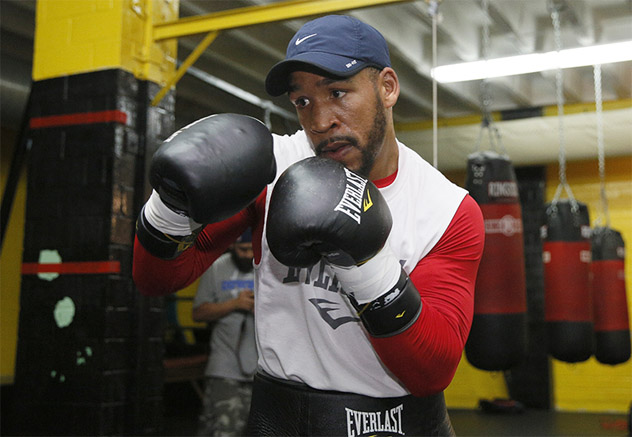 James Kirkland faces Canelo Alvarez on Saturday in a bout that takes places one pound above the junior middleweight division limit. The HBO telecast from Minute Maid Park in Houston, Texas begins at 9:00 p.m. ET/PT.

It marks the first time in 17 months that Kirkland (32-1, 28 knockouts) will have entered the squared circle. While the Texan had been offered several fights, he turned them down, saying he wanted meaningful fights.

“Overall I haven’t been in the limelight but I’m been working hard in training,” the 31-year-old southpaw told RingTV.com. “Certain fights they brought to my attention, [opponents] for me to fight, I clearly didn’t have an understanding why they brought these opponents [up] as far as what I [would] be able to gain.

“When they brought up Glen Tapia, I saw that the situation [they thought] ‘Kirkland’s been off [so he’s safe] and [Tapia] needs to fight someone who’s a crowd pleaser.’ It was something that I can gain [from] and get myself back involved in boxing. It was two warriors. It was definitely going to be spectacular and that’s why I took that one.

“I wanted to jump back in there but I wanted to fight the proper opponent and not someone who gives me nothing. I want to work hard for everything I get. This is one of the fights I’ve wanted for a long time, I’m ready and this is who I’ve been wanting. Let’s go and make this fight happen.”

“I think Canelo is in for a hell of a long night,” said Miller. “He will never have been hit with the power James Kirkland is going to hit him with. James is the consummate pressure fighter who never stops coming. It will be an all-out war on May 9.”

As well as Canelo-Kirkland, the “World Championship Boxing” card will also feature an interesting crossroads bout between unbeaten young buck Frankie Gomez and former three-weight titlist Humberto Soto. The undercard also includes former welterweight beltholder Joshua Clottey who looks to get himself in the junior middleweight title picture; and gluttony of prospects – including 2012 U.S. Olympian Joseph Diaz Jr. – are also scheduled to fight.

RingTV.com – What are your thoughts on facing Canelo?

James Kirkland – Canelo brings almost the complete package. He does a lot of great things in the ring. He’s a die-hard warrior in the ring. At the end of the day it’s exactly what I wanted. I wanted someone who’s a smart boxer, someone that brings the type of crowd he brings. He can actually fight someone of my caliber. They say, “Kirkland you ain’t fought anybody” but there’s a lot of people that don’t want to fight Kirkland, a lot of people don’t want to go through this type of situation. At the end of the day it’s going to take place May 9.

RTV – What does Canelo bring to this fight in terms of strengths and weaknesses?

JK – One thing I don’t do, I don’t elaborate what fighters can do and what they can’t do. I focus on fight night. When it comes down to my team and trainers we discuss his good and bad things but I don’t discuss it outside the camp because what’s the overall method of exposing that. Now he has something else to bring to the table because of holding your tongue. So overall I’m going to keep what I know and what my team know for us.

RTV – How eager are you to put the 17 months of inactivity behind you?

JK – Fighting is in my blood. I’ve been looking forward to it. The layoff has been the thing on people’s mind. If they say Kirkland’s fought two or three times this year they wouldn’t have a doubt that I’m the better fighter. But since the layoff they say the activity of Alvarez that it’s pretty much an Alvarez fight.

JK – What motivates me is when I’m in the gym working hard and I’m on my last bit of energy when my coach is pushing me and makes me give another six, seven, eight rounds in. That’s the motivating part, it comes to your people being there and your people supporting you. You have to be focused on just the fight. I’m already motivated when I step in the ring and I’m looking at my opponent and I’ve got to put that will power and threat and that kill zone [on my opponent]. That’s my motivation.

RTV – You mentioned fights that you were offered that didn’t do anything for you. What fights?

JK – I don’t need to go into it. Certain fights that were brought to my attention and I thought they weren’t a good idea.

RTV – You’re not working with Ann Wolfe for this fight. Why?

JK – Like I always say Ann Wolfe great trainer, I take nothing away from her. She has her own methods of boxing but there are certain things I felt I needed for this fight to take me to the next level to beat able to beat Canelo Alvarez.

RTV – It was reported leading into the fight that your weight was up in the 180s or so. What can you tell us about this?

JK – I don’t even know how that effects or takes away from the fight what my walk around weight is. The overall thing for me is whether I was big, small, tall, whatever. I’m thinking about fight night. I have to be on weight the day before fight night and that’s the weight I look forward to being.

RTV – Who are you working with and tell us about the training?

JK – One thing I can say is my training camp been sensational. I’ve taken it to the next level. I’ve just tightened up the things I lacked and didn’t really care about. I think I’ve made one of the best moves I’ve made. I’m training in San Antonio. I have Rick Marones, Gerald Tucker and Bay Bay McClinton in my corner.

RTV – The fight takes place in Houston, which isn’t far from your hometown Austin. However, Canelo is expected to be the guy who brings a lot of support.

JK – I actually hope [the crowd] is gonna be more than [when Canelo] fought [Austin] Trout, when they fought in San Antonio. My job isn’t on what people may be seeing or thinking. I focus only on the fight. I don’t care about the people that’s there. I know it’s my fans supporting me, that helps me in a certain way but when it comes to the fighting part I have to be mentally prepared for the fight. Overall, it’s a positive thing for my fans to be there and to support and cheer me on and to see the action. That drives me to take it to another level. Mentally, you have to be tuned in just for the fight.

RTV – When you look at the junior middleweight division what are your thoughts?

JK – Honestly, I don’t know how to say thing without sounding crazy. I don’t even watch boxing. I watch some on the fighter that I’m fighting. I’ve been in boxing since I was six years old and been fighting almost every single day in boxing whether it was in a fight, sparring, working out. I’ve done it almost every day of my life. At the end of the day I train at the gym, I leave the gym and I’m not training, not talking about other fighters because I’m trying to live a lifestyle on the outside of boxing.

RTV – In closing does he have a message for Canelo?

JK – My message to Canelo is it’s going to be exactly what you want it to be, Canelo, and that’s a hard, hard fight.