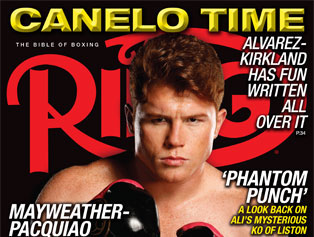 The July 2015 issue of THE RING Magazine is on newsstands now. Don’t know where to find a newsstand near you that sells THE RING Magazine? Click here. To subscribe ÔÇö both to the print and digital versions ÔÇö click here. You can also purchase the current issue on that page.

“I’ll tell you what, it’s going to be a much better fight than the fight on May 2nd. I’ll guarantee that.”

James Leija made that comment about Saturday’s Canelo Alvarez-James Kirkland fight in Houston more than a month before Floyd Mayweather Jr. outpointed Manny Pacquiao on Saturday. Turns out the fighter-turned-promoter might be right.

Mayweather-Pacquiao was a dud in terms of action. The boxing world will be stunned if Alvarez-Kirkland isn’t rip-roaring fun.

Texas-based contributor Bart Barry explores the details of the Alvarez-Kirkland fight in the July 2015 issue of THE RING Magazine, which is on newsstands now. 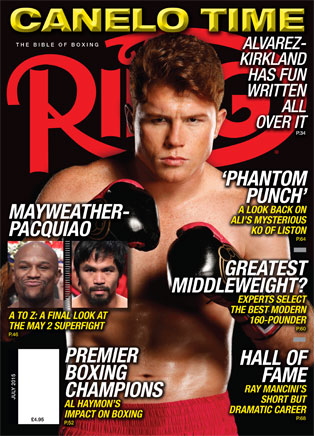 Barry in Another Kind of Spectacle about the fight’s winding path, from May 2 in San Antonio to May 9 in Houston after it was announced that Mayweather and Pacquiao would fight on the earlier date. Alvarez is determined to fight on his country’s holiday weekends – Cinco de Mayo and Independence Day in September – but was willing to wait.

“I didn’t feel anything bad at all,” said Alvarez, when asked if the calendar adjustment bothered him. “We moved the date out of respect, out of intelligence, too, and also to preserve tradition.”

Barry also writes about Alvarez’s remarkable popularity in Texas. Canelo drew almost 40,000 when he fought Austin Trout at the Alamodome in 2013. And promoters are expecting another throng at Minute Maid Park, where the Houston Astros play.

And, of course, there’s the fight itself. Kirkland is unpredictable outside the ring but a dynamo inside it; he throws hard, sometimes wild punches until either his opponent or he (in one case) can no longer fight.

Add Alvarez’s aggressiveness to the equation and you get a combustible mix that will be fun to watch.

Contributor Mark Whicker writes about Kirkland in Not Too Late. The mercurial fighter hasn’t realized his potential because of his many missteps outside the ring. However, he has a golden opportunity to get things right on Saturday.

Also in the July issue, in Revolution, contributor Ron Borges explores the profound impact Al Haymon and his company Premier Boxing Champions is having on boxing.

Haymon has collected many of the best fighters in the world and brought boxing back to free television in a big way. Now all eyes on him on PBC to see whether his bold moves will be a boon to the sport.

We bring back one of our most popular occasional features this month, a tournament-style competition to determine the best of modern times in a specific weight class. This month: middleweights.

Thomas Hauser had 24 experts indicate how they believe nine 160-pounders would fare against one another and, using a point system, determine a winner. Who was it? Well, we’ll just say you won’t be surprised.

In Double Shot, contributor Don Stradley looks back on the “Phantom Punch” fight, in which Muhammad Ali stopped Sonny Liston in the second meeting. The fight took place 50 years ago.

Contributor Bernard Fernandez, in Shooting Star, looks back on the career of Ray “Boom Boom” Mancini, who will enter the International Boxing Hall of Fame in June. Mancini wasn’t at the top for long but he made his mark while he was there.

And, in “The Legacy Lives On,” contributor Gareth A Davies describes the life of revered trainer Brendan Ingle and the immense impact he continues to have on boxing in the U.K.

Also in the July issue: