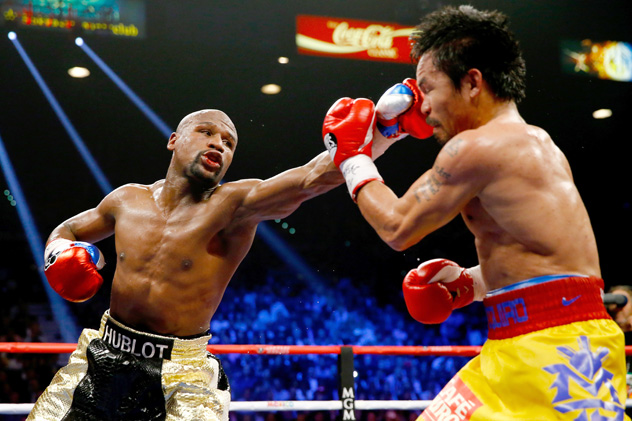 After the final bell sounded and Floyd Mayweather Jr. pumped his right fist into the air as he went back to his corner, the boos filled up the MGM Grand Garden Arena from a crowd – a fiscally affluent crowd, might I add – displeased by what took place in the squared circle for 36 minutes. Social media also exploded with vitriol and overwhelming displeasure that the world had waited five years for the epic showdown between Mayweather and Manny Pacquiao and received a fight – with a hefty PPV price tag of $100 – that was an epic letdown in terms of action and drama. In the end, it was Floyd Mayweather doing what Floyd Mayweather does best by putting together yet another dominant performance that saw him fluster and frustrate Pacquiao en route to a unanimous decision that was never in question.

And now a majority of people who witnessed Mayweather’s cunning application of the sweet science are upset as if he robbed them of their hard earned money at point blank range with a boring performance loaded gun. Well, he kind of did because you should have known better. He’s not the richest athlete in the world because he’s Arturo Gatti or Mike Tyson in the ring. He’s the richest athlete because he has convinced you to pay to see him lose.

And he didn’t lose.

An estimated $200 million dollars in his bank account for 36 minutes of work.

Yet another future hall of famer made to look like an average boxer.

It didn’t live up to your expectations, you say?

It surely lived up to Mayweather’s.

But, tell us, what exactly did you expect?

For those who are avid fight fans, you knew what to expect if Mayweather were to win. You can hope all you want for an all-action fight, but there’s really no excuse for you to be upset because you likely were hoping for something that has rarely been a part of Mayweather’s arsenal: offensive excitement.

You were a casualty of hype. Shame on you for being sucked into it.

And then there are those who only watch boxing every so often that made up the bulk of the record-breaking viewership. The fans who we warned you about in the column “Mayweather vs. Pacquiao: A hardcore fight fan’s worst nightmare.” The casual fans that know more about Mayweather’s out of ring transgressions than his in-ring prowess and root with their heart instead of their mind. It’s okay; it makes sense why people would want Pacquiao to win. Mayweather hasn’t exactly made himself a likeable personality. But that’s been his modus operandi (aside from his domestic allegations that surely weren’t part of his game plan) since 2006 in an effort to overcompensate for his lack of fan-friendly knockout power. Mayweather has become a mainstream star because of how he affects those who don’t watch boxing with his grating and polarizing “Money” persona. He makes you want to see him lose and despise the fact that a man who can be such a pompous a-hole is also the best boxer alive. It’s not supposed to be this way. The bad guy is supposed to eventually fall. It’s modern theater but Mayweather’s spin on the tale has been captivating, to say the least. A man with a personality such as his would be thought of as an in-ring brute who utilizes imposing power to dispatch of his foes. But Mayweather is the exact opposite. He’s a superb grandmaster who excels in the art of hitting and not being hit. He has a master’s degree in the sweet science and a PhD in marketing. He’s a trash talking Bobby Fischer who has brought mainstream attention to his craft and made a ton of money because of it.

You, too, were suckered into watching this fight in hopes that Manny Pacquiao could finally put an end to Mayweather’s reign of terror. And you paid a pretty penny for it.

But when the lights come on, Bobby Fischer does what Bobby Fischer does best, play chess. And chess isn’t exactly a fun game to watch. Boxing, of course, is different because the object is to beat up your opponent. The more blood and guts in a boxing match, the more excitement the fans get out of it. But that’s not the rule and not how you win. Mayweather has always been about self-preservation and his defensive prowess is the reason why he’s been able to remain undefeated at the age of 38. To the trained eye that appreciates Maywather’s ability, it is truly mesmerizing. But you have to understand the small nuances that Mayweather does in the ring that undresses his opponents.

Mayweather figures out your best weapon within the first couple of rounds and removes it from your arsenal. Mayweather realized that Pacquiao was a high volume puncher and a rhythm fighter who has thrown an average of 65.5 punches/round while landing 22.6 of those punches in his last 12 fights. So what does Mayweather do? He deploys a jab and a straight right hand that disrupts Pacquiao’s rhythm and couples it with lateral movement that kept the Filipino guessing and made him overthink his approach. Against Mayweather, Pacquiao threw only 35 punches per round and landed an abysmal six of them. He was clearly outsmarted by Mayweather.

But that wasn’t fun to watch, was it? A majority of those that watched wanted to see someone put on their back. However, Mayweather isn’t here to give in to your demands. He already has your money and fought the way he wanted to. He entertains you by making you dislike him, not by anything he does in the ring. In a way, it’s unfortunate because boxing should be about excitement. But there should also be a certain level of appreciation for Mayweather and his remarkable ability in the ring. It’s going to be up to the opponent to take him out of his game. And with his greatest rival turned away with ease, there appears to be no true challenges left (or that Mayweather is willing to take).

It looks like he’ll have his final fight in September and then ride off into the sunset on a private jet and a vault filled with currency like a modern day Scrooge McDuck.

You don’t have to like his tactics, his personality or anything that has to do with him. You can hate him all you want. But the bad guy won again and we only have ourselves to blame.