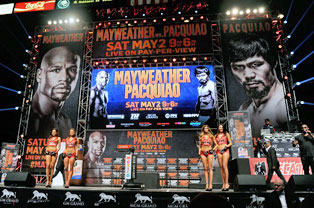 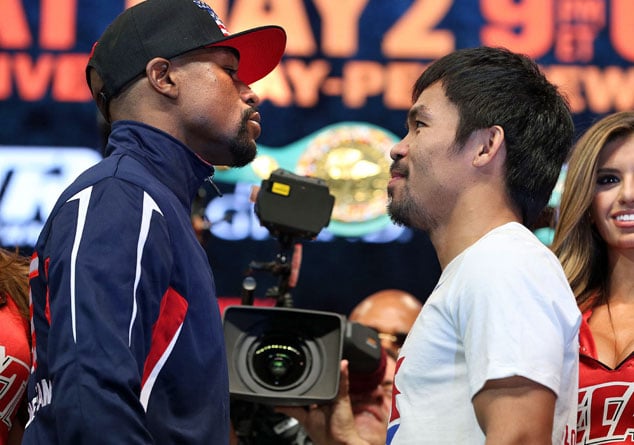 LAS VEGAS – It’s hard to believe Floyd Mayweather Jr. and Manny Pacquiao will fight one another in less than 24 hours.

The journey has been long and winding and crazy over the past half decade, as egos and drug tests and God knows what else scuttled apparent agreements and dashed hopes that fans would ever see THE fight of this era. Then, when all the powers that be finally decided that there was too much money on the table to resist, the two camps finally found a way to strike a deal.

And what a deal. Mayweather and Pacquiao stand to make well in excess of $100 million each, depending primarily on how high the pay-per-view numbers are. Those who are tracking the buy rate in the days leading up to the fight say that 4 million is a realistic possibility. If you do the math – $89.95 (for low-definition) or $99.95 (for high-def) times 4 million – you get a very, very high number.

And that’s just domestic pay-per-view. There is foreign pay-per-view, the live gate (with some tickets selling as high as $180,000, according to one report) and other streams of revenue, making this by far the richest fight in history. The money seems to the most staggering aspect of the event, one that’s difficult for boxing fans and non-fans alike to comprehend.

Many observers have also asked: What does the fight mean for boxing.

Will it give the niche sport a much-needed boost, raising awareness of what the sweet science can offer and attract new fans? Or will those who normally have no interest in boxing, who evidently are fascinated with Mayweather-Pacquiao, go away and never be seen again after Saturday night?

Of course, that depends at least in part on what happens in the ring.

If it falls flat with the world watching – for example, if Mayweather fights carefully and wins a boring decision – boxing could become a laughing stock. If we somehow get a classic fight – one that does the hype justice – perhaps casual and non-fans will fully understand the appeal of the sport and stick around.

One rueful thing is that 4 million homes isn’t a huge number by objective standards. Writers in the media center looked at each other wide-eyed when someone asked: “What kind of numbers would this fight do if it were on free TV?”

“It would be like the Super Bowl,” one declared. And no one argued with him even if it was a slight exaggeration.

That kind of exposure would’ve given the sport a gargantuan platform but the business model wouldn’t work for Mayweather and Pacquiao, who demand the kind of paydays only pay-per-view can provide. Thus, boxing’s reach remains limited even in terms of this fight.

No matter what, the future of boxing does not hinge on this fight, as some seem to have suggested. The sport doesn’t have a huge fan base but it has a devoted one, one that is excited about a cadre of talented young fighters – Gennady Golovkin, Terence Crawford, Sergey Kovalev, Canelo Alvarez, et al – ready to step in when Mayweather and Pacquiao go away.

The sport’s devotees aren’t going anywhere. Mark Twain could’ve been speaking for boxing when he said of his premature obituary: “Reports of my death have been greatly exaggerated.”

Then there is the fight itself, the one hardcore fans have coveted for so long. These fans don’t necessarily dwell on paydays or the health of the sport. They are dying to see these two finally do battle.

Some have suggested that it is happening too late, that the aging fighters we’ll see on Saturday are damaged goods. That’s misleading. Yes, the fight should’ve happened around five years ago, when both Mayweather and Pacquiao were at the peak of their abilities. That would’ve been optimal. Neither fighter today is quite as good as he once was.

Mayweather, 38, had a little trouble with Marcos Maidana, which seemed to expose a chink in “Money’s” armor. And Pacquiao, 36, lost back to back fights in 2012, a controversial decision against Tim Bradley and a stunning knockout loss to Juan Manuel Marquez. Some wondered whether he was finished.

Guess what, though: Mayweather (47-0, 26 knockouts) and Pacquiao (57-5-2, 38 KOs) are still among the best fighters in the world. Mayweather, slippage or no slippage, is universally considered No. 1 pound-for-pound. And Pacquiao is as high as No. 3 on some lists.

How often do Nos. 1 and 3 face one another in the ring? Rarely. This is special by any standard.

And the five or six years of on-again, off-again negotiations? That was frustrating. The never-ending period of limbo, which inspired a zillion news reports about the potential matchup, also served to hype the fight to a point where a promotional tour was unnecessary. The matchup might be bigger now than ever.

That’s why hardcore fans are – or at least should be – drooling right about now. The two most compelling and important fighters of their generation, who remain wonderful athletes, are about to give the sport a special gift. This is our Sugar Ray Leonard vs. Thomas Hearns I. We live for this.