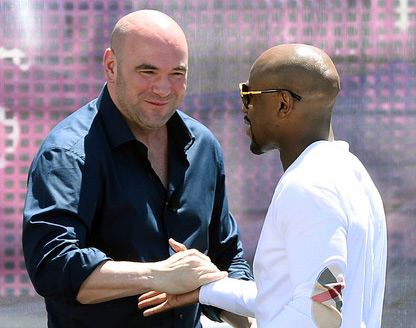 UFC boss Dana White is a mega-boxing fan, and pugilism was his entry into fight sports. The man who took part in smokers in South Boston and learned a part of the trade which helps him gauge talent, is pumped for MayPac, to the point that he even hit the Friday weigh in at MGM.

So, who wins this clash of the boxing titans?

“I’m a Pacquiao fan but I’m going with Mayweather,” White told me. “I didn’t think Manny looked too good in his last fight. I think that was the fight that made Floyd decide to fight him.

“Listen, I’m a huge fan of Manny,” continued the bald-topped, charismatic face of UFC. “I’m a real big Freddie Roach fan…and I know how important this is to both of them. But I think Floyd has the speed, the reach, the movement, I think he will outbox him.”

White is a king in Vegas, basically owns the town; I wondered, then, did he snag a ringside seat?

No actually, he doesn’t want one.