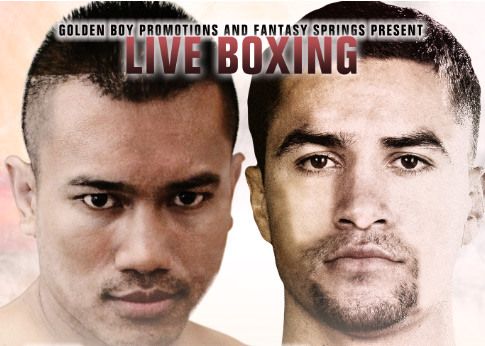 Lightweight fringe contenders Mercito Gesta and Carlos Molina fought to a split draw in their 10-round main event of a “Golden Boy Live!” card on Thursday at Fantasy Springs Casino in Indio, California. Scores for the spirited fight were 98-92 (for Molina), 96-94 (for Gesta) and 95-95.

Molina (17-2-2, 7 knockouts), a 29-year-old technician from Norwalk, California, started fast, nailing Gesta with the first punch he threw — a lead left hook — in the opening seconds of Round 1. Molina, who was trying to rebound from back-to-back losses to Amir Khan (in December 2012) and Adrien Broner (last May), as well as a knee injury, was the effective aggressor in the first two rounds.

However, Gesta (28-1-2, 16 KOs), a 27-year-old switch-hitting boxer-puncher from San Diego by way of the Philippines, remained poised and began to find his rhythm and form in Round 3. Gesta, who entered the Fox Sports 1-televised bout two victories removed from a December 2012 decision loss to then-IBF lightweight beltholder Miguel Vazquez, settled on a southpaw stance and employed fast flurry-and-move tactics during the middle rounds, which slowed down Molina’s offense and allowed him to outwork the determined Southern Californian.

Molina, who viewed the bout as a “must-win” situation, made a late-rounds surge with some lunging lead right hands that found the mark, and appeared to have the slight edge in the hotly contested Rounds 8, 9 and 10, thanks to consistent pressure and combinations when in close.

Gesta and Molina felt they did enough to earn the victory, but both fighters can take solace in the fact that they displayed their talent and skill while putting on a good show. And, hey, nobody likes a draw in boxing but they avoided another high-profile loss.

In the co-featured bout, 22-year-old Puerto Rican prospect Jeffrey Fontanez (15-1, 12 KOs) made a huge statement by stopping battle-tested (and maybe battle-worn) gatekeeper Jose Hernandez (15-10-1, 7 KOs), a normally dangerous 28-year-old native of Ft. Worth, Texas, in the opening round.

In the opening bout of the broadcast, Irish amateur star Jason Quigley (6-0, 6 KOs), now based in Los Angeles, made quick work of Pennsylvania journeyman Joshua Snyder (9-11-1, 3 KOs) in Round 1.

On the undercard, 2012 Olympic bronze medalist Yamaguchi Falcao (6-0, 2 KOs), of Victoria, Brazil, scored a hard-fought unanimous decision over determined Gerardo Ibarra (14-3, 8 KOs), of Houston, Texas. The South American southpaw won by unanimous scores of 78-74 but the entertaining fight could have easily been a draw.