Freddie Roach: Pacquiao’s KO loss doesn’t haunt him but he expects Mayweather to look for a stoppage 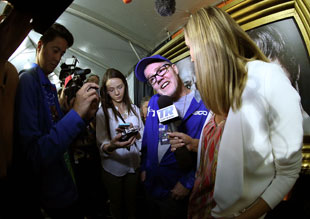 LAS VEGAS – Early in their relationship Freddie Roach asked Manny Pacquiao whether he could see videos of the fighter’s early bouts. Pacquiao showed the trainer his two knockout losses when he was a flyweight, in the 1990s.

“I said, ‘Why did you show me that?'” Roach said Thursday afternoon, a few days before his fighter is due to face Floyd Mayweather Jr. “He said, ‘It’s a part of my life.'”

Indeed it is. So is his one-punch knockout loss to Juan Manuel Marquez in 2012.

Pacquiao was stopped in three rounds by Rustico Torrecampo in 1996 in the Phillippines and Medgoen Singsurat in 1999 in Thailand, after which Pacquiao became a worldwide superstar. The stunning KO against Marquez came 13 years and many championships after the loss to Singsurat.

The Filipino icon bounced back to outpoint Brandon Rios, Tim Bradley (in a rematch) and Chris Algieri but questions linger whether the Marquez’s blow – which left Pacquiao unconscious for a short time – could play a role on Saturday. Plus, Roach suspects Mayweather will try to duplicate Marquez’s feat.

“Marquez is a great counterpuncher,” Roach said. “He fought us four times; he learned a lot about us. I think he’s a smarter fighter than anyone out there. ÔÇª I won’t say it was lucky; it was well planned. Those things happen. Manny knows getting knocked out is part of the sport.

“ÔÇª (Pacquiao) wasn’t affected by that. It was a bad knockout, something I was little worried about. He laid down a long time. I was worried. When I started talking to him on the way to the hospital, though, everything was OK.

“Then, when we got back to the gym, there were no flaws, no changes. He wasn’t gun shy. He took it very well. I have no concern about that.”

Roach expects Mayweather to test his theory early in the fight on Saturday. He believes the world’s No. 1 fighter, who has only one KO in his last eight fights, has packed on muscle with the idea of taking Pacquiao out in mind.

But it wasn’t the knockout punch – a straight right counter – that caught Mayweather’s eye, Roach believes. It was the overhand right that put Pacquiao down in Round 3.

“I would watch the first knockdown,” Roach said. “I think Floyd saw that Manny got hit with that big overhand right, a kind of sucker punch. That’s a shot that a fighter like [Pacquiao] should not get hit with. We worked on that a lot.

“I think Mayweather might come out with a shot like that because he can punch when he wants to. And I would advise my fighter to take advantage of that if he could.”

Roach certainly isn’t worried about any Marquez-like disaster. He has said repeatedly that this training camp couldn’t have gone better and that he “has a winning formula.”

And, he said, Pacquiao is energetic and in good spirits. He said he gave Pacquiao the go ahead to go for easy jog and a light “shake out” at the gym on Thursday morning even though he doesn’t want his fighter to lose weight.

Pacquiao weighed only 144 pounds on Wednesday, three below the welterweight limit. He will eat breakfast then weigh in at 3 p.m. at the MGM Grand Garden Arena. Then it’s just a matter of waiting.

“The game plan is to outscore him,” Roach said. “I think fast combinations can do that. If [Pacquiao] stays in the pocket too long and gets hit back ÔÇª that’s something we can’t do. We worked on that the entire training camp. We’re well prepared.

“If Floyd comes to fight, we’re ready for that. If he wants to run, we’ll cut the ring off. ÔÇª We had a good training camp. Manny listened really well. Manny asked me if I wanted to watch tape with him. That’s the first time he’s asked me to do that. I thought that was very good.

“We’re on the same page. He knows what kind of fight he need to fight. And I think he’s going to do it.”

CONCERN FOR HIS RIVAL

Roach and counterpart Floyd Mayweather Sr., his son’s trainer, haven’t had an amicable relationship. They’ve exchanged a great deal of trash talk over the years.

But when Roach felt his rival was slighted during the final press conference on Wednesday – Floyd Sr. was only briefly acknowledged and didn’t speak – he didn’t hesitate to make his feelings known. As Roach walked into the interview area on Thursday, he said without any prodding: “It was disrespectful that Floyd Sr. didn’t speak yesterday.”

“I don’t hate Floyd Mayweather Sr.,” he said. “His poems ÔÇª they’re cute ÔÇª but I don’t like cute so much from another guy. He doesn’t get under my skin. He tries to do the best job he can and I try to do the best job I can. There are no hard feelings.

Roach is satisfied with the choice of referee and judges for the fight. Kenny Bayless, widely regarded as one of the best in the business, will be the third man in the ring. The scoring will be done by Burt Clements, Dave Moretti and Glenn Feldman.

“Everything is going OK,” Roach said. “We have a great referee and good judges. These are people I’m familiar with most of my life. I think the referee is a good referee. I don’t think he has room for mistakes with such a big crowd. It’s the biggest fight ever.

“I think we’ll get a fair call. I trust that will happen.”

Roach said that Pacquiao has been drug tested “over 12 times” for this fight by USADA. Gone are the days when his fighter was spooked by giving blood, he said.

“He’s over that now,” Roach said. “We’ve been tested in the gym over 12 times. I hope it’s even [with Mayweather]. I don’t know about the other training camp.”