Raymundo Beltran: ‘I have persevered’ 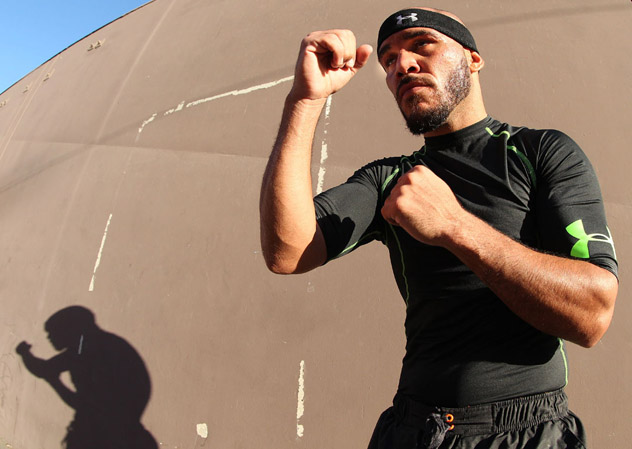 Do all nice guys finish last? One would hope not, especially if you are Raymundo Beltran.

Beltran served as one of Manny Pacquiao’s main sparring partners for many years but wanted accolades inside the ring, not in a gym.

He thought he realized his dream of winning a major title on the evening of Sept. 7, 2013 but was stunned – like the rest of the boxing world – when two official ringside judges deemed he didn’t do enough to defeat Ricky Burns for the WBO lightweight title.

While Beltran would lose his last fight on Nov. 29 to former RING champion Terence Crawford, he continued believing he was destined to win a world title.

He will get that opportunity again on Friday night.

Beltran will fight Takahiro Ao for the vacant WBO lightweight title inside the Chelsea Ballroom at the Cosmopolitan in Las Vegas, Nev. The bout will headline a Top Rank Promotions card and will be broadcast live on truTV, beginning at 10 p.m. ET/7 p.m. PT.

Crawford vacated the title when he decided to go up in weight and compete in the junior welterweight division.

Even after the controversial split draw to Burns and the one-sided loss to Crawford, Beltran never lost sight of what mattered most in boxing: an attempt to win a world title. He will get that opportunity when he fights Ao, a southpaw from Japan who has won major titles in two different weight classes.

While he is motivated to win a world title, providing for his family, which includes three children, is equally as important.

“[Ao] is a strong fighter with a lot of experience at the world level,” Beltran told RingTV via phone on Tuesday. “He’s a good fighter, who counters punches well and he tries to catch you with that left hand. I’m not so much worried about what he’s going to do. I’m more into what I need to do to put on a good show. I have a lot of confidence that I will fight well.

Beltran has always been a skilled fighter. That is represented by the handful of regional title belts he has won throughout his career but a world title belt has always eluded him. Beltran never caught a break years ago, when some fighters, who may have been undeserved of fighting for the gold, got their opportunities. While giving up or retiring may have crossed his mind, Beltran kept plugging away.

“There was a two-three year [period] where I didn’t know where my career was going,” said Beltran, who now resides in the Los Angeles area. “I believed I had the talent to compete at the world level. I just never thought I would get here.

“I believe politics played a role sometimes when I was getting passed up to fight for a title. Now we are here. It is a dream come true. I have persevered.”

Persevered he has. Since the Burns fight, Beltran’s popularity has increased. He gets stopped for autographs on photos or gloves, which was unheard of when he toiled in obscurity early on.

Now that he has “made it,” Beltran has become a mentor of sorts to young fighters. It is something he didn’t expect but the experience has been humbling.

“A lot of young fighters have come to me; they ask for me to motivate them,” says Beltran. “I tell them to keep going and to not quit. To be able to do that is just more of an example to motivate me more. I went through the hard times and I want [young fighters] to continue, even if they face hard times as well.”

While Beltran’s aggression speaks volumes in the ring, he makes subtle statements with profound meanings. In the Crawford fight, he wore trunks with the number “43” on them, in reference to the 43 young men and women who were kidnapped in late September in Iguala, Mexico and are sadly believed to be missing or dead.

Beltran will again wear trunks on Friday emblazoned with the number ’43.’

“When I wore those trunks, I received only one negative comment for every 100. I received a lot of support for that. Those are poor people who were taken advantage of. I had to make a statement.”

In or out of the ring, Beltran does make statements. Get knocked down but get back up. That would sum up his career but greatest summation of all would be winning a world title on Friday night. Beltran is capable of doing this as he has persevered in so many ways.

Beltran is one of those good guys in boxing people root for. Could a nice guy like Beltran finish first? Why not?

“I’ve always shown heart in all of my fights. No one is invincible. We’re all vulnerable. I try to do the best I can.”