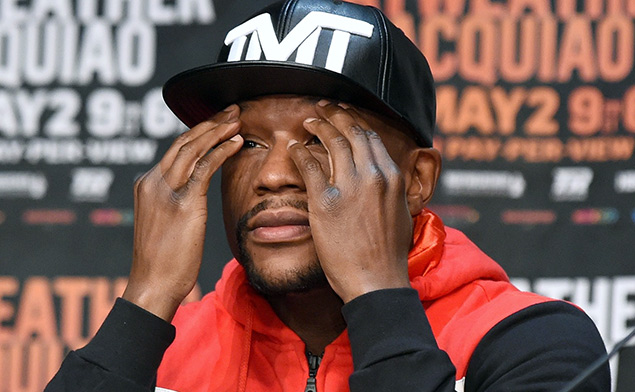 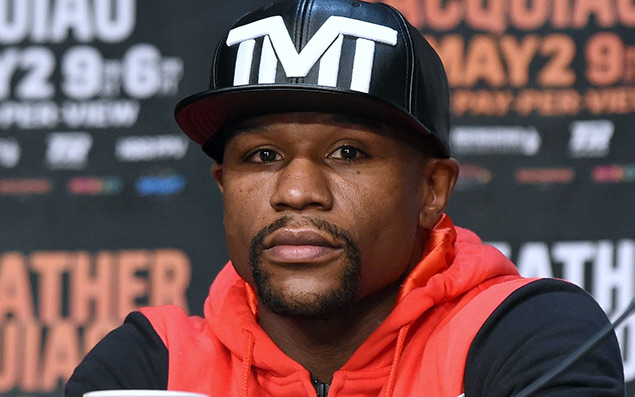 Floyd Mayweather Jr. has ‘been there and done that’ when it comes to big boxing events and he’s not hiding the fact that he’s become quite bored with all of it. Photo by Naoki Fukuda

Like a CEO who has put in his two-week notice, Floyd Mayweather Jr. can see the finish line but still has to go through the motions before he gets there. Unlike a CEO at a Fortune 500 company, if Mayweather slacks on his job, he can get knocked out. Nevertheless, Mayweather is wearing his exhaustion like one of his expensive watches and everyone can see it.

“Damn, another interview? I’m tired!” Mayweather blurted out as he headed into a private room with select members of the media after the final press conference. It was yet another round of interviews for the richest athlete in the world as he heads into the biggest fight of this generation against Manny Pacquiao on May 2. Mayweather is used to dealing with the press but this is a completely different animal in its entirety.

“I just saw all of you yesterday,” Mayweather says with a half smile. After saying very little at the press conference, he runs through a seemingly never-ending gauntlet of on camera interviews. And for a fight that has been five years in the making, Mayweather is honest when he says that there’s nothing else he can say that will be anything different than what he’s said. You see, there’s a reason he prefaces many of his answers with “Like I said beforeÔÇª” because he probably has said it beforeÔÇª many, many times. “Nothing has changed since yesterday.”

It’s evident that Mayweather is burnt out by the constant cycle of media obligations. It would be different if he hadn’t been asked the same questions over and over again. If Mayweather quit boxing and was paid $1 for every time he heard the same question, he’d still remain the highest paid athlete on that salary alone. Okay, that’s hyperbole.

“If you ask me a question, I’m pretty sure another writer can answer it for you,” Mayweather says as another writer asks whether his fight with Pacquiao is a showdown between Good and Evil. Another journalist asks if this fighter is bigger than the rest. “I’ve answered that question a thousand times. Come on!”

In all honesty, the burden isn’t all that great if that’s what it takes to be the highest paid athlete in the world. He has kind of brought this upon himself by his colorful comments in previous fights. The way he lampooned Oscar De La Hoya or shredded Arturo Gatti? How about the way he verbally ran down Shane Mosley? Not to mention his constant flaunting of money that has rubbed a number of people the wrong way. He’s given journalists a ton of ammo to unleash a number of inquiries in hopes to get a sound bite for their stories. But Mayweather is past all of that. He simply doesn’t need to sell this fight.

“I’ve always had a game plan both in and out of the ring,” Mayweather says. He’s right and he executed it perfectly. After he split from Bob Arum in 2006, a plan was hatched. Although he won’t admit it, Mayweather had to do something in order to be more than just another good fighter. Without a tremendous knockout punch, Mayweather needed to find other ways to entertain. This is when he gave birth to the pompous “Money” persona. Instead of making you want to watch him win, the abrasive Mayweather was the great heel character that people paid to see lose. And the people paid him handsomely, which is why he is at where he’s at today as the pound-for-pound king of boxing.

“Me speaking out loud and having personality, I did that in the past,” Mayweather said. “I’m a lot older and wiser now. This fight sells itself. I don’t have to do any of that anymore. My ultimate goal was to get to this point.”

Now that he’s here, Mayweather is on cruise control. He’ll handle his media obligations but he’s having a difficult time looking like he enjoys it. After 19 years as a professional, he’s worn down. Imagine if you had the same job for 19 years, no matter how big or small, there comes a time when you grow tired of doing the same thing over and over. Mayweather has reached that point.

Mayweather has said in the past that he treats boxing like a job and considers this to be the only job he has ever had. He prefers to leave boxing in the gym and would rather spend his time watching basketball and hanging out at home. He punches in and punches out, almost like a robot. He doesn’t take his work home with him and doesn’t spend a great deal of time thinking about boxing when he doesn’t have to. He admits that he very rarely watches boxing on television and simply doesn’t enjoy it like he used to.

Could these signs of fatigue and exhaustion cost Mayweather on May 2? If you are judging by the way by they are handling their media obligations, it is evident that Pacquiao is more motivated to prove that he’s better than Mayweather. And maybe, just maybe, that added incentive will push Pacquiao past Mayweather. Mayweather, on the other hand, just wants to get the job done.

It’s just another night at the office.

That might be all the motivation that Mayweather needs once he steps into the ring on Saturday night.