Manny Pacquiao seems to be in an ideal frame of mind 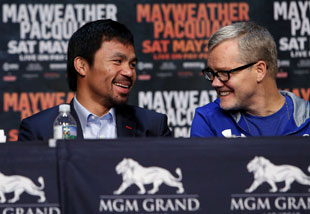 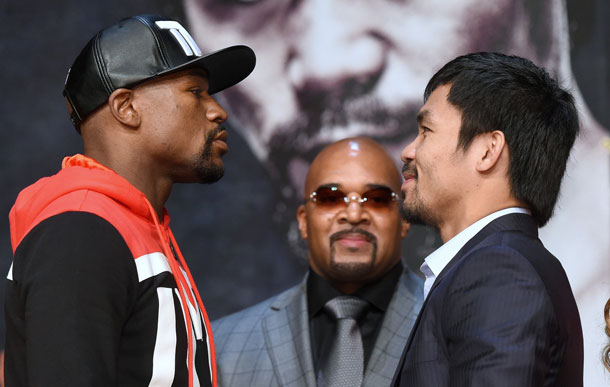 LAS VEGAS – No one can say Manny Pacquiao doesn’t know where he came from.

The Filipino’s final public comments before he fights Floyd Mayweather Jr. on Saturday at the MGM Grand were about gratitude and astonishment over his journey to this point. His story is well known: A penniless teenager moves to Manila, lives on the streets, evolves into a successful boxer and eventually becomes one of the biggest stars in the sport.

Now he stands to make in excess of $100 million for one fight. Even Pacquiao is amazed.

“I was nothing,” said Pacquiao, speaking excitedly to a few dozen reporters in a small room before the final press conference of the promotion Wednesday afternoon. He repeated the story at the press conference. “I can’t imagine a boy sleeping on the street, looking for food, starving, has now become known not only in the Philippines but the world.

“It’s beyond my imagination. I can’t be thankful enough to ÔÇª God that he gave me these blessings.”

Something is different about Pacquiao.

The most gracious of all fighters has always accommodated the media but, in the past, he seemed to go through the motions out of boredom. Same questions, same answers ÔÇª fight after fight. On Wednesday, he bounded into the interview room eager to share his thoughts.

One thing about which he has been asked a great deal is his killer instinct, which he seemed to leave in the previous decade. He insists it’s back for this fight.

“My interest in this fight, my love for this fight, my eagerness for this fight to show something,” he said, reaching for words to express a motivation level that obviously is very high. “Especially because I’m the underdog. If you think about every time I was underdog ÔÇª Marco Antonio Barrera I, Lehlo Ledwaba, my first fight in America, Oscar De La Hoya ÔÇª.

“I have a different feeling. I’m happy.”

Will happy translate into carnage on Saturday night? Pacquiao thinks so.

He was asked in the interview room why he believes God has not forced Mayweather to taste defeat. He smiled as if he knows something we don’t and didn’t hesitate to respond: “You will see on Saturday.”

Pacquiao’s confidence obviously is at least partly the result of his preparation. He and longtime trainer Freddie Roach insist they left no stone unturned in an extremely successful training camp.

That seemed to manifest itself when, at the conclusion of an uneventful press conference, the fighters engaged in the obligatory face off. Mayweather was serious, as most fighters are. Pacquiao grinned.

He wouldn’t make a prediction, saying only that he will “try my best,” and then returned to his inspiration.

“I think the fans really wanted to see this fight,” he said. “It’s good that it’s happening now, this time. ÔÇª I want to make the fans happy. I don’t want them to be disappointed. They’ve paid big money. They deserve a good fight. ÔÇª

“I fight in the name of God; that’s the most important thing to me. I want that to be an inspiration for everybody.”