Manny Pacquiao: ‘I am the same fighter I was five years ago’ 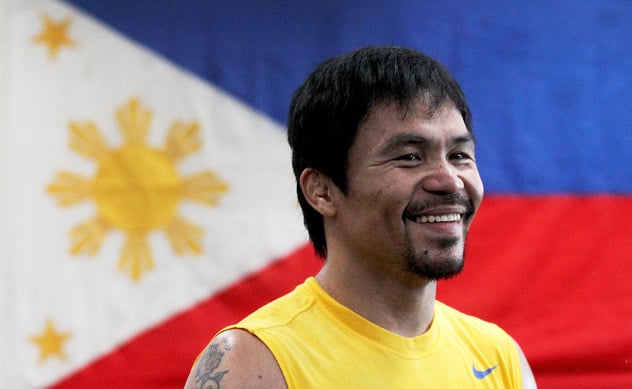 The evening we’ve all been waiting for is nearly upon us: Manny Pacquiao meets Floyd Mayweather Jr. at the MGM Grand in Las Vegas, Nev. in the highly anticipated RING, WBC, WBA and WBO welterweight championship unification showdown on May 2. The fight will be broadcast via joint pay-per-view, shared by HBO and Showtime (the latter producing the program), beginning at 9:00 p.m ET/6:00 p.m PT.
For the past several years, both fighters seemed destined not to meet, while going in different directions, facing anyone in the welterweight division but one another. Finally with no other avenues available, President and Chief Executive Officer of CBS Corporation (parenting company of Showtime) Les Moonves reached out to both camps and acted as an intermediate to help broker the fight.
While both fighters have several common opponents and even shared the same card back in Nov. 2001, in San Francisco, Calif. (Mayweather stopped Jesus Chavez in nine and Pacquiao and Agapito Sanchez fought to a technical draw), the two had never met until both men attended a basketball game in Miami in late January.
They initially talked at halftime in the Miami Heat-Milwaukee Bucks game on Jan. 27 and exchanged telephone numbers. At 1:00 a.m., the two met in Suite 909 at Provident Doral at the Blue Hotel and Spa in Miami, Fla. When asked exactly what was said on both occasions, Pacquiao said he’d rather keep that private.
The deal was finally struck on February 20.
Despite taking so long for the fight to come to fruition, Pacquiao maintains he’s still the same fighter now he was in 2009 and 2010. “Style-wise, I am the same fighter I was five years ago,” explained Pacquiao. “My determination, inspiration and killer instinct is the exact same as it was five or six years ago.”
Hall of Fame trainer Freddie Roach believes that the fight taking place now actually helps the promotion. “This fight was five years in the making,” Roach said at a Pacquiao open workout. “Promoters should realize that these types of fights are what’s best for boxing and we should have more fights like this. I’m not surprised by the hype surrounding the fight.”
Pacquiao (57-5-2, 38 knockouts) spent three weeks working on conditioning before coming to the Wild Card Boxing Club in Hollywood, Calif. for a further five weeks. Roach is very pleased with how his fighter has looked in the gym.
“Manny has really raised the bar in this training camp,” said Roach. “He’s a different Manny Pacquiao than I have seen going into previous training camps. He is punching so much harder in training for this camp. Manny is better than ever. His attitude is different and I’ve never seen him work this hard. His speed is faster; his punches are harder. I’m really happy where he’s at. His legs look great; he’s on his toes all the time.”
Top Rank Promotions CEO Bob Arum, who promotes Pacquiao, also worked with Mayweather (47-0, 26 KOs) from his pro debut in 1996 until their split in 2006. He likes what he has seen from the Filipino in the build-up.
“I would say Manny is more motivated for this fight than any other fight I’ve seen him prepare for,” said Arum. “I’m looking forward to May 2. I love Manny’s chances of winning; that’s the main thing. He looks great; he’s motivated, no nonsense, and I think he’s going to put on a performance for the ages. It’s going to be hard for him to top his performance against Oscar De La Hoya but I think he will in this fight.”
Both fighters enter on the back of wins last year. Pacquiao easily outpointed Chris Algieri in November, while Mayweather repeated his May 2014 win
over Marcos Maidana in a rematch last September.
“I was very pleased with my performance,” Pacquiao said whilst sharing his thoughts on his and Mayweather’s most recent outings. “I scored six knockdowns, won every round and did everything I wanted to do against a younger, undefeated world champion. Floyd Mayweather did what he should have done in that fight.”
Having achieved so much in boxing, Pacquiao doesn’t believe his legacy is on the line, though he acknowledges this would be his best win.
“I am very secure and satisfied with what I have accomplished in my career,” he said. “The importance of this fight is not so much for my legacy but to bolster the confidence and renew the credibility of the sport of boxing. The fans needed to know their wishes were important.

“I am very happy to finally bring this fight to the fans who have asked for it for such a long time. They have waited long enough. It is going to be a great event for boxing. I am very excited to finally have this fight. It will be a night to remember.”

Now that the stars have all aligned, we all hope so, Manny.
Questions and/or comments can be sent to Anson at [email protected] and you can follow him at www.twitter.com/AnsonWainwright.