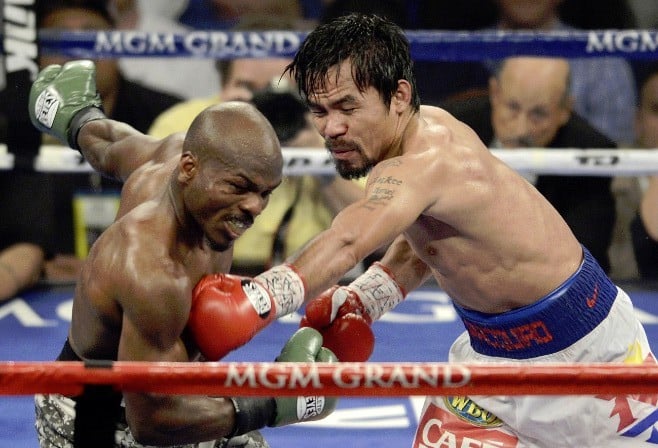 Editor’s Note: This feature originally appeared in the July 2015 issue of Ring Magazine

Manny Pacquiao burst onto the world boxing scene more than a decade ago, capturing the fans’ imagination with an intoxicating blend of speed and power that left many opponents in a heap on the canvas.

All told, Pacquiao has won 10 world titles in a record eight weight classes – four of them as lineal champion.

His first was the WBC flyweight belt, which he won in Thailand just two weeks before his 20th birthday in 1998. He lost the title in his second defense in part because of weight problems, but resurfaced at junior featherweight. It changed his life and boxing.

In his stunning breakout performance, Pacquiao won the IBF title by stopping rising star Lehlo Ledwaba in eight rounds on the Oscar De La Hoya-Javier Castillejo card at the MGM Grand in 2001. 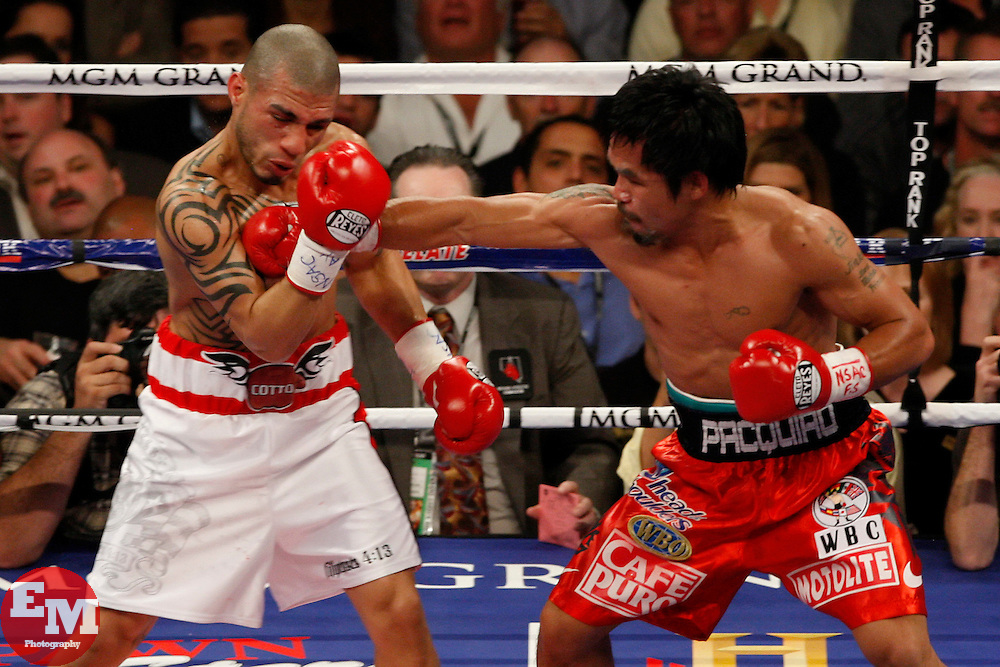 The past few years have been challenging for Pacquiao. He lost a controversial split decision to Bradley in June 2012 – his first setback since 2005 – and suffered a one-punch knockout against Marquez six months later.

However, Pacquiao bounced back with three wins – Rios, Bradley in their rematch and then Chris Algieri – to dismiss any notion that he was finished as an elite fighter. His newfound momentum set up the showdown with Floyd Mayweather Jr. on May 2.

Pacquiao is currently 14-2-2, with eight knockouts, in world-title fights.

One thing that can’t be quantified, though, is the proud Filipino’s profound connection with his people.

“Bringing glory to my country and my people with each victory renews my pride in my Filipino heritage,” Pacquiao told The Ring. “Moving up two weight divisions to beat Oscar De La Hoya and being named Fighter of the Decade by the BWAA are my next proudest accomplishments.”

Pacquiao is very busy outside of boxing. He has five children with his wife, Jinkee. He also is a congressman for the Sarangani district and a reserve officer in the Armed Forces of the Philippines. He has appeared in several movies, is a recorded singer and is player/coach of a pro basketball team in his home country.

He graciously agreed to speak to The Ring about the best he has faced in 10 key categories.

BEST JAB
Oscar De La Hoya: His jab is a tactical weapon. It can set up a punch or act as a weapon.

BEST PUNCHER
Miguel Cotto: I can still feel some of those punches he threw at me. Staying on the ropes is not the best place to be when you are fighting him. He’s also accurate. He’s incredible.

FASTEST FEET
De La Hoya: He moves so quickly and effortlessly. He is a complete athlete.

SMARTEST
Cotto: It was hard to bait him. He has seen it all. I really had to out-hustle him. He made me work.

BEST CHIN
Antonio Margarito: That fight was a war. It was brutal. I threw everything at him and he not only took it but came back for more. Incredible.

STRONGEST
Margarito: Big and strong is an understatement. His body shots hurt me several times throughout our fight.

BEST DEFENSE
Joshua Clottey: And not for a good reason, at least for the fans.

BEST SKILL SET
Juan Manuel Marquez: He is the only fighter who really could figure me out and anticipate my moves. He is a brilliant counterpuncher and a tremendous warrior.

BEST OVERALL
Several: I cannot specify one. Oscar De La Hoya, Miguel Cotto, Marco Antonio Barrera, Juan Manuel Marquez and Erik Morales all had tremendous skills. They commanded respect because they were all multi-dimensional. I had to be on my toes and give them my 100 percent concentration because they were so dangerous in the ring.