Wladimir Klitschko is held to a higher standard: Weekend Review 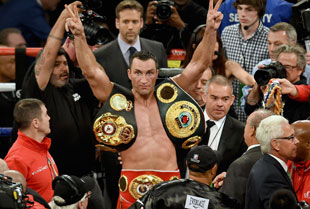 Wladimir Klitschko: Everyone acknowledges that Floyd Mayweather Jr. has been a dominating fighter since the day he turned professional in 1996. Klitschko has been at least as untouchable in terms of thorough victories, at least for the past decade. The Ukrainian has been so successful that some of us celebrated simply because Bryant Jennings wasn’t demolished in short order on Saturday in New York, as many had expected. Look at the scores, though: 116-111, 116-111 and 118-109. That’s 9-3 and 11-1 in rounds, which means it was a one-sided fight even if Klitschko was disappointed that he couldn’t put Jennings away. I had it 117-110 (10-2 in rounds). Did we see some chinks in Klitschko’s armor? Perhaps. Jennings might’ve demonstrated that a particularly good athlete with solid skills who believes in himself can frustrate the champion to some degree. That’s reaching, though. The idea is to win and Klitschko (64-3, 53 knockouts) did it conclusively one more time. He’s 39, an age when most fighters are either finished or winding down. He’s a young 39, though. Like Bernard Hopkins, he has taken care of himself over the years and has endured little punishment in the ring since the mid-2000s. I believe Joe Louis’ record of 25 consecutive successful title defenses is within his reach even though the streak is only at 18 at the moment. He maintains good work habits and he somehow remains passionate about what he does. Thus, as he put it, “The Klitschko story continues.”

Bryant Jennings: I know it sounds strange to say that a fighter can make a positive statement in a one-sided loss but I think Jennings did. The man turned pro in 2010, a mere five years ago. He had only 19 fights going into Saturday. And he was coming off a shaky performance against Mike Perez, against whom he had to gut out a split-decision victory. One knowledgeable writer walked past me moments before the opening bell on Saturday and said “two rounds,” meaning Jennings (19-1, 10 KOs) would last only as long as it took for Klitschko to land a big right on the button. It never happened. Instead, Jennings, who stressed repeatedly beforehand that his athleticism would give Klitschko trouble, proved to be extremely difficult to hit cleanly. Klitschko admitted as much, saying the young challenger frustrated him. Jennings didn’t do enough offensively to win rounds, which cost him a realistic chance to emerge victorious. Thus, he had to settle for a solid performance in defeat. Jennings didn’t travel from his home in Philadelphia to New York for a moral victory, though. An upset of Klitschko would’ve been a wild dream come true and all that would’ve gone with it. He made that statement, though: He demonstrated that he belongs among the best heavyweights in the world. That will translate into more big fights and big money as long as things go well. Yes, Jennings lost. He also took a step forward.

Ali-Santana: I expected Sadam Ali to outclass Francisco Santana on the Klitschko-Jennings card. And it appeared the former U.S. Olympian would do so in the first couple of rounds, when his quickness and polished skills seemed to befuddle Santana. I thought Ali would build on that, break Santana down and win in dominating fashion. Santana had other ideas. The Californian proved to be a machine with only one gear: forward, as he attacked Ali from beginning to end to turn an apparent wipeout into a competitive fight. To his credit, Ali didn’t wilt. He returned fire with fire, even if he did so going backward for most of the fight. And, according to CompuBox stats, Ali landed more punches. That was reflected in the scoring: 97-93, 97-93 and 100-90, all for Ali. I could see a decision for Ali (22-0, 13 KOs) but I believe the judges should’ve given Santana (22-4-1, 11 KOs) more credit based on reasonably effective aggression. I can live with the 97-93 scores, seven rounds to three but I believe the 100-90 score from judge Alan Rubenstein was extreme. In the end, Ali deserves credit. He weathered a human storm to remain unbeaten and on track for bigger and better things. And Santana undoubtedly earned fans with his spirited performance. There we no losers in this fight.

Klitschko-Fury: Well, I believe Klitschko-Fury is actually the second best matchup – I’d rather see Klitschko-Deontay Wilder because of Wilder’s power – but a battle between the Euro giants has fun written all over it. Klitschko and Fury both want the fight, which would take place in a soccer stadium either Germany (Klitschko’s home base) or the U.K. possibly toward the end of the year. I can’t imagine an empty seat. The talkative (or obnoxious, depending on your point of view) Fury will make the lead-up to the fight entertaining. And a battle between the 6-foot-6 Klitschko and 6-9 Fury would be compelling as long as it lasts. Is Fury the man who could take Klitschko down? Probably not. He is unbeaten, so he knows how to win, but he is inferior to Klitschko in every way except height and age (Fury is 26). Wilder is no more advanced than Fury in terms of skills but possesses horrific power, which would add an element of drama. That fight could happen next year. And the man many think will succeed Klitschko as the dominant heavyweight, Anthony Joshua, is a year or two away from elite status. So, for now, Klitschko-Fury is about the best we can do. And it’s not bad.

I guess I was wrong about Anthony Dirrell. I thought the now-former WBC super middleweight titleholder would have staying power because of what I saw as his all-around ability and poise. Now, after going 1-1-1 in his last three fights, it appears that Dirrell (27-1-1, 22 KOs) might be more a gatekeeper than a major player at 168 pounds. Or so it seems at the moment. Dirrell lost the title to Badou Jack (19-1-1, 12 KOs) by a majority decision on Friday in Chicago. We’ll see how Dirrell responds. And kudos to Jack, who rebounded from a first-round knockout loss to Derek Edwards in February of last year to win three in a row and a world title. ÔÇª Danny Jacobs (29-1, 26 KOs) has stopped all nine of his opponents since he was knocked out by Dmitry Pirog in 2010. That includes a 12-th round KO of Caleb Truax ((25-2-2, 15 KOs) on the Jack-Dirrell card. Jacobs should be applauded, particularly after overcoming cancer (as Dirrell did), but he has yet to approach star status. He’s only 31, though. He still has time. ÔÇª Of course, the talk among boxing writers in New York for Klitschko-Jennings centered on the Mayweather-Manny Pacquiao fight this Saturday. No one is happy about the manner in which credentials have been handled – many of us still don’t know where we will be watching the fight at the MGM Grand, in the arena or on TV in the media center – but everyone was interested in weighing in on the fight. I discussed it with about 15 writers and only one thought Pacquiao would win. More than half thought the fight would be competitive, though.