Roach: ‘I really think Manny is punching harder than ever’ 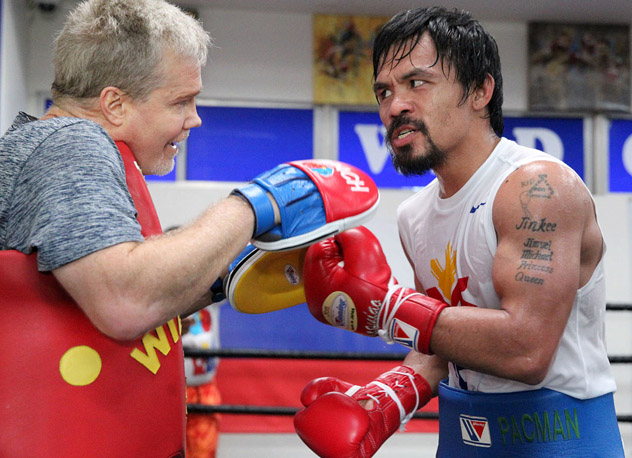 He knows fans are going to say he’s in hype mode but Freddie Roach will swear on a stack of bibles that Manny Pacquiao’s power and speed are off the charts.
“He’s punching better than ever. He’s faster than ever. He’s in a really, really good place,” said the trainer on Friday. Roach will win his seventh Boxing Writers Association of America “Trainer of the Year” award and his older bro will hit the gala dinner tonight, in NYC, to get the bauble. “I love Manny in this fight! He’s in a good place right now!”

“I really think Manny is punching harder than ever,” he continued. “You remember that one punch on [Ricky] Hatton, knocking him out cold. I can see it happening again!

Yes indeed, Roach says he sees some needed killer instinct in The Congressman in preparations for his May 2 opponent, Floyd Mayweather Jr. “I just saw him hurt one of his sparring partners and he tried to finish him off. If I didn’t call it off, say that’s enough, [Pacquiao] would have. He is focused. He’s been at a different level since this fight was announced.”

Maybe the lone downside to recent days at MannyCamp: Roach is a bit poorer these days. The swear jar gets five bucks whenever anyone drops an eff-bomb. Uh, ohÔÇªhow foul-mouthed has Roach been.