The Mayweather dynasty: From THE RING Magazine 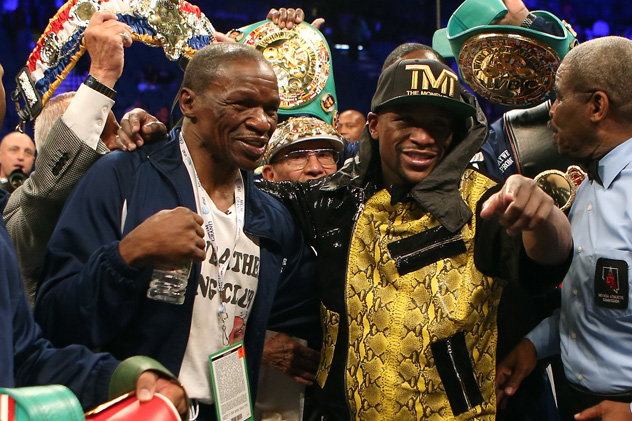 This is the sixth in a series of stories on Floyd Mayweather Jr. and/or Manny Pacquiao that appeared in THE RING Magazine in recent years. This piece on the Mayweather family, written by Tim Smith, originally appeared in the October 2014 issue (ages and records reflect this). The current issue – previewing the May 2 fight – is on newsstands now. Don’t know where to find a newsstand near you that sells it? Click here. To subscribe — both to the print and digital versions — click here. You can also purchase the current issue on that page.

THE MAYWEATHER ERA STARTED WHEN FLOYD SR. WAS A CHILD AND IT CONTINUES TO THRIVE

Floyd Mayweather Sr. had not thought much about boxing until he ran into a kid named Danny Brown at his school in Grand Rapids, Michigan, in the mid-1960s. “They called him Buzz Brown,” Mayweather told THE RING. “He was one of those guys who was always hanging around, asking guys for money. I don’t know why but one day he just hit me in my eye.”

Mayweather, a seventh-grader at the time, was noted around the school as a kid who was good with his fists and wouldn’t back down from anyone. So he squared off with Buzz Brown in the schoolyard. As the fight ensued, a teacher arrived on the scene and gave the boys two choices: They could be expelled for fighting or they could go to the neighborhood gym, lace on the boxing gloves and settle it there in the ring. They chose the gym.

“They were calling me Sugar Ray (Robinson) that day because I was victorious,” Mayweather said. “I was touching him up pretty good. Danny Brown was the guy who taught me to fight in gloves.” 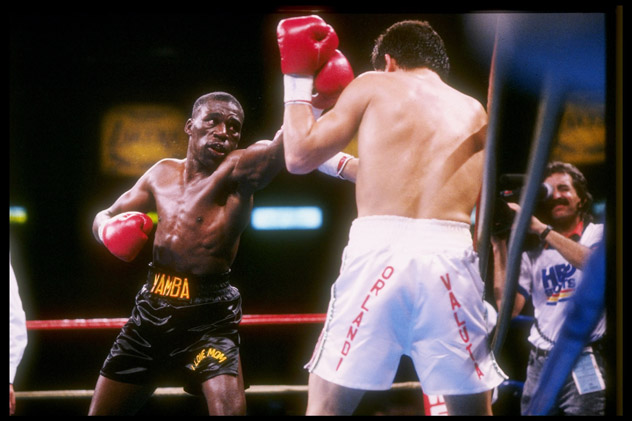 Little did he know at the time that a boxing dynasty was born that day, the Mayweather Dynasty, which eventually saw Roger and Jeff Mayweather follow their older brother into the sport as both fighters and trainers. And, of course, they were followed by Floyd Jr., who would become the best fighter in the world.

“Boxing is stamped by the Mayweather name,” said Jeff Mayweather.

Floyd Sr. learned his craft by becoming a regular at the Tawsi Gym in Grand Rapids, absorbing all the lessons he could. He put them into practice in city and state competitions. Soon he was winning tournament after tournament and attracting the attention of the older boxers at the gym.

“I used to box guys down there and they always used to say how good Floyd’s right hand and his hook was, older guys who had gone to the Golden Gloves,” he said.

Floyd Sr. turned pro in 1974, by which time he had become a pied piper to his brothers, who wandered into the gym and never left. They had varying degrees of success as professionals. Floyd Sr. never won a world title and broke his hand on the way to losing a decision to Sugar Ray Leonard in his biggest fight. Roger had great success on the professional level, winning titles in two weight divisions. Jeff was a contender.

Their greatest contributions in boxing might have come as trainers, as Floyd Sr. and Roger have guided Floyd Jr. Jeff has trained former WBO heavyweight titleholder Sultan Ibragimov, among others.

In either role – as fighters or trainers – the Mayweather family boxing story has been played out all over the world.

“Roger had a great career. Floyd Sr. and I had decent careers,” Jeff said. “We made history as trainers. Two questions that will always come up with us: Name three brothers who all fought Olympic gold medalists (Floyd Sr.: Leonard, Roger: Pernell Whitaker, Jeff: Oscar De La Hoya) and name three brothers who trained world champions at the same time. We’ve done something that will never be surpassed.”

They’ve also perfected a defensive posture – the Mayweather shoulder roll – that has been imitated by other boxers but rarely duplicated with the success of a Mayweather.

“I can’t take the credit for that,” Floyd Sr. said. “That came from a masterful man who taught me that, man named Dale Williams from Detroit. He was a great trainer. That man taught me all kinds of tricks – hook off the jab, feint to the body and then come up top. That’s where Floyd (Jr.) got the shoulder roll from. I’m the one who taught him all the stuff.” 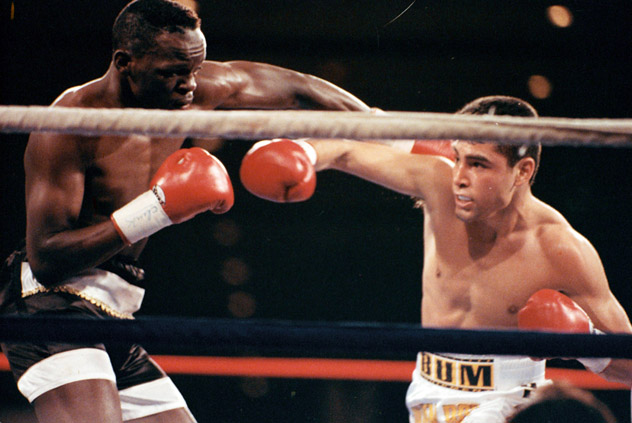 Floyd Jr. is 37 now. As his career winds down, the obvious question for the Mayweather family is who will continue the dynasty. Not even the Mayweathers know the answer. It depends on what path members of the next generation decide to take.

Jeff, the youngest of the three brothers, was a reluctant ring warrior. He said he had no real interest in becoming a boxer.

“I never cared about boxing,” he said. “I followed my brother Roger so much that he said if you’re going to be coming to the gym every day you need to learn how to fight. I loved basketball. I was only 5-8 but I thought I was going to go to the NBA and be the next Spud Webb. I never had the type of passion for it like my brothers.”

There was never a question as to what Floyd Jr. was going to become. Floyd Sr. groomed his son to be a boxer from the cradle.

“He was raised like he was in a communist country, where you pick a child and say this is what you’re going to do for the rest of your life,” Jeff said. “His dad loved boxing so much that he said this is what my son is going to do.”

Floyd Jr. was a boxing prodigy but it took more than genetics to make him the superstar he is today. He craved the attention of his father, who lavished it on him when he was training him. He adored adulation, which he received by succeeding in the ring. And he loved being rewarded, which came in the forms of trophies and championships as an amateur and money once he turned pro.

DNA, a demanding father and kid with an unrelenting work ethic is a potent cocktail for success. 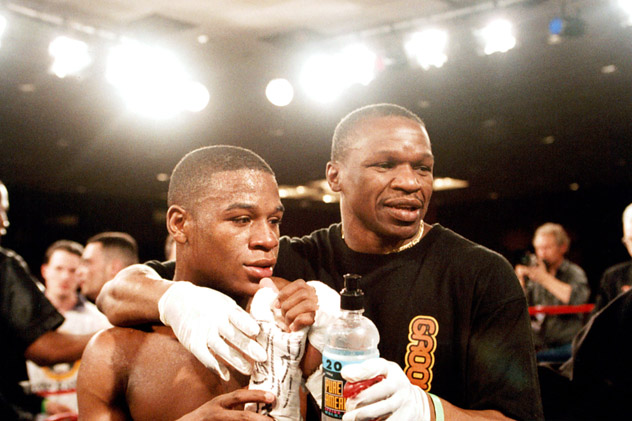 “Take anyone of those things out of the equation and he doesn’t make it,” said David Mayo, a Grand Rapids reporter who has covered the Mayweather family since Floyd Jr.’s amateur years.

Mayo said you didn’t even need a trained eye to see that Floyd Jr. was going to be the best Mayweather to ever strap on a pair of gloves. Mayo covered a National Golden Gloves tournament in Arkansas when Floyd Jr. was 16. He had just moved up from the juniors and had never fought in the open class. It didn’t matter: He won the championship.

“He wiped out five grown men. Right then I thought Olympic gold medals and several world championships were in his future,” Mayo said. “But I never thought he’d become one of the biggest money earners in the sport and reach the level that he has now.”

There were other cousins around at the same time as Floyd Jr., but Floyd Sr., Roger and Jeff weren’t interested in grooming them to be future world champions. Big Floyd threw all of his energies into training his son.

“I would never train nobody else when I was training him. He was my son,” Floyd Sr. said.

Jeff Mayweather said their late brother, Theartha, had a son named Theartha Jr. who boxed briefly. But he was not trained by any of the other brothers.

“He was gifted. He left the amateurs undefeated,” Jeff Mayweather said. “But he was a street kid. He smoked and drank and liked to party. It took his mind off boxing and he never pursued it.”

Floyd Sr. is training another “Mayweather” now: Justin Mayweather Jones, a 27-year-old who is his son from a relationship outside of his marriage to Floyd Jr.’s mother. Jones knocked out his only pro opponent so far but, DNA notwithstanding, it doesn’t seem likely he’ll extend the dynasty. By the time he was 27 years old, Floyd Jr. was 32-0 and had won world titles in two different weight classes.

Floyd Jr. has four children, two sons and two daughters, and none of them appear to be heading for ring careers, according to Uncle Jeff.

“Floyd’s kids aren’t going to box. They’re too rich. They don’t have to. One of his sons wants to play football and one wants to play basketball,” he said. 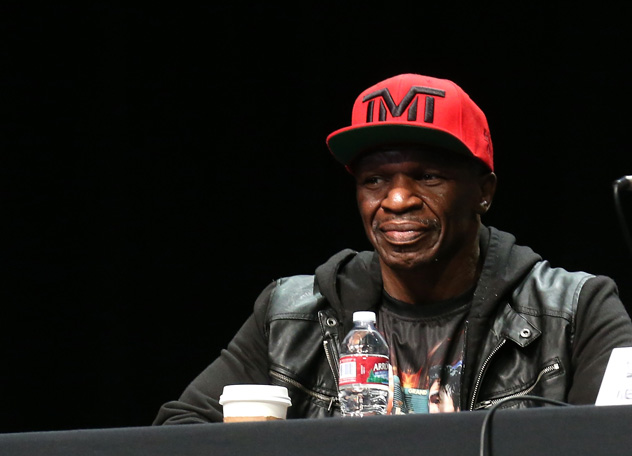 That will leave it to someone else. The brightest prospect at this point is Roger’s son, Lehkei, an 8-year-old prodigy who reminds some of his famous cousin and has world-class trainers in his family. Jeff said Lehkei used to run around the house when he was 2 years old, throwing punches at the couch and the stove. Mayo recalls seeing him in the gym at around the same time.

“He threw combinations with a purpose,” Mayo said. “So you may not have heard of the last great Mayweather.”

Said Jeff: “It would be ideal for him to be the next one. But he’s also a kid who likes to do other things.”

More than likely the Mayweather dynasty will come to a close when Floyd Jr. hangs up the gloves.

“I think [a fighter like] Floyd only comes around every 100 years. They don’t come every day,” Floyd Sr. said. “I thought I was the s–t back in the day. He’s accomplished more things than I did, but everything he’s doing he did it through me anyway.”

FLOYD MAYWEATHER SR.
Pro record: 28-6-1, 17 KOs
Active: 1974-90
Career highlights: Was stopped by Ray Leonard in 10 rounds in 1978 but won praise from Leonard for his ability. Was THE RING’s No. 6 welterweight at the time. … Lost two decisions to Marlon Starling. … Never fought for a world title. … Spent five years in prison for drug trafficking. … Has trained many top fighters, including his son (Floyd Mayweather Jr.), Oscar De La Hoya, Chad Dawson and Ricky Hatton. 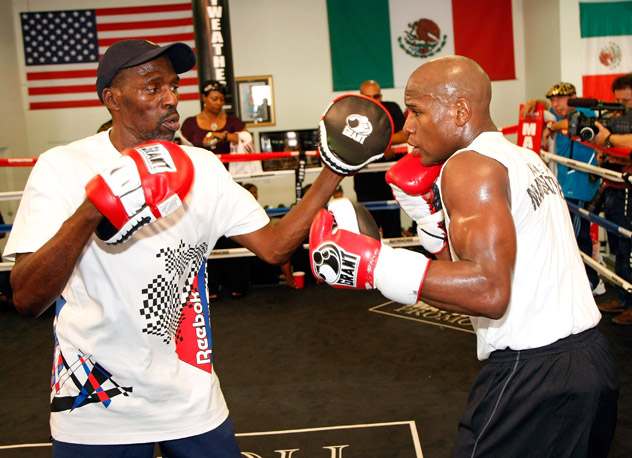 FLOYD MAYWEATHER JR.
Pro record: 46-0, 26 KOs
Active: 1996-present
Career highlights: Is recognized as the best fighter in the world pound for pound. … Has won 15 world titles (including four RING championships) in five weight divisions. Currently holds THE RING junior middleweight and welterweight titles. … Is 23-0 in world title fights. … Hasn’t lost a fight since a controversial decision in the semifinals of the 1996 Olympics.