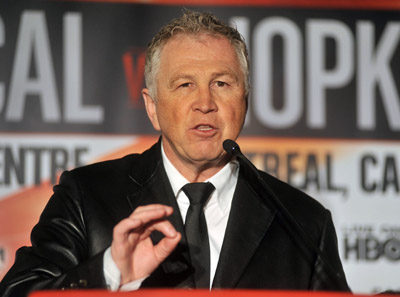 Aside from next weekend’s Floyd Mayweather-Manny Pacquiao superfight, it could be argued that the fight most people want to see is a light heavyweight showdown between Adonis Stevenson and Sergey Kovalev for all the marbles.

The fight has been talked about since the summer of 2013 when both fighters won world titles within a couple of months of each other. Stevenson announced himself on the world stage when he caused an upset, drilling Chad Dawson in a single round to claim the RING Magazine and WBC straps; while Kovalev traveled to Wales and stopped Nathan Cleverly for the WBO title.

In November 2013, both appeared on the same card against ranked contenders, and again both impressively took care of business. They seemed primed to meet.

However, in 2014 things got complicated.

“When we moved from HBO to Showtime it was because at the time the guy to beat in the division was Bernard Hopkins,” Yvon Michel, Stevenson’s promoter, told RingTV.com on Wednesday. “He had the prestige, he was a world champion; Stevenson-Hopkins would have made a great event here in Montreal at that time.

“Even if Stevenson had beat Kovalev [at that time] it would have been just a regular fight; nobody knew who Kovalev was. A win over Kovalev at that time wouldn’t have improved Stevenson’s position. So we made that move to go for a Hopkins fight and finally Hopkins decided to go in Kovalev’s direction. It was out of our control.”

Kovalev went on to beat Hopkins with a surprisingly masterful display of boxing and added the WBA and IBF titles to his collection.

Last December at the WBC annual convention, Main Events (Kovalev’s promoter) made a power play to force a fight between Stevenson and their man.

“It was a great move by Kathy Duva and Main Events to go to the WBC and ask for Kovalev to become the mandatory contender for Adonis Stevenson,” acknowledged Michel. “That was going to solve the problem; we don’t have the greatest relationship [with Main Events] because of the lawsuit that they launched against us. They did that to hurt our reputation, so we didn’t get along very good. So sitting with them to come to an agreement at that time was not likely.

“So when they made that move, when we were informed, we were happy because we said to ourselves, ‘We don’t need to negotiate and the group that believes in the value of the fight the most will do it.‘ They were backed by HBO and on our side we had PBC and Showtime with Al Haymon. We prepared the best bid that was possible to have with the resources we have.

“I believe at that time they made the request of a purse bid because they believed they were going to win a purse bid if we weren’t going to negotiate [the fight]. But since the launch of PBC and the resources we have on our side now they didn’t believe anymore that they were going to win a purse bid and they re-signed with HBO without having confirmation that HBO would let them fight on Showtime or in a PBC event if they lost the bid.

“They put themselves in a position where really it was a difficult task to do a fight between Stevenson and Kovalev.” 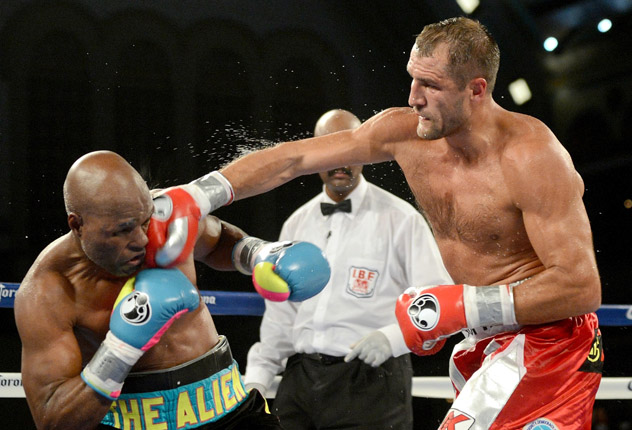 Sergey Kovalev (R) on his way to taking the IBF and WBA light heavyweight titles from Bernard Hopkins on Nov. 8, 2014. Photo by Naoki Fukuda.

Michel says he received a letter from Duva, though hasn’t as yet responded. The letter asks for both parties to meet with HBO in an attempt to make the fight.

He isn’t writing off the possibility of brokering a deal with Main Events.

“We want to do the fight but we want to make sure we will be with the television [network] that will believe in that fight the most and then will be willing to put the most money behind the fight,” he said. “If it is HBO we don’t have a problem seeing what they can offer and what sort of investment they can come up with and how it compares with what we have on our side.”

So what does it all mean for the possibility of the fight ever taking place?

“I believe that fight will happen,” Michel said. “I don’t believe it will be as soon as we thought. We thought it was going to be early fall. It might be early 2016 but the move they have done will delay it for sure. 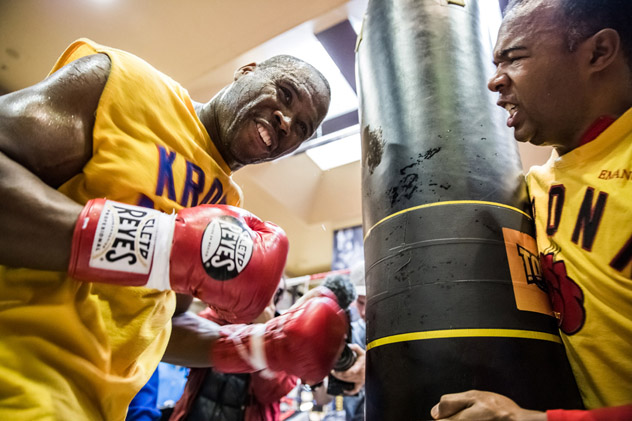 “Adonis wants to fight him. We have to find some compromise somewhere; we’re willing to do some. We’re willing to negotiate with Kathy Duva and hopefully we find a solution down the road.

“I believe Stevenson-Kovalev is the best fight we can see in boxing besides a Mayweather-Pacquiao fight. Two huge punchers, they are antagonistic to each other. I think it’s probably the most anticipated fight in the light heavyweight division since Spinks-Qawi in the early 1980s. The fight has to happen; it’s a huge, huge fight. Hopefully we’ll find a way that everybody will co-operate and do it.”

Michel also had something to say about the rhetoric surrounding the failed negotiations.

“They tried to make everyone think Adonis is scared of Kovalev. I don’t believe anybody is scared of anybody. They are fighters, they have pride, they have egos, they’re strong.

“I don’t believe Kovalev is scared like Adonis has never been scared. They were simply concerned of not winning the bid and looking bad because if they didn’t have the blessing of HBO to fight Stevenson and the fight went to another network.”

Where does the recent developments leave Stevenson’s immediate plans?

“We’re looking at the possibility of a June 27 fight in Montreal, it’s not set in stone but it’s a possibility,” explained Michel. “[Then] we’re looking to do a title defense [in Haiti, Stevenson place of birth], definitely in 2015, probably in September.”

Aside from Stevenson, Michel is very high on another of his 175-pound clients, and this time it is him who is in the corner of a heavy-handed Russian, Artur Beterbiev.

“He is the future of the division,” said Michel. “He is great in every aspect of professional boxing. His behavior, his determination to improve, his athletic capacity, his boxing I.Q. His speed, power, he has every tool and every quality you request from a fighter to become not only a champion but to become a great, to achieve great performances in the ring.

“In his case it’s a little complicated because all the belts belong to two fighters. It’s just a question of opportunity for Artur Beterbiev.”

Beterbiev will fight either in Brooklyn on May 29 or the week after; that is currently being finalized.

Like Main Events, Michel is heavily invested in the light heavyweight market.

“We have another light heavyweight who is waiting his turn too, Eleider Alvarez, the No. 2 with the WBC. He is also exceptional. Having these three in the same stable is amazing. He will also be fighting the end of May, beginning of June. He is also a fighter that will make a lot of noise in the division.”