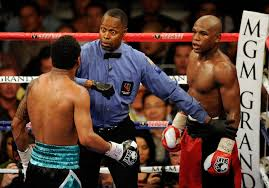 Kenny Bayless has been appointed to referee the Floyd Mayweather Jr.-Manny Pacquiao fight on May 2 at the MGM Grand in Las Vegas. The decision was announced at a hearing of the Nevada State Athletic Commission on Wednesday morning.

Bayless, 64, has officiated over 100 world title fights since being appointed as a professional boxing referee in 1991. The Berkeley, California native, known for his “What I say you must obey” catchphrase, has been the third man for a number of both fighters’ fights, including Pacquiao’s second and fourth fights with Juan Manuel Marquez, as well as his victories over Ricky Hatton and Miguel Cotto.

Three American judges will decide the outcome should the fight complete the twelve round distance or end in a technical decision. Burt Clements and Dave Moretti of Nevada were selected along with Glenn Feldman of Connecticut.

Clements was the official who scored the first Pacquiao vs Marquez fight in 2004 a draw, turning in a 113-113 card. Clements scored the first round 10-7 instead of 10-6 like the other two judges despite Pacquiao scoring three knockdowns. He told the Las Vegas Review Journal afterwards that he made an error, resulting in a draw.

“I just screwed up. I feel badly because I dropped the ball, plainly and simply,” Clements was quoted as saying.

In a formality, Mayweather was granted a boxing license by a 5-0 unanimous vote.