Floyd Mayweather Jr.: That’s how he (shoulder) rolls: From THE RING Magazine 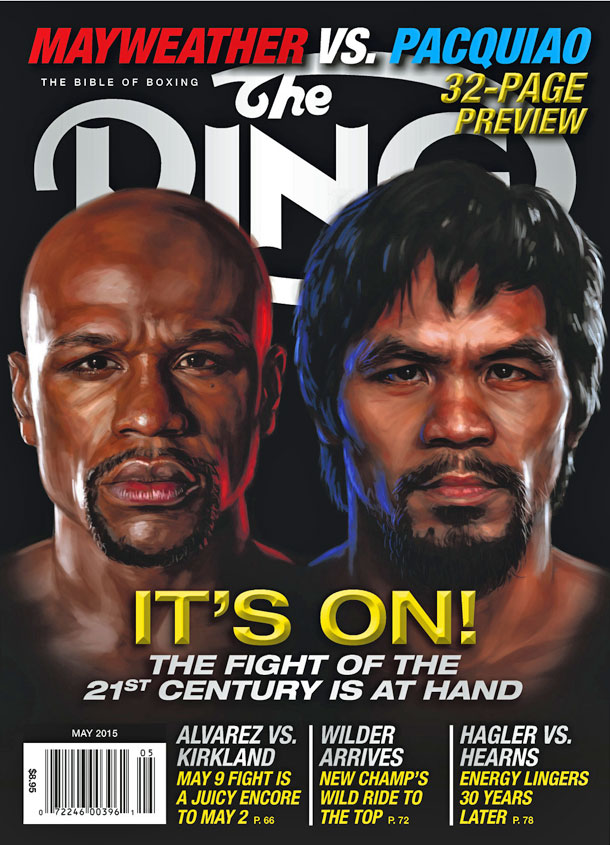 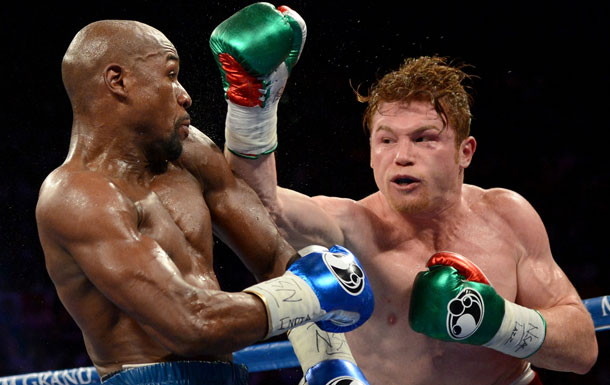 Canelo Alvarez was frustrated by the shoulder roll in 2013. Photo / Naoki Fukuda

This is the second in a series of stories on Floyd Mayweather Jr. and/or Manny Pacquiao that appeared in THE RING Magazine in recent years. This particular story on Mayweather, written by Bernard Fernandez, originally was published in the June 2014 issue. The current issue — previewing the May 2 fight — is on newsstands now. Don’t know where to find a newsstand near you that sells it? Click here. To subscribe ÔÇö both to the print and digital versions ÔÇö click here. You can also purchase the current issue on that page.

They say that imitation is the sincerest form of flattery, but there is nothing quite like true originals. Larry Donald and the late Greg Page were pretty good heavyweights, but their paint-by-numbers attempts to duplicate the distinctive style of their idol, Muhammad Ali, often came across as strained and kind of sad.

Like “The Greatest,” whose repertoire included such distinguishing features as the Ali Shuffle and the Rope-a-Dope, Floyd Mayweather Jr. is widely known for what might be described as a signature move. Mayweather’s shoulder roll had been employed by any number of predecessors, including his own father, before today’s finest pound-for-pound fighter came along and raised the bar. It has been tried out by any number of more recent fighters hoping to tear a page from Floyd Jr.’s playbook and use it as a crib sheet for their own in-ring exams. But the overriding opinion of boxing experts is that it’s always talent that makes a great fighter’s pet move work, not the move that makes a fighter great.

As Mayweather (45-0, 26 KOs) nears the May 3 defense of his RING, WBC and WBA welterweight titles against Marcos Madaina (35-3, 31 KOs) at Las Vegas’ MGM Grand, five sharp-eyed observers of “Money’s” career gave their thoughts on his exquisite use of the shoulder roll. The panelists include:

So, guys, what makes Mayweather’s shoulder roll so effective, and what can Maidana – who twice knocked down a would-be Mayweather clone, Adrien Broner, en route to winning a unanimous decision on Dec. 14 – expect when he faces the master of the move instead of a mere imitator?

“The shoulder roll is a technique that I associate with the Midwestern area, the Michigan area. James Toney [who is originally from Ann Arbor, Mich., a two-hour drive from Floyd Jr.’s native Grand Rapids] had a really good shoulder roll, though he rolled in a different way. He didn’t necessarily stand up taller than Floyd, but he quite literally rolled away from punches. Sometimes Toney would give you a slight roll when you threw a right hand because he wanted to counter with his own right. Sometimes he rolled a little more, which was even more of a defensive move.

“You can use that move in different ways. If you look back at Floyd Mayweather Sr.’s fights, he used it a lot. You can see him use it pretty frequently in his fight with Sugar Ray Leonard, which I think is still available on YouTube. Obviously, he wasn’t as good at it as Floyd Jr. is now, but you see where his son got it from. Roger Mayweather [Floyd Jr.’s uncle and his former trainer] used it a bit, too, but his style was slightly different. Roger was more offense-minded.

“The point I’m trying to make is that Floyd got that move almost from birth. That’s the difference between him and guys who try to emulate him. Yeah, some fighters do well with it in spots. You can borrow bits and pieces from other fighters. That can be a good thing. But if you try to copy someone’s complete style, I’ve never seen that work. Floyd Jr. began mastering the shoulder roll from the get-go. It’s who he is; by now it comes naturally to him.

“There’s actually a lot more to it than meets the eye. You have to have the nerve to stand in the pocket against another fighter trying to knock your head off. You have to have the timing to react at exactly the right moment. If you mis-time your reaction by a millisecond, that’s the difference between rolling to get away from a punch and getting nailed hard. It took years and years of Floyd Jr. perfecting his craft in the gym that got him to where he is now.”

“Floyd’s shoulder roll is about perfect timing, perfect rhythm, perfect feel. It’s all those ingredients that allow him to be as impenetrable as he’s appeared to be for so many years. The only possible flaw I could possibly see in his makeup is if he one day enters the ring, and he’s not as focused. I haven’t seen that yet, and he’s what, 37? That kind of focus really impresses me because there’s so much going on within his circle – some good stuff, some not-so-good. Me, at that age, I had too much crap on my mind. But when Floyd’s in the ring, it’s all there – body, mind, everything.

“I remember when I fought Floyd Sr., who also had a pretty good shoulder roll. It wasn’t easy to penetrate. The son has taken some of that from his father and improved upon it. I don’t know, maybe it’s his exceptional peripheral vision, but when he tucks his chin and rolls, it’s like a turtle going into his shell.

“I’ve reviewed tapes of Floyd Sr. and Floyd Jr. and without question, there’s an incredible similarity. If there’s a difference, it’s that Floyd Jr. is so effective countering off it, and hurting his opponent. When he fought that Canelo [Alvarez] kid, Canelo had to be thinking, `Where did he go? He was right there a second ago.’ Floyd made him miss, and he made him pay.

“Some very gifted fighters are able to get away with certain things that other guys can’t. Roy Jones was like that for a long time because he had such incredible hand speed and power. It was all feel, his ability to slip punches by the tiniest fraction of a second. Once your reflexes slow just a bit, though; that’s when you get in trouble.

“Mayweather is more fundamentally sound than Jones. He’s a real technician. I can’t believe some people don’t appreciate what this incredible fighter is doing. I love the way he breaks his man down. He lures him in and sets him up. Really, I can talk about Mayweather forever.”

“Mayweather knows when to use [the shoulder roll] and when not to. He doesn’t depend only on that. It’s just an element within his body of work. I think it’s the other parts that also go into the sum of who and what he is. It’s the other parts that allow him to be effective. He has quick hands, he can fight in the center of the ring. He doesn’t have to wait to lure you in so that he can counter. If you wait on him, his hand speed allows him to get off first. He showed that against Canelo. He doesn’t have to just wait on guys to walk in and then set traps for them.

“Because he doesn’t depend only on a particular style or a particular move, opponents can’t dissect him and say, ‘OK, this is what I’m going to attack.’ You have to find other vulnerabilities, and he doesn’t have many. The whole of Floyd Mayweather is greater than the individual parts. When you fight him, you can’t concentrate on one piece of the puzzle.

“Broner, who tries to emulate Floyd, is a good example of that. He hadn’t fought anybody on the level of Maidana, somebody he couldn’t intimidate with his speed and some of the other physical abilities that he has. Maidana wasn’t halfway defeated heading into the fight, and you saw what happened. Broner [who was knocked down twice by Maidana en route to losing a unanimous decision] was overly dependent on that move. He thought he could depend on it to a greater extent than he should have.

“Floyd doesn’t pigeonhole himself in that way. He has other things to go to, and that’s what makes him so effective. When he goes to the shoulder roll, it almost seems as if it’s something new and unique. You watch him execute it like he does, and it’s seems like you’re seeing it for the first time.

“Where Broner went wrong was having a psychological attachment to a great fighter’s most notable move. But true originals find a constancy in something. Imitators are only hoping to find that. They don’t have complete assurance it will bring them to that next level. Mayweather’s already at that level.”

“You block punches off of your reflexes. It’s Floyd’s reflexes that make him who he is rather than the shoulder roll. Yes, he does roll his shoulder as a defensive move and to put him in a position to counterpunch, but the move won’t work like it does for him if the reflexes aren’t there.

“I seen Broner, who’s young and has good reflexes, try to use the Floyd shoulder roll and Maidana just nailed him. What does that prove? That if you think you can get the shoulder roll down first and build off that, you’re a fool. Superior reflexes, not just good or above-average reflexes, make the move work. Floyd has those superior reflexes. He’s able to anticipate a punch before you even think about throwing it. And when you do throw it, it’s late. He rolls, lets the punch deflect off the side of his body and he counters.

“I know the shoulder roll is a big part of Floyd’s arsenal, but every fighter is not comfortable with it or capable of executing it properly. Trying it and doing it right are not the same thing. Like I said, Broner kept trying it, and he got his ass kicked. It seems like a simple move, but it requires really precise timing. It requires anticipation. You hear people say, ‘It’s the roll, it’s the roll,’ like that’s all there is to Floyd. No! The roll ain’t it. It’s the reflexes, it’s the anticipation. The roll comes after the other guy commits to a punch. If he doesn’t commit, why would Floyd roll?”

“The shoulder roll is basically a defensive move. If you throw a right hand at Floyd, he tucks his chin behind his left shoulder, turns to his right and is in good position to counter. A lot of fighters do that. But Floyd does it to perfection because he’s been doing it for so long, and he does it so exceptionally well. Really, it’s not the move that makes Floyd such a great fighter. It’s his talent level.

“The shoulder roll is a hard move for the other guy to counteract or neutralize if it’s done right. Floyd does it about as well as anyone I’ve seen. He’s trying to get you off-balance, and he usually succeeds. If you don’t do it just so, it can turn out pretty bad.

Floyd Mayweather Jr. is known as one of the best defensive fighters ever. CompuBox statistics bear that out. Boxers overall land 30 percent of the total punches they throw, according to Bob Canobbio of CompuBox. In his last 10 bouts, Mayweather’s opponents landed an average of 18.1 percent of their punches. Mayweather had a 42.3 percent connect rate. Here are the connect rates of Mayweather and his last 10 foes (in percentages):