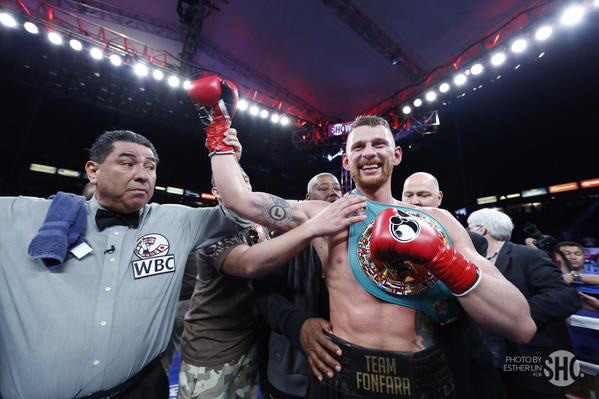 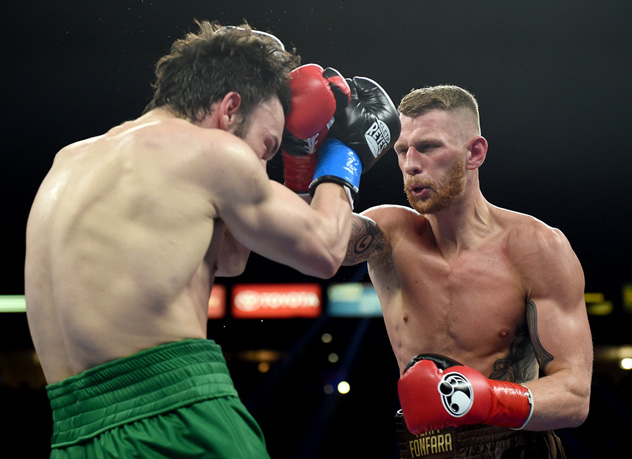 CARSON, Calif. – Was it the rust after a 13-month hiatus from boxing? Was Andrzej Fonfara too big and strong? Was the Pole just too good? Did an injured leg really play a role, as was claimed.

The reasons will be discussed in the coming days. All we know for sure is that Julio Cesar Chavez Jr. took a pummeling in a ninth-round stoppage on Saturday at StubHub Center and will have to rebuild.

The challenge Chavez faced was evident almost from the opening bell, as Fonfara immediately began pumping quick, hard punches at a high rate and connected with ease. Chavez, a warrior even if he has his limitations, battled throughout the fight but nothing changed significantly. He had no answer for Fonfara.

By the final round, his battered face was stark evidence that he had taken too many punishing blows. With less than a minute remaining, Fonfara punctuated his stunning performance with a big left that put Chavez on his butt and hurt him. He survived but, in effect, that was that.

Chavez apparently claimed to have a leg injury and asked trainer Joe Goossen to stop the fight between rounds. Doesn’t matter. Injury, horrible beat down. Chavez was finished.

It was a wipeout.

“I knew in the first round, when I hit him for the first time, that I was going to win,” Fonfara said. “He didn’t hit as hard as everyone said he did. I was a little surprised that he wouldn’t come out for the 10th round but he was cut, beat up and had just been knocked down. So he knew what would happen if he came out again.”

Chavez (48-2-1, 32 knockouts) hadn’t fought in 13 months, raising questions about possible ring rust. And, fighting above 170 pounds for only the second time (the fighters agreed to a catch weight of 172), he gave away his customary size and strength advantage.

No one imagined that Fonfara would be so much better than the son of Hall of Famer Julio Cesar Chavez Sr., though.

Fonfara obviously was much quicker than Chavez, who ate punch after punch from the outside. Chavez managed to do some damage – mostly to the body – when he got inside but that happened infrequently.

And while Chavez was hurt only by the knockdown punch – the result of a left hook – Fonfara apparently wasn’t hurt by any of his opponent’s punches.

Chavez’s fate seemed to be sealed about two thirds into the fight, when Fonfara’s punches began to add up, the loser’s face became more and more swollen and he began to tire. The knockdown – the first in Chavez’s career – gave his corner a final reason to stop the fight and he was saved from further punishment.

“I stopped the fight. It was my decision. I didn’t like what I saw,” the trainer said.

Those who came to support Chavez obviously weren’t happy with the decision, regardless of who made it. After it was announced the fight had ended, some unruly fans, among the 8,636 present, hurled cups, plastic bottles and other objects toward the ring to express their displeasure that they were cheated out of three more rounds.

They obviously didn’t have Chavez’s welfare in mind. It’s a good thing Goossen did.

Where does this leave Chavez, who had battled back from a one-sided decision loss to Sergio Martinez by twice beating Brian Vera only to step away from boxing for more than a year because of promotional issues?

And then this devastating setback. It will be difficult to bounce back.

“Maybe 172 pounds was too big for me,” Chavez said. “Maybe I’ll go down [to super middleweight]. I’m not sure what my future will be. I congratulate Fonfara. It was a tough fight, he’s a tough fighter.”

The full-fledged 175-pound contender demonstrated that he can compete with the best in his weight class when he gave RING champion Adonis Stevenson all he could handle in a decision loss in 2012. That followed notable victories over veterans Glen Johnson and Gabriel Campillo.

Fonfara’s performance on Saturday – a dominating victory over a big-name opponent who had never even tasted the canvas – puts him in a very strong position.