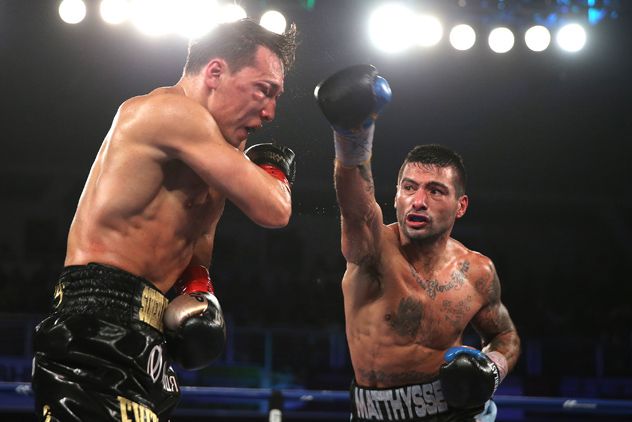 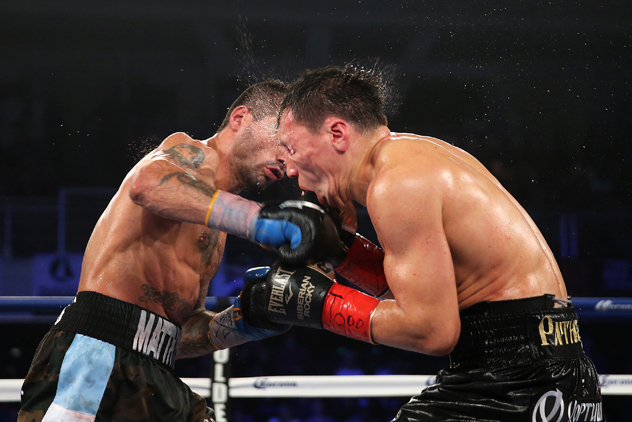 VERONA, New York – There was almost a hint of a grin on Lucas Matthysse’s usually stoic face as his hands worked independently, pounding away and snapping back Ruslan Provodnikov’s head in the latter stages of Round 6 with thudding right uppercuts that seemed to connect every time he threw it on Saturday at the Turning Stone Resort Casino.

A fight that on paper seemed to be an anachronism, more suited to a bygone era shown on a 19-inch mahogany black-and-white Sylvania Chassis turned into a living color Matthysse virtuoso performance.

The Argentinian used accurate punching, excellent spacing, a consistent jab and an effective uppercut in busting up Provodnikov in winning a 12-round junior welterweight majority decision.

Afterward, Provodnikov (24-4, 17 KOs) was all busted up. He had a gaping cut through his left eyelid. His right eye was bruised and swollen. But there was no questioning his otherworldly determination and courage to keep coming forward.

Punch stats bore out Matthysse’s dominance. He connected on a total of 327 out of 1,034 punches (32-percent), to Provodnikov’s 201-of-755 (27-percent). The 1,034 punches thrown and 327 connects was the most punches “The Machine” has thrown and landed in 16 fights CompuBox has tabulated for Matthysse.

Matthysse won with the jab.

“Ruslan is one tough fighter, he took everything that I threw at him,” Matthysse said. “I have a lot of respect for him. I’m ready to take on the next great fighter. I would like to take on the winner of (Floyd) Mayweather and Manny Pacquiao.”

A theme began early. The Machine started early to the body, and was landing pretty easily. He used distance exceptionally well, and even by the end of the first, the both sides of Provodnikov’s face began to turn red. In the second, an accidental headbutt opened a gaping cut over Provodnikov’s left eye. A steady red stream gradually turned into a river in the latter rounds.

Provodnikov’s trainer Marvin Somodio was close to stopping the bout.

“I just couldn’t watch him take that punishment,” Somodio, who took the place of Freddie Roach now that the hall of famer is busy preparing Manny Pacquiao for Floyd Mayweather Jr., told RingTV.com. “Matthysse is a very skilled fighter and he hit my guy a lot. I wanted to stop it.”

Still, “The Siberian Rocky” promised Somodio that he would do better and kept coming forward.

“I wanted to win the fight no matter what, I just fight hard to the end,” Provodnikov said. “He’s the hardest puncher that I fought. The only way I want a fight stopped is if I’m lying on my back.”

Oscar De La Hoya, Matthysse’s promoter, gave Provodnikov four rounds. But the Hall of Famer came away amazed at how much punishment the Russian was able to endure.

“Provodnikov is one of the greatest fighters with the biggest heart that I’ve seen in many years,” De La Hoya said. “We’re going to move on. It was a great fight. I believe Lucas Matthysse kept his poise, he kept using that jab, and that didn’t allow Provodnikov to come lunging in with his power punches. I’m sure people were expecting a little more action, but it goes to show you Matthysse’s boxing ability.”

In Round 5, it seemed like Matthysse had tiny razors on the tip of his gloves, seemingly opening up new cuts on Provonikov’s face with every blow. In Round 6, Matthysse once again was the superior fighter, refusing to jump into the phone booth Provodnikov wanted to put him in. But in the latter portion of the fight, The Siberian Rocky began wearing down The Machine. Matthysse’s work rate slowed, while Provodnikov kept coming forward, kept throwing punches.

If it would have been a 15-round fight, it may have been different.

On the undercard, undefeated middleweight Patrick Teixeira (25-0, 21 KOs) made easy work out of Ghana’s Patrick Allotey (30-2, 24 KOs), stopping him at 2:02 of the second round. It was Allotey’s second-straight loss, but it also appears that the Ghanaian had a manufactured record. He was 30-0 in Ghana, but 13 of those opponents were winless and at the time they faced Allotey his 30 victories came against fighters with a cumulative record of 94-137.

Eddie Gomez (18-1, 11 KOs) opened the evening with a fifth-round TKO in what was a scheduled 10-round junior middleweight over Jonathan Batista (14-6, 7 KOs).