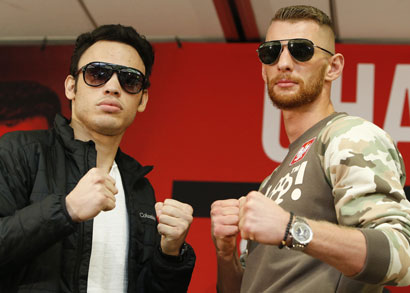 Andrzej Fonfara stopped Julio Cesar Chavez Jr. at the end of Round 9 to win a scheduled 12-round light heavyweight fight Saturday at StubHub Center.

Fonfara (27-3, 16 knockouts) picked apart Chavez (48-2-1, 32 KOs) from the beginning, using a stinging jab and multiple-punch combinations to win round after round and wear Chavez down. Chavez never stopped trying but took an increasingly bad beating as the fight progressed.

Fonfara put Chavez down with a big left late in the ninth round. The Mexican was able to recover but his corner decided to end matters after the round, which was a good call. He was taking too much punishment.

Imam, a wonderful boxer, was too quick and slick for the determined, but overmatched Castillo. The Nicaraguan was the aggressor throughout the fight but it was Imam — jabbing, firing hard, accurate power punches, fighting well defensively — that did most of the damage. Imam landed a remarkable 63 percent of his power punches (112 of 178) and outlanded Castillo overall 303-155.