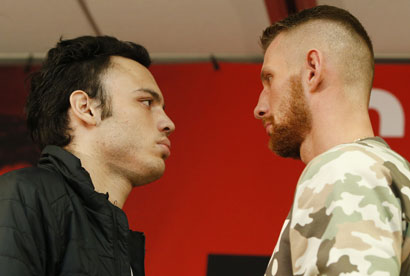 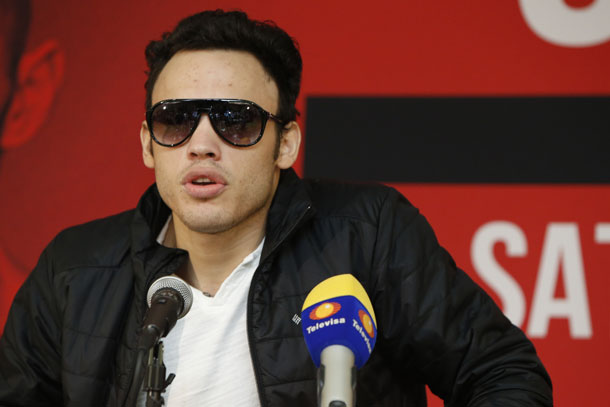 LOS ANGELES – Joe Goossen knew Julio Cesar Chavez Jr.’s reputation before agreeing to become his trainer recently. Partier. Not 100 percent dedicated to the sport. Maybe a bit lazy. All of it. Goossen wanted to see for himself, though. And, in the end, he liked what he saw.

The veteran trainer took Chavez and the Mexican light heavyweight’s entourage and set up a five-week camp in an isolated area in Lake Tahoe, on the California-Nevada border, where temperatures dipped to freezing when the sun went down.

One evening stands out Goossen’s mind.

“The temperature by the lake at nightfall got down to around 30 degrees with wind chill,” Goossen said at the final press conference to promote Chavez’s fight against Andrzej Fonfara on Saturday in Carson, California. “One night he wanted the whole team to work out in the sand on the lake. The cold was so biting that my teeth were chattering.

“We were a few feet from the shoreline, 30 degrees, the wind blowing. Everyone was freezing. And this kid is just barreling through his workout, hitting the mitts, shadow boxing, everything. This went on for two hours. I wanted to go sit in the car and turn the heater on. That’s how torturous it was. I remember thinking, ‘This is one bad dude.’ I told him that night, “You won the fight tonight.” 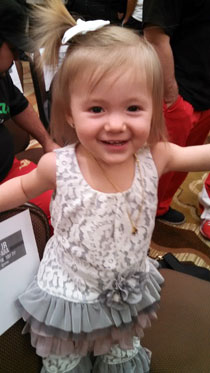 Goossen has known the Chavez family since Junior was a child, which is one reason they turned to him when they were looking for a new trainer. He knows there is at least some truth to the rumors about the kid, now 29, who always liked the nightlife more than the gym life.

The fighter seemed to admit as much when he told THE RING, “The only problem was my time. I liked going out at night.”

That, Goossen said, makes his accomplishments all the more remarkable. Chavez (48-1-1, 32 knockouts) has been around boxing all his life but had no real amateur career and a questionable work ethic yet won the WBC middleweight title in 2012 and had three successful defenses.

Chavez lost his belt in 2012 to then-pound-for-pounder Sergio Martinez by a wide decision but almost scored a brutal knockout in the 12th and final round, after which the talented Argentine was never the same.

“I think even his father (Hall of Famer Julio Cesar Chavez Sr.) thought he’d fight a few times and call it quits,” Goossen said. “That shows you that even a father who knows his son was surprised at his determination. What drove that determination, only God knows. I just have to hand it to him.

“ÔÇª It’s amazing story how he climbed to the top of the mountain with his lack of experience. I guess you can say his first 20 fights were his amateur career. He fought the right guys at that time. Then, after that, he started to fight some tough opponents and started to really prove himself.”

Of course, Chavez hasn’t relied solely on determination. He is known to have inherited two indispensable assets from his great father: The ability to take a punch and punish his opponents with debilitating body shots.

Goossen learned about the second asset shortly after camp started.

“I hold a [body protector], let’s call it a cushion, when I’m working with a fighter,” he said. “I’ve been holding it for 45 years and many fighters have hit me on it. I can say honestly that only one guy hit me harder when I had that cushion around my waist and that guy weighed 275 pounds and was 6-foot-8.

“The second most powerful punch the body I’ve ever felt was from this guy here.”

Big, strong. That’s the Chavez we’ve come to know. The difference now might be an added sense of urgency.

Chavez hasn’t fought since he outpointed Brian Vera in March of last year as a result of promotional issues. He said he’s excited to get back into the ring. And a new person in his life – 1-year-old daughter Julia – has forced him to reevaluate his approach to his career.

“I’m more focused now because of my daughter,” Chavez said in solid English. “I’m definitely different. And Joe motivates me every day. I like him very much. I feel good.”

Said Goossen: “I gotta tell you. He’s pushing 30 now. He has a little baby girl, who is just darling. He has his fianc├® Frida, a wonderful lady. Sometimes your mind just clicks. You come out of childhood to manhood. I think that’s where he’s at now. He has a window here the next five, six years that he can capitalize on. All it takes is a little manly work.

“I think he’s left that childish stuff behind. I’m surprised that even with that working against him, he was able to become the middleweight champion of the world. That’s not easy to do, especially when you’re not doing things 100 percent. When you’re doing things 50, 60 percent and you still win a championship, there’s something special about you.

“I’m glad that it’s on my watch that he’s decided to turn the corner, to apply himself more diligently.”