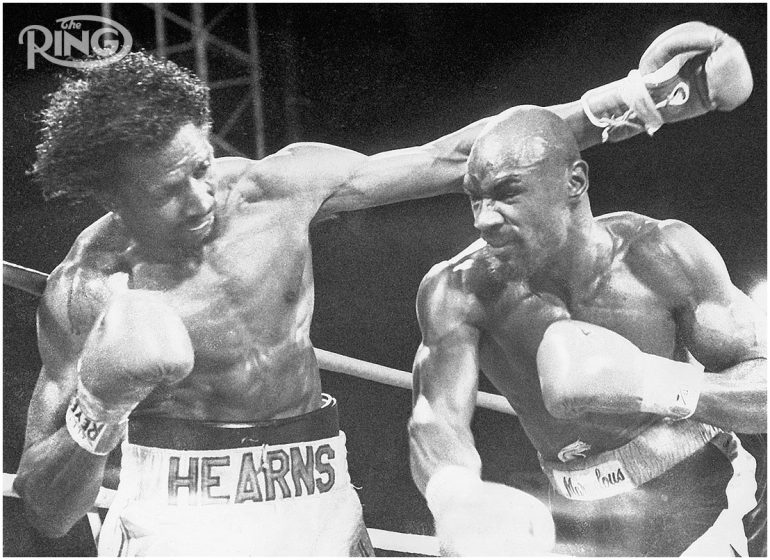 On Monday, April 15, 1985, Marvelous Marvin Hagler and Thomas “The Hitman” Hearns entered a temporary arena which had been erected outside Caesars Palace and the resulting collision, which lasted less than nine minutes, produced enough electricity to light up the Las Vegas Strip.

Rivalries in boxing are frequently connected to trilogies: Ali vs. Frazier, Leonard vs. Duran, Barrera vs. Morales or Gatti vs. Ward. Hagler defending his undisputed middleweight championship against the explosive Hearns was once in a lifetime sporting theatre and, ultimately, no sequel was required.

“I’d known of Tommy since he was an amateur,” Hagler, who was inducted in the International Boxing Hall of Fame in 1993, told RingTV.com. “He turned pro, won the welterweight title (WBA version against Pipino Cuevas) and was very dangerous with that big right hand. Still, back then, we didn’t think of him as a potential opponent because I was concentrating on the middleweight division.

“A couple of years later Tommy suddenly felt that he could whip me. We were due to fight somewhere in Michigan in 1982 but he hurt his baby pinky and pulled out. After that, Tommy started following me around when I was making title defenses. It took a few years but finally we got together and that was exciting because Tommy had won a lot of big fights.”

One of those big fights was a WBC junior middleweight title defense against Roberto Duran, which ended in a pulverizing second-round knockout. These days the terminal, kick from a mule, right hand that Hearns unloaded on the legendary Panamanian would have had the majority of junior middleweight and middleweight champions running for the hills. Hagler, who had outpointed Duran seven months before Hearns knocked him cold, was not one bit fazed and couldn’t wait to silence his rival.

“I’d beaten up on Roberto Duran and you must understand, when I’m finished with a fighter they are never the same,” Hagler said. “Duran had been through a tough 15-round fight against me and took that fight with Hearns too early. I think I done Tommy a big favor by softening up Duran for him.”

When the opening bell sounded for Hagler versus Hearns, the challenger landed the rocket right hand almost immediately. The middleweight king, immune to pain, paused momentarily and then flew for the challenger’s throat like a devil dog.

Both gladiators were representing proud boxing cities; Hearns was swinging his punches from Detroit, Michigan, and Hagler from Brockton, Massachusetts.

In the space of three minutes, 165 punches were thrown. According to HBO, Hagler had connected on 50 of 82, Hearns on 56 of 83. The most vital factor, however, was that the defending champion was now walking through the Hearns right hand, which was actually broken during one of the exchanges.

“People talk about Tommy’s right hand but the hardest punch I ever took was from my mother,” Hagler said before releasing an infectious laugh. “Seriously, Tommy got through with a great right hand but that was good because I wanted him to be confident with that shot.

“Our solution was to come under the straight punches, get inside, and go to work. It wasn’t easy but the strategy was perfect. I was also cut in Round 1, maybe I hit my head on Tommy’s cup, but I felt no pain. I knew that eventually I would wear him down and he belonged to me. I ate up his right hands like Pac-Man.

“I had prepared myself for battle and my body was like armor.”

Hagler was indeed impregnable but the cut on the middle of his forehead was now a target for the slashing punches of “The Hitman”. The champion had won the first round on two of the three official scorecards, seemed to be on the ascendency in the second, but was pouring blood in Round 3 when referee Richard Steele intervened and took him to the ring doctor.

“I didn’t trust the referee from very early on in that fight,” said Hagler with disdain. “Steele knew that I had to get inside, because I’m the shorter guy, but he kept stepping in and would push me three feet back. I thought that was unfair because it gave Tommy more time and more room.

“I got nothing easy in my career and the only way to beat me was to steal it. I had to go to work on Tommy and end it there and then. I see my own blood – now you die!”

This killer instinct was born of frustration. In Hagler’s mind, he was never given enough respect and now he wanted Hearns’ head on a platter. The champion’s ambidextrous style had given “The Hitman” real problems from the start and it was almost fitting that the decisive finish was set up from a southpaw to orthodox switch.

Hagler said, “I never know whether I’m righty or lefty anyway. It’s a natural ability from God and when Tommy tried to escape off the ropes I got him with a big right hand from the right handed side. I got him and that’s all that I wanted to do was get the job done.

“I’m also happy that the referee didn’t let the fight go because nobody wants to see someone get hurt inside the ring. Fortunately, both of us got out of that fight without any serious injuries. In the heat of a battle like that bad things can happen and I’m glad Tommy was okay.”

There was no denying “The Marvelous One” when the fight was waved off at 1:52 of Round 3. All remaining critics crawled under the nearest rock and Hagler’s reputation as an all-time great middleweight was no longer a subject for debate.

“Larry Merchant at HBO would never give me the credit I was due,” Hagler said. “He would say I wasn’t a great champion because I hadn’t proved myself. After I knocked out Tommy I walked over to Larry and said ‘Okay, am I great or what?’ He said, ‘Well Marvelous, I can really say that you are a great champion.’ I said, thank you Larry, it’s about time.

“It was the highlight of my career and I do give Tommy credit for being the man he was that night. It takes two to tango and both of us made our mark in the history books. I speak to people all the time who say, champ I have the Hearns fight on my cellphone. I personally can’t believe it’s been 30 years, it all seems like yesterday.”

Hearns visited Hagler in his dressing room after the fight and acknowledged that he was beaten by the better man, and the mutual admiration between these two incredible prizefighters continues to endure to this day.

“I still see Tommy and we’ve done a lot of charity work together,” said Hagler, who resides in Milan, Italy. “He gives me the respect that I wanted from the beginning but in 1985 I wanted to smash his face. That’s the boxing game though and we needed that hate so we could put more wood in the fire.

“The bad blood brought out the best in us .We’d promoted the fight over 26 days and during that time there was a lot of animosity. I had to see Tommy’s face every single day and the way that I put it was; this fight is going to be war. And that’s exactly what it was – War!

Almost four years ago, this reporter interviewed another great former middleweight champion by the name of Bernard Hopkins. When asked who he thought were the top three middleweights in boxing history he humbly stated: Sugar Ray Robinson, Marvelous Marvin Hagler and Carlos Monzon.

“I would say exactly the same,” laughed Hagler, when told of Hopkins’ top three at 160 pounds. “Outside of the middleweight division I believe Muhammad Ali is the greatest fighter of all time but after that it’s Sugar Ray Robinson.”

It’s amazing to think that Hagler only fought twice more following his career defining victory against Hearns. He scored an 11th round knockout of John Mugabi the following year and his final bout was a controversial split decision loss to career nemesis Sugar Ray Leonard, on April 6, 1987.

“The Marvelous One” had a final tally of 62-3-2 (52 knockouts) and the middleweight division has never been the same since he left it.