Rocky Martinez looks toward the future 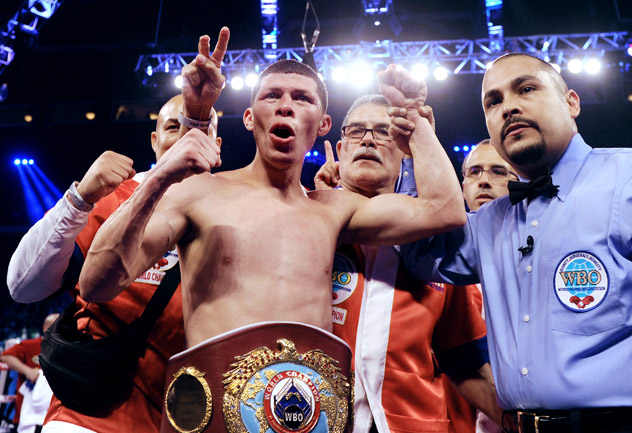 For many years, the rivalry between Puerto Rico and Mexico has been one of the best, most storied in boxing. The two proud nations once again resumed hostilities on Saturday.

Salido is well-known for packing on additional weight following the weigh-ins. Although both fighters came inside the division limit of 130-pounds, Martinez actually rehydrated to 144-pounds on fight night.

Salido’s record on the Island and against Puerto Ricans is well documented and added extra spice to the event.

“It is very important,” explained Martinez. “because it was here in Puerto Rico and because Salido had beaten not only ‘JuanMa’ [Lopez] but other Puerto Ricans and I had to stop that streak.

“I got what I wanted, which was to be crowned for the third time in the same weight. Better yet, I won this title in my home [country]. It means a lot to me because I always said I would win this belt in Puerto Rico and I did. [This is] another world title for my people in Puerto Rico.”

“We are very pleased with the event, and that many people came to the Coliseum [Coliseo Jose Miguel Agrelot, San Juan] and the fight was spectacular, as they could see on TV too,” Rivera said. “And most importantly, Rocky won the fight and was crowned [champion] again. I think Rocky won one of the best fights of his career; [he] fought [a] very smart [fight].

“It was a great night of boxing in Puerto Rico and the return of world championship boxing to the Island.”

Despite stiff competition from the NBC card headlined by Danny Garcia [of Puerto Rican descent] vs. Lamont Peterson and a price tag of $39.99 in the US, Rivera is optimistic that the promotion was a success: “Early [indicators] we have is that it was good. Everyone in Puerto Rico is talking about the fight between Rocky and Salido, so we expect good things about the pay-per-view.”

It’s still early days but the fighter and promoter seem to be in unison and are willing to explore all the options that present themselves.

“We will talk with my company to see what’s next. I was going up to 135 pounds and got this opportunity against Salido,” Martinez said . “So possibly we’ll stay for a defense at this weight and then [move] up to 135. But it all depends on the business that comes.”

“We are open to business opportunities,” explained Rivera. “If any network like HBO or Showtime or some important event gives us an offer to fight and the offer is good for Rocky, he can fight with any opponent. Rocky can fight at either 130 or 135 pounds, if the offer is good.”