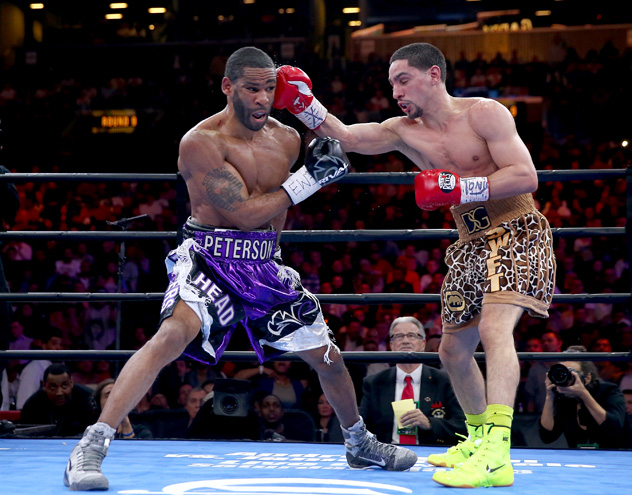 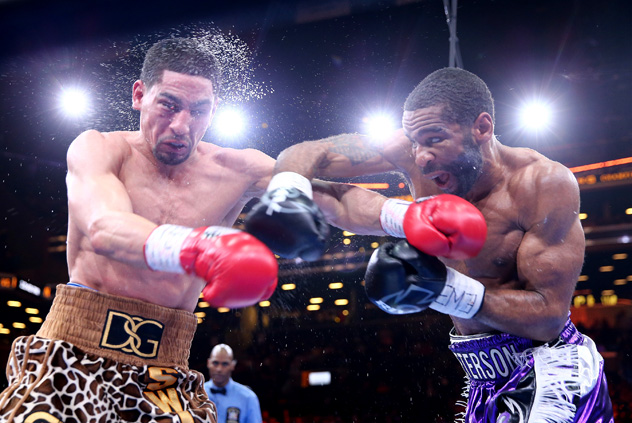 BROOKLYN – The eyes of the father never leave the son. They can go through him like razors, like his searing words each time he returns to the corner. When Angel Garcia tells his son Danny to stop playingÔÇöthen it’s time to get to work. “Swift” had his fun in the fourth round against Lamont Peterson Saturday night, stopping in the middle of the round and imploring Peterson to come forward, and again in the 10th when Garcia did an “Ali shuffle.”

With his right eye swollen shut, his dad in his ear, and an unwilling opponent in Peterson, who was more content on bouncing around than fighting during the first half of the bout, Garcia won a majority decision by scores of 115-113 on the scorecards of judges Kevin Morgan and Steve Weisfeld, while judge Don Ackerman had it a 114-114 draw at Barclays Center.

Garcia (30-0, 17 knockouts) last lost eight years ago, when he dropped a 23-14 four-round decision to Jeremy Bryan, of Clifton, N.J. at the U.S. Olympic Boxing Team Trials on Aug. 17, 2007. This came close to that feeling again. Peterson’s movement not only frustrated Garcia but had him thinking he didn’t do enough to win.

Part of that could have been due to the energy Garcia has been expending to make weight. Swift finally admitted his days as a junior welterweight are over. In recent years, it had been increasingly difficult for the 27 year old to get down to 140. He fought Peterson at a catchweight of 143. Garcia is walking away from the WBC, WBA and RING magazine junior welterweight belts.

“That was a war, that’s what fans want to see,” Garcia said. “Peterson stuck to his game plan and moved a lot. He did a good job and I did a good job. I feel great. I was really prepared. I saw it was getting a little edgy in the middle there. I thought it was close. I’m not going to lie. But I felt like I did enough to win. I do think I have to go up in weight, because it’s effecting my performance. I still felt like I did a great job.”

But Angel Garcia, Danny’s father and trainer, is never satisfied. It’s why his son is so good.

“I thought Peterson was running a lot and was saving his energy for the last quarter of the fight,” Angel said. “Danny has a great chin. He got hit a lot with some good shots. I don’t know what that judge was thinking when he saw a draw. I think (moving up in weight) is the plan for the next fight.”

In the fourth round, Garcia had had enough of Peterson’s posturing and dancing. So he took a step back, looked Peterson in the eyes, shrugged his shoulders and motioned for him to come forward. Peterson just smiledÔÇöand resumed his evasive bouncing.

After six rounds, the fight was even. But in Round 8, a sense of frustration appeared to be building within Garcia, Peterson began tapping him. It was easily Peterson’s best round. He landed a few combinations and for once it was Garcia backing up and Peterson (33-3-1, 17 KOs) stepping forward. For once, Peterson was the aggressor and Garcia was on the defensive, taking as much punishment in one round as he ever has as a pro.

“I followed my plan all along, find where I can get my chances and then take them,” Peterson said. “I’m thinking of possibly moving up in weight. I’ll gladly fight (Garcia) again, if that’s what he wants. But it was hard enough getting him in the ring the first time. I’m not counting on it. I did my part. I’m not calling robbery. I fought a good fight. I don’t expect an easy journey for me to get where I’m going.”

Though in the ninth, after a thorough scolding in the corner from his father and trainer, Angel, a reinvigorated Garcia reverted back to the stalker. He was the one measuring Peterson and landing the more telling blows. Midway through the ninth, Garcia lowered his right shoulder and found a clear path to Peterson’s body. Inside of a minute left in the round, Garcia tagged Peterson with a right to the head.

Asked if Garcia wanted the winner of Floyd Mayweather Jr. and Manny Pacquiao, he just laughed.