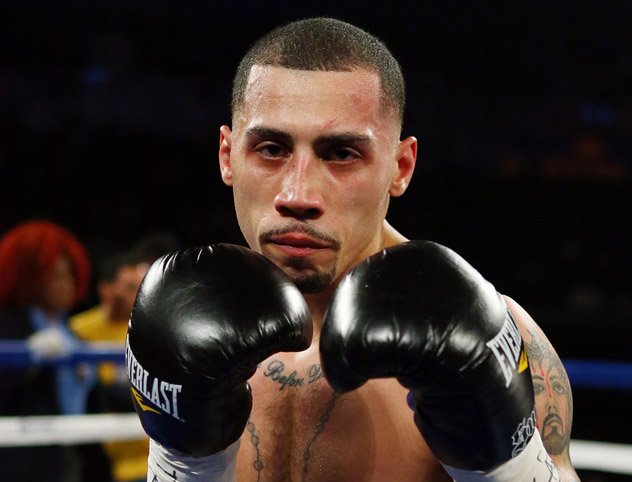 Brooklyn erupted for their “Rocky” in the main event from the Aviator complex in South Brooklyn on Friday night, and televised on Showtime’s “ShoBox: The New Generation.”

The junior middleweight scrap was set for eight or fewer rounds and saw Frank Galarza drop and stop Sheldon Moore in round three; a left hook caught Moore backing out and had him frazzled. Frankie flurried, a right hand was helpful, and finished the job.

The end came at 1:31, and the man also alternately called “Notorious” looked to the heavens when the time was announced. His euphoria was apparent, and he comes off like a man on a mission, one of redemption, stemming from his street forays as a teen, and also in a nod to a profound faith.

“I got warmed up and that was what I needed,” he said after. “I saw that he needed to plant” he noted, and that little bit of intel informed his attack. He stated that he knows he’s still learning on the job, but the learning curve seems flatter all the time.

In the first, Galarza shot the jab, looked to get warm, scouted the underdog. Moore snapped a decent jab, held his guard tight, looked to be comfy in there.

In the second, Galarza edged closer, went to the body, and dodged counters. A couple right crosses nicked him, no big deal.

In the third, Moore jabbed to the body, but then hit the deck. He couldn’t get up,

Ievgen Khytrov (8-0 entering with 8 KOs; living in Brooklyn; from Ukraine) took out Aaron Coley (9-0-1 with 6 KOs) in the second TV fight. Khytrov went lefty then righty in the first. Coley showed respect for the power and shot his right jab out to keep Khytrov at bay. Khytrov slipped his way in, showing better basics than I’ve seen before. In the second, Khytrov kept coming forward, insistent, his balance sometimes off, his intentions never so. Coley was in survivor mode a lot, grabbing. He ate two right hooks late in the third which resonated.

In the fourth, Khytrov weaved his way in, whacked with rights down low and up top, and didn’t have to deal with much coming back. In round five, Khytrov wanted to land the lead right, and mixed in some uppercuts, when he saw Coley’s head dipping. In the sixth, a right caught Coley. A filthy right to the side looked like it hurt too. Coley actually got bolder a couple times, knowing he was in deep water and near-ish to drowning, so he started kicking harder to stay afloat. In round seven, Coley was still in survivor mode. Same in the eighth, he wanted to see cards computed and he did. No drama with the decision; Khytrov took it, by scores of 78-74, 79-73, 79-73.

In the TV opener, Sergey Derevyanchenko (27-1 entering, with 10 KOs; from Ukraine) took on Alan Campa (13-1 with 9 KOs entering; from Mexico) in a super middleweight tussle.

Advertised as “The Technician,” indeed, Serge came out with a tight guard, on balance, slipped, ducked, jabbed, basically he looked to be a solid specimen. The taller foe, who wore throwback short shorts, looked to land a sneak hook. He mostly fought off the back foot in the first. Serge landed a nasty right cross in the second.

The Mexican didn’t want to let him burrow in, but noÔÇªa right hand knocked him to the mat, as he was backed into a corner, late in the second. A right to the body set up the head shot. The Technician was showing he was knowing what he was doing. In the third, Campa tried lefty. No better luck there, as Serge stalked him, leaving his face reddened and scratched. “Ohhhs” punctuated the air as the crowd dug Serge’s work and also showed their empathy with the Mexican.

In the fourth, the Mexican, who mostly slid left, ate power from both hands. Down he went, on his behind, after a flurry. He got up but the ref knew he was diminished. At 1:17 of the fourth, the arbiter stepped in to aid a man who wasn’t defending himself all that well. Promoter Lou DiBella was beyond enthused after. “He’s a beast,” the dealmaker said. “One of the best signings I’ve made. There’s some Golovkin in him! He’s relentless.”