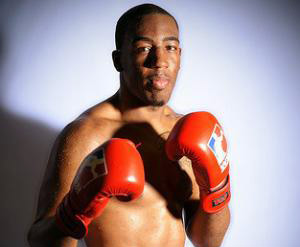 BETHLEHEM, Pa. – Donovan Dennis was a typical teenager growing up in Davenport, Iowa. Out there adrift, he’d sit around the house and watch TV, play video games, hang out. Each day, his mother would see him lounging around. Doing nothing. So she implored him to do something.

He did. The gangly 6-foot-4 southpaw choose something that he knew would piss her off. He found boxing.

On Friday night, before a packed crowd at Sands Casino Resort in Bethlehem, Pa., that little venture Dennis undertook at 14 took a big step by knocking out Razvan Cojanu at :59 of the second round in the heavyweight semifinals of the Boxcino Tournament, shown on ESPN2’s “Friday Night Fights.”

Dennis will take on Andrey Fedosov (27-3, 22 knockouts), the other heavyweight semi winner, in the Boxcino heavyweight final on May 22 at the Omega Products Outdoor Arena in Corona, California.

Dennis (12-1, 10 KOs) needed this. He’s on a three-fight winning streak since he got caught himself, when he suffered a first-round knockout last year to then-undefeated Nat Heaven, who has since been knocked out in the first round of his last two fights, once by Fedosov in February.

When Cojanu (13-2, 7 KOs) nailed Dennis with a straight right in the first, he stuck his tongue out at Dennis, who replied a round later with a straight left that landed right on Cojanu’s chin. It’s one of the most devastating knockouts of the year thus far.

“This is definitely a big leap for me,” said Dennis, whose last two victories have come in the Boxcino tournament. “(Cojanu) caught me with a straight right in the first, and after he stuck his tongue out at me, I had to react. I looked at him like, ‘Ok, you want to go there, I’m about to give you three more shots.’ No matter what I do my goal is never to let anyone get to me. If I have to hit you inside, outside, I’ll do what I have to do to win. I got caught with a big shot (against Heavens). I was trying to make things happen, instead of working and being patient. I wanted to knock him out in the first round, and instead I got knocked out.”

Dennis could have crawled into a hole after the Heaven kayo. He didn’t. Two days later, Dennis went right back into the gym.

“Being from Davenport, there’s not a lot of fighters from there,” Dennis said. “You have Antwun Echols, Michael Nunn, but that was 15, 20 years ago. Being from there, people look at you and think there’s no fighters. It almost puts a chip on your shoulders. It makes you work harder than the next person just to show them that we do have fighters. I was so angry after I got knocked out, I wanted to work out that night. But I went right back to work on Monday. That’s been my way since I was little. I started boxing my sophomore year of high school to make my mom mad. She wanted me to get out of the house and do something, so I’m going to go out and fight people. I never hid it from my mom. She would drive me to gym. But who wants to see their kid fight? I’ve always been that type of person. If you want to make me do something, I’m going to do something to make you mad, and then go back and do what I was doing before.”

It seems momÔÇöwhether she liked it or notÔÇöpushed her son in the right direction here.

In the other tournament fights, Fedosov rose from a first-round knockdown to stop Lenroy Thomas (19-4, 9KOs) at 1:01 of the third round.

“Thomas was a good opponent and fast,” Fedosov said. “On the first round knockdown, I wasn’t really hurt. He hit me with an unexpected shot. I’m very excited to be going to the finals. I know (Heaven) knocked out Dennis last year, but really, I don’t think about it because boxing has different styles. It doesn’t matter for me.”

As for Thomas, “I thought I had (Fedosov) hurt in the first round. In round three, he hit me with a good shot and it took out my legs.”

“I know Adams is a banger and I think I can go in and out box him,” Thompson said. “I learned (against Skorokhod) that I have to keep up my hands up a little more.”

Adams, who is on a three-fight winning streak, the last two coming in the Boxcino Tournament. “This means a lot for me,” Adams said. “I started it last year, but I didn’t finish it. I have to exclamation point on it. I only had six amateur fights before pro, so I’m still learning. Tonight was more about fighting inside. I learned to be more patient and figure things out when I’m in there. I’ll take that on to the finals. I’ve grown. My growth has got me to this win.”