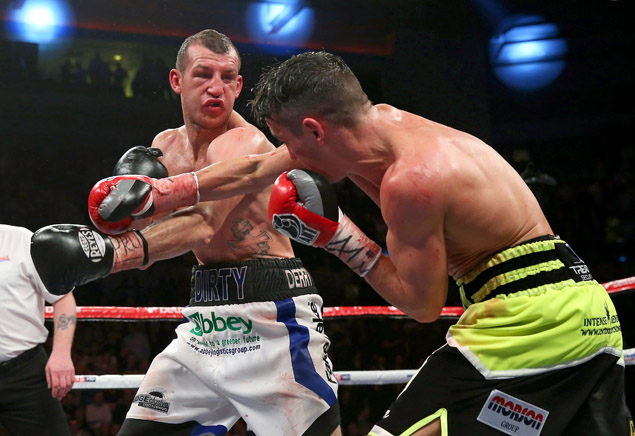 It was announced today that British lightweight Derry Mathews will meet unbeaten knockout artist Ismael Barroso in Liverpool, England, on April 18, after WBA titleholder Richar Abril postponed a fight against him for a second time.

Abril reportedly withdrew on the first occasion due to a fever which was brought on by a mosquito bite, and has been forced to pull out again because the after-effects of the virus left him unable to train.

Southpaw Barroso, from El Tigre, Venezuela, is 17-0-2 (16 knockouts). Mathews will be the first distinguished opponent he will have faced but, despite the short notice, a puncher of his caliber cannot be underestimated.

“Barroso is a very dangerous fighter,” confirmed Mathews, via a press release from Queensberry Promotions. “Just look at his record, he’s banging people out left, right and center.

“I’ve seen some footage of him and he’s strong, with big right hands and left hooks. He can take you clean out, but I’m not going to be in a position to let him do that to me.”

He said, “Barroso is not on my level and I can use all of my experience as an advantage. It’s unfortunate that Abril’s pulled out again, but things happen for a reason.

“I’m in with a massive puncher, but I can punch a bit myself so the crowd will be in for an exciting fight and I can see me flattening him. If the opportunity comes to take him out early I’ll take it, but I know I’ve got to be smart in there.”