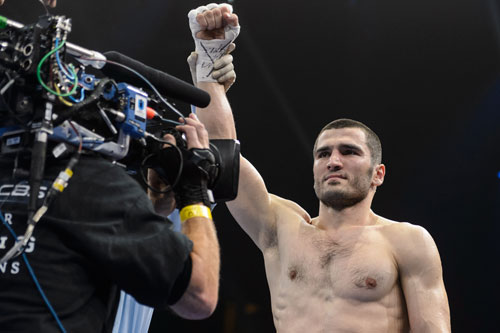 Artur Beterbiev: This is another case in which it’s important to reign in our enthusiasm to some degree, at least for now. Beterbiev’s fourth-round knockout of veteran Gabriel Campillo on the Adonis Stevenson-Sakio Bika card Saturday in Quebec City was chilling. The Russian broke down a capable, experienced opponent in about 10 minutes before two crushing blows to the head instantly ended matters at 2:22 of the fourth, leaving Campillo to wonder what the hell hit him and underscoring Beterbiev’s reputation as a menacing predator even though he has fought professionally only eight times. Let’s not get carried away, though. Campillo (25-7, 12 knockouts) clearly was a step up for Beterbiev (8-0, 8 KOs) but not quite the fighter with whom we were so impressed a few years ago, the slick, durable one who seemed to end up on the wrong end of controversial decisions. The Spaniard is now 4-4 in his last eight fights, including KO losses to Sergey Kovalev, Andrzej Fonfara and now Beterbiev that undoubtedly have taken a toll on him. I think Campillo remains a solid fighter but not in the class of the top 175-pounders, meaning he was an interesting opponent but no great threat to Beterbiev. So we should enjoy the rise of yet another Russian-speaking beast but take it a step at a time. I want to see how Beterbiev does against one of the best light heavyweights. I have a feeling he’ll hold his own – at the very least.

Stevenson over Bika: What did you expect? Bika had been a solid, tough super middleweight with limited punching power. He clearly was a longshot to beat a legitimate light heavyweight like Stevenson in his first fight as a true 175-pounder, which made him a relatively safe opponent for the RING champion. This isn’t to say that Stevenson (26-1, 21 KOs) doesn’t deserve credit for his one-sided-decision victory, in which he put Bika (32-7-3, 21 KOs) down twice. He does. Bika is a good, determined fighter. And this definitely isn’t to say that Stevenson doesn’t remain one of the best light heavyweights in the world. He does. In fact, I don’t think he receives enough credit. I see his limitations. He relies primarily on his big left hand to win fights, which typically isn’t a recipe for prolonged success. He does win fights, though. He hasn’t lost since he was stopped by pesky Darnell Boone in 2010. He has won 13 in a row since against some good opposition, including Boone in a rematch. He’s obviously doing something right. Of course, we would know exactly where Stevenson stands (or falls) if he were to get into the ring with Kovalev, the matchup everyone wants to see. I’m with the majority who believe Kovalev, a more complete fighter, would win but Stevenson is no pushover. The Haitian-Canadian is a terrific athlete with a fighter’s heart. And he has that power.

Heavyweight prospect Anthony Joshua (11-0, 11 KOs) stopped veteran journeyman Jason Gavern (26-20-4, 11 KOs) in three rounds Saturday in Newcastle, England. Joshua faces another veteran – Kevin Johnson – on May 30 in London. I look forward to him facing a legitimate test. ÔÇª Petr Petrov (36-4-2, 17 KOs) probably was written off by many after Marcos Maidana put the Russian away in only four rounds in 2011 in Argentina. The lightweight contender is 7-1 since, including a one-sided decision victory over sly veteran Gamaliel Diaz (38-12-3, 17 KOs) on Friday in Corona, Calif., that brings him closer to a title shot. Petrov is nothing like fellow Russians Kovalev and Beterbiev. He relies more on his quickness and defense to win fights. And that’s working well for him. … Junior middleweight Julian Williams (19-0-1, 11 KOs) continued to roll, shutting out Joey Hernandez in a 10-round bout on the Stevenson-Bika card. Williams, a 25-year-old from Philadelphia, has climbed into the ratings and should receive a title shot sometime soon. ÔÇª I’m a bit disappointed in Amir Khan. The quick-handed Briton has rebuilt his reputation as one of the best fighters in the world in or around the welterweight division. He should take advantage of his momentum by getting into the ring with a top-tier opponent. And that doesn’t include Chris Algieri. He’s wasting time.