Is the chilled-out Floyd Mayweather Jr. for promotion or for real? 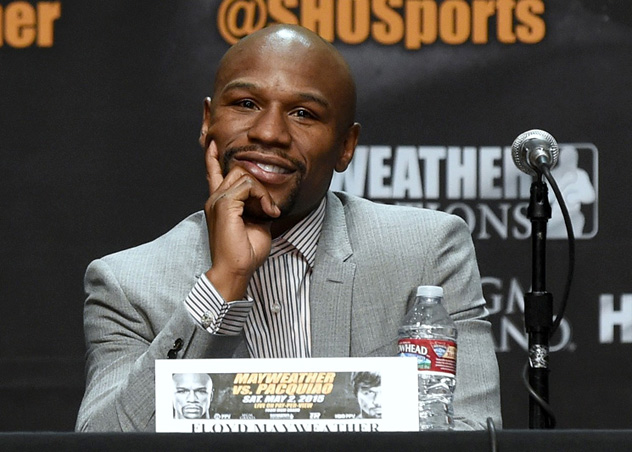 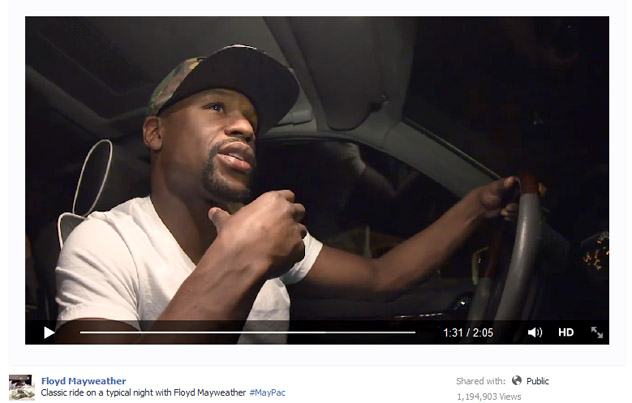 Could it be that he has seen the light, has been, perhaps, humbled into becoming less brash, more contemplative, more positive?

Sort of seems that way, as we assess Floyd “Money” Mayweather with less than a month to go until the ‘Clash for All the Cash’-bout with Manny Pacquiao – notice I say “with” because this is a sum-of-the-parts situation, only because they came together will this sort of revenue be generated – on May 2.

Our man Freddie Roach is trying as he might to make the buildup semi-interesting, busting chops on Floyd, his pop, and thus far, Floyd really ain’t playin’ along.

The only hint of drama, I think we had, came when Uncle Jeff went rogue, and talked about Floyd having his way with proud vet Zab Judah in sparring. He backtracked hard, leaving us to wonder if he got smacked down and the aura of near serenity has us wondering and believing that this is a tactic, a strategy.

Be chill, be cool, be classy. No loose cannon stuff, just concentrate on the task at hand. It would fit, I’d say with the overall tonal presentation of what Mayweather advisor Al Haymon is looking to do with his revitalization/re-branding flurry. You see the fighters gussied up in suits ‘n ties for promo shoots for PBC events, and the bad-actor exploits of the Adrien Broners and Mayweathers are by no means played up. I guess the thinking is: the mainstream is more likely to embrace us en masse if we don’t have much in the way of baggage, of TMZ-type material kicking around.

I spoke to Roach about this chill Floyd and he wasn’t buying it. You’ll recall Floyd has gone hard at Manny, mocking him hard not that long ago. He had to apologize for a rant which went off the rails on Ustream in September 2010, some might recall. “When Manny beats Floyd, I will feel a little bad for Mayweather,” Roach told me. “But he’s no role model, he’s not that good a person. There’s a white hat and black hat (in this fight). One is a good guy and one is a bad guy. I got the good guy.”

Roach of course adores his guy, and sees Pacman with a halo over-head, I think. Now, Manny actually will publicly admit he’s in the past given in to darker impulses, gambling and lady-chasing, before seeing the light. (Literally, he’s Born Again and is more so addicted to reading the Bible than anything else, as far as I know.)

Mayweather isn’t as keen to go there, and talk about his stint in jail (summer 2012) for assaulting Josie Harris, mother to three of his children. Money-iacs recall that his out-of-the-ring shenanigans have been discussed in prior buildups to his fights, to an extent. A few times, lawsuits from people accusing him of some infraction or another seem to be timed to gain maximum attention by being pegged to one of his bouts. Terms of a suit and accusations from an ex galpal were leaked right before Mayweather’s September 2014 clash against Marcos Maidana.

Roach told me that for the good of the sport, he “wishes Mayweather were a better role model for the young kids.”

We saw some of a good role model in a recent promo video snippet, in which Floyd said he sometimes turns down autograph and photo requests because he wants to pay full attention to his kids. That’s surely a message Roach can embrace more so than the blatant idolatry of money, never mind the behavior which spurred an incarceration stretch. Listen, stranger things have happened than an almost-40-year-old man “getting it,” owning a better grasp of what really matters, and settling into a pattern of behavior and living which doesn’t feature regular missteps of judgement. I’m with Roach, old school I guess you can call it, and find it easier to justify the sport and its place in the grand scheme of athletics and life when its top practitioners are solid citizens. Then again, the old “good guy vs. bad guy” construct is so easy to sell, and it gets results. We will have to see if promo material being shot the last few weeks and unspooling in the next month chooses to go that route, or the better angel side of “Money” will be the over-riding persona on display.