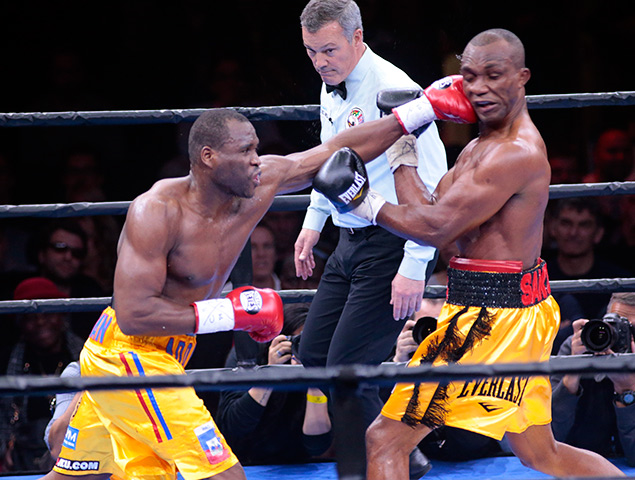 Adonis Stevenson made the fifth defense of his RING/WBC light heavyweight titles with a unanimous decision over former super middleweight beltholder Sakio Bika on Saturday at Pepsi Coliseum in Quebec City, Quebec. Stevenson, who won by scores of 116-110, 115-110 and 115-111, scored knockdowns in Round 6 and 9.

Stevenson (26-1, 21 knockouts), a 37-year-old southpaw boxer-puncher from Montreal by way of Haiti, was in command for most of the bout. THE RING’s Fighter of the Year for 2013 found Bika (32-7-3, 21 KOs) to be an easy target for his jab and powerful left hand, which loaded up and fired to body and head throughout the fight. 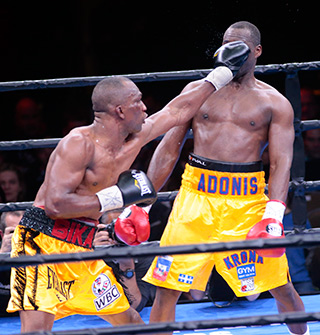 However, Bika, a 14-year veteran from Australia by way of Cameroon, didn’t go quietly. The 35-year-old perennial contender at 168 pounds absorbed most of Stevenson’s power shots with a sneer, and the former WBC titleholder had some success in the middle rounds when he was able to crowd the hometown champion to the ropes. Bika made the final two rounds interesting by connecting with a solid hook in Round 11 and a few right crosses in Round 12. But despite his vaunted chin, awkward brawling style and roughhouse tactics, Bika’s poor balance and slow feet prevented him from getting any significant work down against the fresher, faster and more mobile Stevenson.

After the fight, which was part of the Premier Boxing Champions series and televised live on CBS in the U.S., Stevenson acknowledged Bika’s determination.

“I know Sakio Bika was tough guy, so I prepared for 12 rounds,” he said.

There was no mention of Sergey Kovalev, THE RING’s No. 1-rated light heavyweight and 2014 Fighter of the Year, during the post-fight interview. Many fans believe that Stevenson has avoided fighting the Russian boxer-puncher, who holds the IBF, WBA and WBO titles and owns a shutout decision over Bernard Hopkins. Stevenson told HBO commentators that he wanted to face Kovalev this year after Kovalev’s eighth-round stoppage of former champ Jean Pascal in Montreal last month.

Time will tell if Stevenson keeps his word.