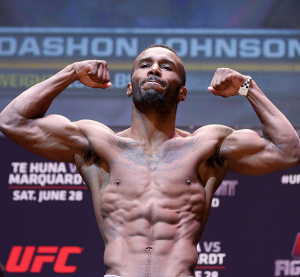 Former UFC fighter Dashon Johnson has joined Manny Pacquiao’s camp as one of his sparring partners ahead of Pacquiao’s May 2 clash with Floyd Mayweather Jr.

The 27-year-old Johnson, of Escondido, California, has worked with Pacquiao five times for three to four rounds at a time since coming to the Wild Card Boxing Club in Hollywood, California, two weeks ago.

Johnson, who lost twice in UFC fights in 2014 before being released from the company, cold-called Pacquiao’s trainer Freddie Roach offering his services in camp with Pacquiao. Johnson says he is impressed by what he has seen from Pacquiao in the gym.

“Pacquiao’s work ethic isn’t like anything I’ve ever seen,” Johnson says. “He’s such a hard worker and has a solid group of guys around him always pushing him to the limit and giving him positive encouragement. He’s one of the hardest workers I’ve ever seen and I’ve been around and trained with a lot of world champions.”

Johnson, known as Fly Boy, turned pro as a boxer in 2008 and has a record of 15-19-3 (5 knockouts). Johnson has fought between welterweight and light heavyweight against a number of name contenders and prospects, including former WBC 154-pound titleholder Sergio Mora, former Pacquiao sparring partner Glen Tapia, and top-10 junior middleweight Jermell Charlo.

Johnson says his style isn’t particularly like that of Mayweather, which relies heavily on a shoulder roll defense and countering with straight right hands, but he says he has no problem playing “Money” Mayweather in the gym.

“My style isn’t necessarily Mayweather’s in real life, but I can definitely emulate his style very well and not to mention I’m the exact same size as Mayweather as far as reach and height and size,” said the 5-foot-9 Johnson.

Johnson is confident that Pacquiao (57-5-2, 38 knockouts) can become the first person to defeat Floyd Mayweather Jr (47-0, 26 KOs) when they finally clash at the MGM Grand in Las Vegas. And not necessarily by decision.

“Manny is looking unbelievable right now and honestly I don’t see the fight going the distance at all.”