Chris Algieri to train with John David Jackson, wants Khan or Broner next 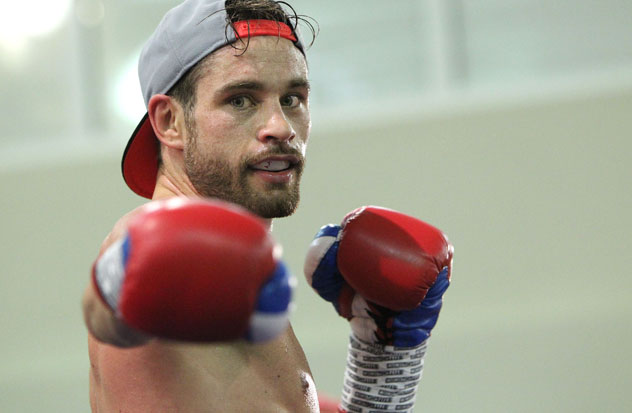 It didn’t go his way last time out, to put it understated fashion. Chris Algieri was sent to the deck by Manny Pacquiao six times when they clashed last November and bless his soul, the Long Island-based boxer isn’t in a mode to get back in the ring against a “gimme” foe.

No indeed, the 31-year-old ex kickboxing champ tells RingTV.com that he wants to show the world that wasn’t him in Macau, that he is an A-grade pugilist who wants to prove it against another A-grade sort.

Adrien Broner, perhaps? Or Amir Khan, as has been the rumor kicking around?

“I love both fights actually,” he told me on Tuesday night. “I’ve been in the gym working and I want to get back in the win column.”

The fighter’s confident aura seemingly hasn’t been dimmed by the loss to the Congressman, and he believes sincerely that his chops will be on bright display the next time he gloves up, because of an addition to the mix. Ace trainer John David Jackson, who tutors light heavyweight destroyer Sergey Kovalev, has been enlisted into Team Algieri.

“We are so excited for his addition and the sky is the limit with a world class coach like John David Jackson,” Algieri (20-1, 8 KOs) said. “I keep hearing my name mentioned with Khan’s – let’s do it. I want to get right back to the level where I feel I belong. The Pacquiao fight was not my night. It’s time for me to get back in with a high-level opponent and show the world the real Chris Algieri.”

I spoke to another fella close to Algieri, who gave me some lowdown on where his head is following that disappointing loss. “Everyone thinks he was a one-hit wonder,” the source said, citing Algieri’s June 2014 win over Ruslan Provodnikov. “He had a horrible night against Manny, and he’s now bringing in a top level coach. And rather than take a tune up fight, he wants to show the world he’s an elite fighter, and what he’s capable of. A fight against Khan is huge in New York,” the cohort continued. “Khan has done big numbers here, and three of his big wins have come against New York guys, Luis Collazo, Zab Judah and Paul Malignaggi. Chris doesn’t think he’d be number four!”

Vegas would be fine, the guy said, adding that the Star Boxing-promoted fighter simply wants a piece of Khan, wherever it occurs. “Khan is a big draw there and his people like Vegas and like to gamble so financially it makes sense. Amir needs to fight by the end of May. Chris is ready for that! May 30, maybeÔÇªthat would be perfect for Chris!”

My take: Algieri showed stones galore getting up against Ruslan, and against Manny. A tweak or two from a JDJ could absolutely pay immense dividends, as the avocado advocate looks to be the possessor of much raw talent, and athleticism. And yes, I’m impressed in this day and age, he wants to come back tough, and is calling for the big dogs, and craves a chance to bite back, and show the fans he’s no one hit wonder.