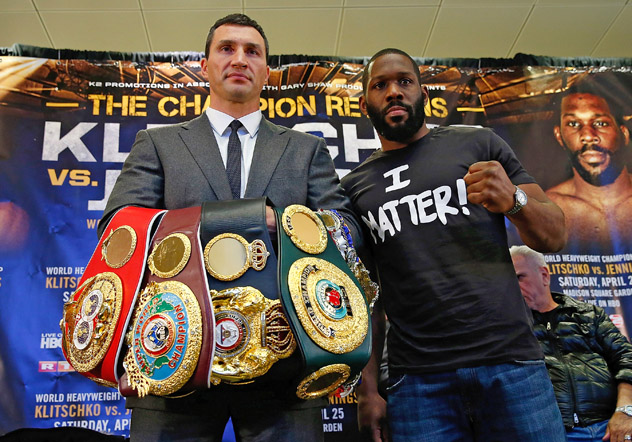 The interview got off to an iffy start, with the boxer telling me he wasn’t so much in a mood to answer questions at that time.

I didn’t take it a bit to heart, understanding that he had a fight, the big one, coming up in a scant few weeks.

What, Bryant Jennings (19-0, 10 knockouts) wants to hear the same ad nauseum queries from me? How is camp? Who are you sparring with? How are you going to try and beat RING heavyweight champion Wladimir Klitschko April 25 at Madison Square Garden?

Can’t blame the Philly-based boxer for doing his best clamshell imitation on me. But pretty quick, I got to the crux of the matter, figured out why the 30-year-old wasn’t in a mood to be peppered. It turns out he’s more than a little irked about what he’s hearing about the fight and what he’s not hearing.

Jennings has a heavy presence on social media. I think the dude is Instagram champion of the pugilistic world. He certainly makes his presence felt there and anyone who cares to take a bit of time can get updates on his boxing, and even more so, his mindset, his point of view, his philosophy as an athlete and a man of the world, his world being that prototypical humble upbringing scenario which helps break so many souls made of less sturdy composition than Jennings, who only started boxing in 2009. Get that through your head, this is the consummate late starter…

Jennings was kind enough to answer my unimaginative questions, such as how camp is going. He’s training in Houston, out of sight and mind of the northeast, which has featured the Never-Ending Winter from Hell. He didn’t wish to give any hints on whom he is sparring with but told me his trainer, Fred Jenkins, is helping prep him physically and strategically, to give a hell of an account of himself.

“Everything is good,” the boxer, promoted by Gary Shaw, told me. “My stamina is strong; my mentality is strong. Of course, I’m not perfect and we all want to be perfect but I’m understanding more; I’m learning. If I don’t know something, I learn as I go.”

Pretty quick after you get rapping with Jennings, you realize he is a tad more…introspective, I guess, is a good word, than many – if not most – boxers. He pondersÔÇªhe dissects. Case in point: If Jennings manages to do something no one has done to Klitschko (63-3 with 53 KOs), 39, since 2004, beat him, he will be your first vegan heavyweight champion of the ages. His last bite of chicken, he told me, came in Aug. 2013 and that change of diet came after he did a deep dive into what sort of chemicals are being put into animals we eat now, as opposed to 20-to-30 years ago.

Jennings has put his time into studying nutrition, for him, for his son, age 6. And even more of late, he’s been thinking of his chances in this bout and a bit about how the masses of fight fans are seeing his chances.

There is still room to hop on aboard the Jenkins bandwagon but don’t be trying to snag a ticket and tell him on April 26 that you knew what was going to happen on April 25, he says. “I’ve been getting a lot of good feedback from Philly fans and, of course, on social media. It can be crazy; anyone across the world can say anything. To a weaker person, it could penetrate their mentality but that’s bad energy and I want positive energy only. Listen, I’m not going to beg anyone to get on [my bandwagon]. But [naysayers] should all write down their words and put it on their refrigerator because they’re going to eat them!”

Jennings had said at the main presser for the contest that someone would be getting stopped in all likelihood on April 25. He’s upgraded his take, it seems, and spit some Philly fury/confidence when I asked what would occur in NYC on April 25: “On April 25, what’s going down? Wladimir Klitschko is going down.”

My take: After a couple chats with Jennings, I found myself rooting for him as a human being. He’s a role model, embraces that responsibility, mirrors my own beliefs that money alone doesn’t make the man, knows that familial roots are key to happiness and success and there’s nothing robotic about him. He’s a dissector and, frankly, one of the more obvious ones I’ve come across among those getting so close to this top of the pugilistic mountain. “Bryant,” I said to him, “you think a lot, huh? It’s not the easiest way to be.” He allowed that, no, he’s not someone who goes through the motions, floats along the waves, living an unexamined life as he strives to join Deontay Wilder as an American heavyweight champ.

We could do, I think, a whole heckuva lot worse than Bryant Jennings if the man pulls off a considerable upset on a master pugilist in NYC. C’mon, having a vegan heavyweight champion would be cool, no?