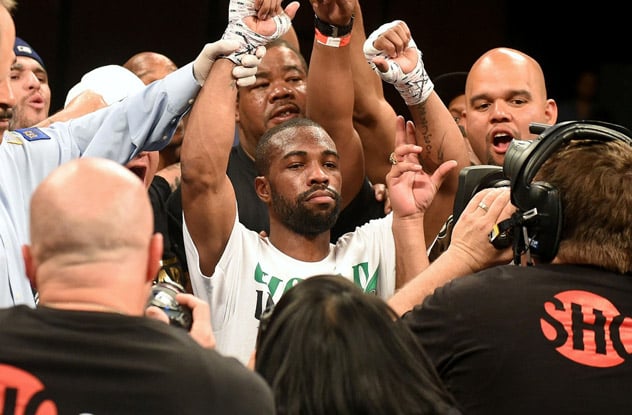 Gary Russell Jr.: Russell has finally arrived. And that’s saying something considering the former U.S. Olympian’s performance against Vasyl Lomachenko last June, when his first important fight ended in a bitter setback. Many questioned in retrospect whether he was ready for such a special opponent given his thin pro resume. Some even wondered whether he was as good as he has always been billed. No one is wondering now. Russell initially outboxed and then blew out veteran Jhonny Gonzalez, winning by a fourth-round knockout to take Gonzalez’s WBC featherweight title and take a giant step forward in his career. The tough, experienced Mexican went down three times before referee Tony Weeks stopped it 37 seconds into Round 4. That was the kind of statement for which fans of Russell (26-1, 15 knockouts) have been waiting since he turned pro amid considerable hype in 2009. He not only beat a proven commodity, he overwhelmed him with his speed and then power. And, remember, Gonzalez is no joke. Lest you forget, Gonzalez, one of the biggest punchers in the sport, was only three fights removed from stopping Abner Mares in the first round to win the WBC belt. Yes, it was quite a night for the young fighter from Washington, D.C. I have a feeling there will be many more in his future.

Jhonny Gonzalez: Funny how things turn out. Gonzalez (57-9, 48 KOs) was seen by some as too shopworn after so many wars to beat Mares when they fought in August of 2013. We know what happened there. Gonzalez scored a stunning knockout to win a major championship and remain as relevant as a fighter can be. Now, after he was thrashed by Russell in a high-profile fight, people will again wonder whether his time has passed. I don’t think it has. Gonzalez has a tremendous resume, one that reveals a fighter who has been at or near the top of heap for more than a decade. That’s impressive, to say the least. Yes, he has been through many wars. The knockout loss to Russell was the fourth in Gonzalez’s career. And, aside from the surprise knockout of Mares, he hadn’t recorded a truly important victory since he outpointed Elio Rojas in 2012. At the same time, he’s only 33, which is hardly ancient these days. And a recent decision to work with a fitness coach can only help. He also still has that punching power, a weapon that can keep him in almost any fight. Gonzalez probably can see his retirement off in the distance but, more than likely, it’ll take him a while to get there.

The fact IBF titleholder Kell Brook (34-0, 23 KOs) made it into the ring made him a big winner given that his leg was slashed with a machete while on vacation in Tenerife less than six months ago. It certainly played no role in his fight against durable Jo Jo Dan (34-3, 18 KOs) on Saturday in Brook’s hometown of Sheffield, England. Brook put his solid, but completely overmatched foe down four times – twice in the second, twice in the fourth – and Dan failed to come out for the start of the fifth round. The night couldn’t have gone much better for Brook, who was making the first defense of the title he won by outpointing Shawn Porter last August in Carson, California. “I didn’t think I would walk again, never mind box again. Now I’m here defending my title,” Brook told BBC Sport. Now Brook must face a legitimate threat. And that could come in the form of fellow Englishman Amir Khan in what would be an enormous matchup in the U.K. Eddie Hearn, Brook’s promoter, said he would like to stage that fight on June 13 at Wembley Stadium, which was packed with 80,000 fans for Carl Froch-George Groves II last May. I hope Khan takes the fight. It would be a special night.

Jermell Charlo (26-0, 11 KOs) made a strong statement in his unanimous-decision victory over Vanes Martirosyan (35-2-1, 21 KOs) in a 10-round junior middleweight fight on the Russell-Gonzalez card. Martirosyan, the former U.S. Olympian, was a stiff test for the young contender from Houston. He passed it with his sharp jab and punches that were more accurate – and eye-catching – than those of his more-experienced opponent. Charlo is ready to take the next step. The scores were 97-93, 96-94 and 96-94. I had what I thought was a very close fight 96-94 for Charlo. I don’t want to be too critical of Adalaide Byrd’s 97-93, which isn’t outrageous, but the fight was closer than that. ÔÇª I know Nonito Donaire (34-3, 22 KOs) and his handlers wanted the former champion to make a big splash in his return to 122 pounds and the Philippines – where he hadn’t fought since 2009 – but couldn’t they have found an opponent who was alive? Someone named William Prado (22-5-1, 15 KOs) brought absolutely nothing into the ring and was promptly stopped in the second round of their fight Saturday in Manila, Donaire’s first fight since he was knocked out by Nicholas Walters in October. Prado, a Brazilian, was 3-3 in his previous six fights and not one of his three victims has a single victory. The guy was in way over his head. Sad to see. ÔÇª RING and WBO junior flyweight champ Donnie Nietes (35-1-4, 21 KOs) successfully defended his title against Gilberto Parra (19-3, 17 KOs) on the Manila card, scoring a ninth-round KO. Parra was rated by two sanctioning bodies (including the WBO) but had only a puncher’s chance against Nietes, who put the Mexican down in the eighth and rendered him unable to continue after the ninth. ÔÇª It was a pleasure to hear analyst Jim Watt during the Brook-Dan fight on Showtime. I have a lot of respect for American analysts Paulie Malignaggi, Andre Ward and Roy Jones Jr. Watt is my favorite, though. He obviously knows his stuff and expresses himself articulately and with passion. And, for whatever reason, I can understand him perfectly in spite of his Scottish accent.